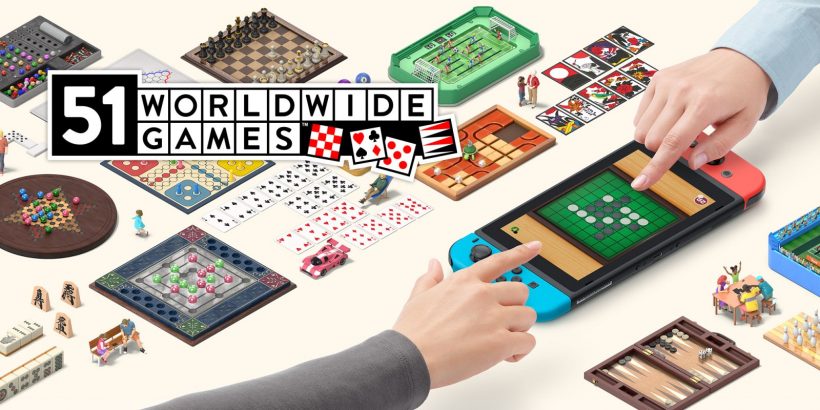 Aside from Mario, Zelda, and Nintendogs because, well, Nintendogs, there is little else that epitomises the Nintendo brand better than a collection of classics from around the world that come accompanied by comforting supermarket music and unreliable netcode. With 51 Worldwide Games offering intrigue and delight during the recent Nintendo Direct, the general consensus was that the timing couldn’t be better for the successor to the 2005 DS title, 42 All-Time Classics, to release.

The clue is in the name on this one, however, the ambiguity attached to ‘classics’ will be apparent from the off. Whilst the likes of Ludo, Backgammon and Dominoes are the undisputed kings of classic games, the status of Shogi, Hare and Hounds and Mancala are a little more dubious. A mixed bag of eclectic titles are available, and, as to be expected when 51 games are packaged together, there are as many ‘must play’ titles as there are ‘wouldn’t be missed’ ones. The games that fit into the latter category are those reliant solely on luck, or, in the case of card games like ‘War’, could be played out in their entirety without any user input.

The video footage leading up to the release of Worldwide Games couldn’t have been clearer: this is very much a multiplayer affair. There are single player games to enjoy, however, this will be short-lived. The same can be said for the games that can be played with an AI opponent as they are, on the whole, too easy and fail to replicate the fun that can be had between friends. Even then, there is a stipulation: 51 Worldwide Games is only as good as the people you are playing with.

Online competition is heavily reliant on a stable internet connection and good sportsmanship. If either of these are lacking in 51 Worldwide Games, it can result in a sub-par experience when compared to its real-life counterparts. The online offering is mostly solid with only the occasional connection issue; however, it is quite apparent whenever there is one – an intermittent one second pause whilst moving a chess piece will grate on anyone. When performance is smooth, there is still a chance that the opponent decides they’ve had enough of your tense game of Dots and Boxes and calls it a day. With no system in place with online penalties for such indiscretions, there is the potential for this to happen all too often.

Local multiplayer is where this game comes into its own and although there may be an argument to say that many of these experiences can be replicated with pencil and paper, some counters, a deck of cards and a chessboard, the Worldwide Games package is a creative combination of charm, comfort and convenience that definitely cannot be recreated.

A testament to Nintendo and the hardware they have developed, 51 Worldwide Games provides a number of ingenious ways to play. Unsurprisingly, motion controls make an appearance in the Bowling and Darts games, proving once again that you can’t beat a bit of light-hearted camaraderie whilst waving a Joy-Con around. The controls are fluid and fairly accurate, making these games a joy to play. Not only that, but the touch screen has also been put to good use. For example, Air Hockey can be played by placing the Switch vertically between two players – a welcome inclusion and another exciting way to enjoy a classic.

Mosaic Mode and Guest Mode are where things get interesting. The former sees a group of players play locally by combining their Switch screens to increase the area and change the design of some games, including Tank Battle. No other console can do what the Switch can in this regard and whilst it will be most often used as a party trick rather than a preferred way to play, it’s yet another example of intelligent hardware design.

That being said, Guest Mode is likely to be the most popular of all the features: it allows a player who doesn’t own the game to download a free ‘guest’ version so that they can play locally with a friend. Well played, Nintendo.

There are a few quality of life improvements which would improve the appeal. Being able to auto-finish a game once a player has won is one such example, as is the acknowledgement that the albeit helpful tutorials have already been watched and don’t need to be shared with the player every time they load a game. There are only so many times players will be able to stomach the sickly-sweet humour of those plastic presenters.

51 Worldwide Games is the poster child for the quote ‘less is more.’ By omitting some of the less engaging titles, the opportunity to develop some of the others in more detail would have presented itself. As it is, the ‘classic’ collection leaves something to be desired whilst still retaining all that we enjoy about Nintendo.

51 Worldwide Classics is a mixed bag of strategy and luck that can be experienced in a number of creative ways. Mileage may vary, but there is something here for everyone to enjoy, particularly during this difficult time.