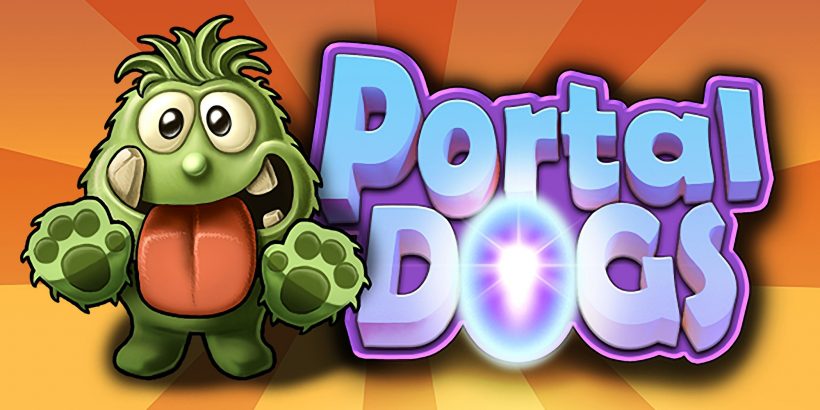 How many of you can pat your head while rubbing your belly at the same time? There may just be a platform game for you out now on the Switch eShop.

Portal Dogs is a puzzle-platformer from five-man team Brain Connected. The game has you playing as a crown-wearing king of the dogs – well, they’re supposed to be dogs, but they all look so ugly that they might well be a distant cousin of the Gruffalo – who has to traverse hazards in order to reach each level’s crown-wearing portal. That, of course, is pretty standard platforming fare, but the unique aspect here is the other dogs along the way which must, in turn, be guided to their own portals. These dogs, when under your command, will mimic your movements, so you’ll be controlling multiple characters on the screen at once, increasing the amount of danger that you’ll need to watch out for.

You can’t just move dogs to whichever portal is nearest willy-nilly, however. Dogs are split into a small number of different types, each with their own characteristics which affect the way you need to move them around the level. The standard dog can run and jump normally, but as you progress through the levels you’ll find dogs which might run automatically in the direction they face, a dog in a minecart who can move side-to-side but who is unable to jump, or even a dog in a spring which constantly bounces and as a result is a tricky one to keep out of harm’s way. Otherwise, there’s a red fireproof dog, a tadpole-ish-shaped dog who can negotiate tight spaces but who is woefully underused, and the purplish dog who is the biggest pain in the ass on account of them moving left and right in the opposite direction to the player-controlled character.

Hazards can include spikes, tank-like enemies rolling along the ground and UFO-like enemies moving from side-to-side in the air. Of particular danger, though, are moving platforms, and that’s because of the arguable standout drawback of Portal Dogs. Platforming is always judged on how precise the jumping is, as one wrong move can have you fall onto or walk into spikes or enemies and pop into a burst of stars. That precision isn’t quite where it should be here, and the number of times a dog sailed into the abyss when landing a jump that was adamant was going to land perfectly on the edge of a platform was too much.

It’s unfair to judge Portal Dogs on that issue, though – this is a fun if a little simplistic game. It certainly feels low-budget, with the menu screen, in particular, looking like something from a Flash game and scrolling through locked levels resulting in the highlighted selector going AWOL, but there are some neat ideas here, particularly in managing the different types of dogs to their respective end-goals. Fully completing the game means you take the dog king to his goal, take all the other dogs to theirs (only one or two levels allow for one dog to be sacrificed to have another progress) and to collect a golden bone. Doing this will add a ‘perfect’ icon to the level on the level select screen, but there’s no real reward for 100%-ing every level.

Pretty underwhelming, overall, though factoring in the good ideas and the irritating platform, Portal Dogs gets a middle-of-the-road score.

Portal Dogs has some clever platforming ideas in the way multiple dogs are controlled at the same time using the same movements. It’s nothing outstanding, however, and the sometimes irritating precision of the controls means it’s another of the many platformers on the Switch eShop.