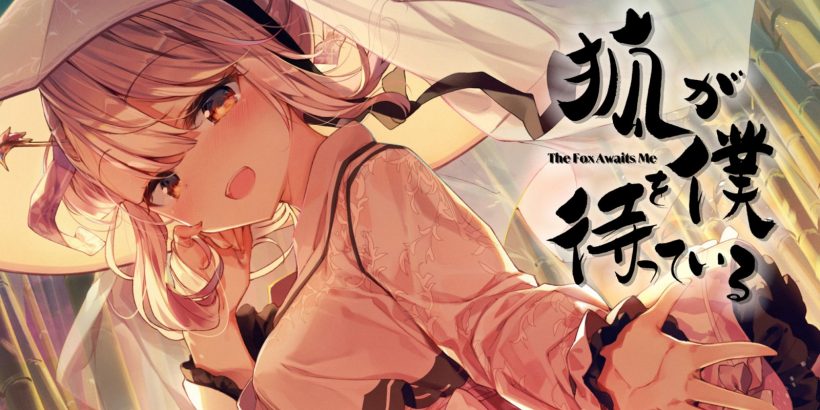 When firing up a visual novel, it’s always my hope that the story is more than meets the eye. So, it was a pleasure to see that The Fox Awaits Me isn’t about romancing anime girls, despite first impressions.

We’re immediately faced with some eye-roll-worthy tropes: our main character, Kaito, is a young man with amnesia and an uncanny magnetism that draws in flirty young ladies. The pink-haired fox girl, Shua, recognizes him and works to help him recover his memories. Once Kaito happens upon Mountain Deity Mimiru and Grim Reaper Karin, we start to learn even more tidbits about our past and theirs – but for each answer, more questions arise.

As for how they’re presented, these mystical ladies are the usual fare: scanty or dishevelled clothing, risque curves, and questionable ages – all blushing, posing, and giggling for our unseen hero despite the fact that, as far as he knows, he’s a nobody. But, just as in Doki Doki Literature Club, these adorable exteriors house some dark secrets.

Unfortunately, you will encounter technical issues. Their portraits have simple swaying animations, but I often experienced horrible lag during close-ups or crowded scenes. Several times, I thought that this game would’ve done better to present its beautiful art in static portraits.

Additionally, splash text can also get messed up, spilling off the side of the screen instead of wrapping and staying centred. I fixed this by going in and out of the menu, but it was a persistent issue that broke the tension. The good news is that we’re treated to a great soundtrack (as well as the ability to fine-tune volume) and full voice acting for the girls in both Korean and Japanese. It was fun to try both languages, as the different voices bring new personality to the characters.

The game takes place over the course of a week, amounting to several real-life hours without using R to skip – about the time it’d take to read a physical novel. Events escalate as the days go by, and it’s mostly railroaded. There is no autosave, and a few of the game’s “bad” endings occur from seemingly benign decisions, so it’s wise to save before making any choices.

Saving frequently not only helps you recover progress in the event of an unexpected death, but it also allows you to try different options later and unlock new scenes or endings. Although there aren’t many decisions to be made, they do affect the endings you can encounter; there are several, and even the “bad” ones reveal different aspects of the truth. However, there’s only one “true” ending that unveils the sinister centre of this story.

All of the big moments, as well as some extra background information, video clips, and achievements, can be reviewed from the main menu. It’s a real treat for collectors, as there’s a lot to dig up, and it’s not necessarily easy to find; there is simply no way to tick all of the boxes in a single playthrough.

Till the last, you are constantly left guessing who can be trusted, and what their motivations are. At one moment, you might be in the midst of a full-on comic relief scene, and the next, you’re questioning your very existence. Thankfully, the answers aren’t pulled out from thin air, but rather dangled just out of our reach from the get-go. It’s the mark of a thrilling page-turner for a rainy day.

The Fox Awaits Me leads players on a satisfying and thrilling journey. Despite players having relatively few choices, there is plenty of content to unlock, for those who can tolerate a mountain of cliches and a few annoying performance issues.