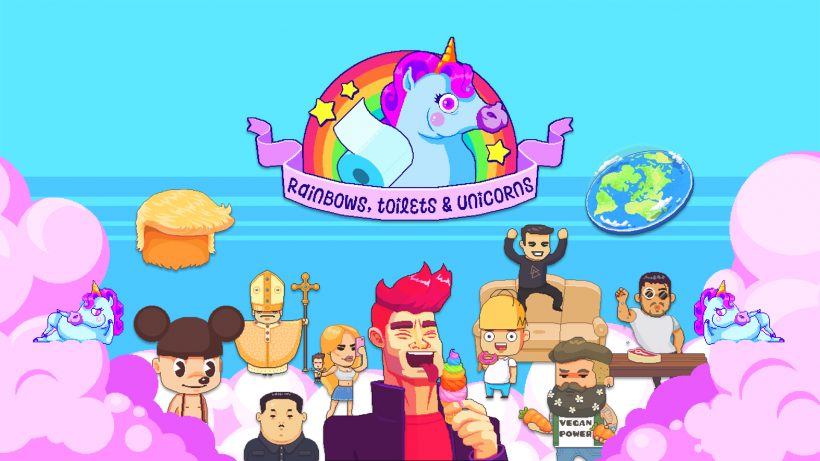 Imagine a day so hot that you’d do just about anything to cool off. Then, suddenly, you remember: ice cream! The perfect cure for a too-hot day. Your beloved ice cream truck pulls up, and on the menu is your favourite unicorn-rainbow ice cream! The monies simply can’t fly out of your pocket fast enough.

As you enjoy your treat, you feel a sweet cooling sensation flow down your oesophagus and into your tum-tum. Uh-oh, what’s this? Seems the sensation is going a bit lower and lower until… you realize you really need to poo! You make it to the toilet just in time. But that wasn’t ordinary ice cream; now you’ve been rocketed into the air, propelled by the force of the rainbow poo now exploding from your nethers.

And thus begins the bizarro journey into Rainbows, toilets & unicorns.

Rainbows, toilets & unicorns is a vertically scrolling shoot ‘em up that is fast-paced, colourful, and enchantingly musical. Your in-game avatar – the man with rainbow poo exploding so fast from his butt that it has propelled him into flight – starts near the bottom of the screen while waves of enemies fly down toward you in an attempt to unseat you from your porcelain throne.

Controls are simple: press (or hold) the A button to shoot, and use the joystick or D-pad to move your character around. You can also press B to use a wave attack, clearing the screen of any hazards, but only when that particular power is full. Here’s the twist: You must avoid enemies and the projectiles they shoot at you because one hit and you are done!

There are, of course, power-ups that can help you throughout your journey. Along the way, you’ll collect things such as a shield (allowing you to take one hit and not die), a magnet (which will attract the purple rupees to you), and a weapon that will give you more firepower. Unfortunately, these power-ups only last for a short amount of time before expiring.

Rainbows, toilets & unicorns is definitely challenging. Your character is somewhat large – thin, but long – which makes the hitbox large as well. When you fell an enemy, it will drop a rupee or two; collecting rupees is very much to your advantage, as it will fill up your Sparklebarf level. As your Sparklebarf metre levels up, so too will your firepower.

There are five intense levels comprised of five different stages. Each stage has a particular theme, and each boss fits the theme. To give you a fun example, the first level has our main character shooting down various religious figures. Minor enemies during the level include priests and buddhas, while the bosses consisted of the pope and a rabbi.

Unforgiving is one word used to describe Rainbows, toilets & unicorns. During each level, if you happen to die, you will find yourself at the very first stage of that level, completely stripped of any Sparklebarf levels and power-ups you’d acquired during that run. This frustrated me, but I’m not a hardcore player of this genre; I’m sure fans will certainly appreciate the challenge.

Rainbows, toilets & unicorns is affordable, fun, and colourful. What’s more, the game pokes fun at so many pop-culture references that I couldn’t help but chuckle. The music is amazing and honestly my favourite part of the game. I’d recommend it to any fans of the genre, or anyone looking for a way to relieve some stress.

Rainbows, toilets & unicorns is a fun, albeit challenging, shoot ’em up experience. If you enjoy toilet humour, destroying pop-culture icons, and the cuteness of unicorns, then this is the game for you!