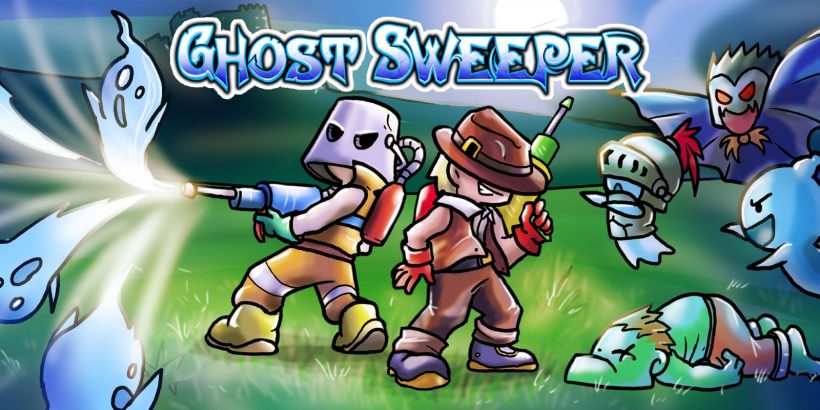 The main protagonist in this game has a tool that acts as a vacuum cleaner, rather than a broom. But I guess “Ghost Sucker” doesn’t have the same appeal as a game title. So here we are, with Ghost Sweeper, a puzzle adventure set within eight different themed worlds, in which your quest is to find the key, reach the exit, and perhaps dispose of some weird creatures in your path.

Unfortunately, the in-game backstory and instructions are written in such a manner that I can only assume the translation has been poorly localised. But the plot isn’t particularly complex: A Dark Lord has apparently resurrected from the ashes, returned to his castle, and cursed the land around him. This equates to a journey in which ghosts, pumpkins, skeletons, and other undead typifiers occupy the screen while you plot a path to the exit, finding treasure along the way. Four stars can be earned for each level: the first for reaching the exit, the second for collecting all the treasure along the way, and a third for succeeding within a certain time limit. The fourth star becomes available when you have earned the previous three stars on a level, and may require you to complete a specific task (such as clearing all the enemies).

This fourth star is evidently here to encourage repeated play. But these lands lack enough appeal to tempt a revisit. The ideas are in place, but it is the execution that fails. There are two playable characters to choose from with slightly different special abilities. They both have one key skill that is essential to completing a level: they can create or remove blocks, which can be used to jump on and reach previously out of reach ledges. This concept of crafting your own blocks has been used many times before (in games such as The Legend of Zelda: Breath of the Wild, Gris, and Trine) but here it is the key element to gameplay.

There are various puzzle elements at play in Ghost Sweeper, and the levels become more devious as you progress. Each enemy type has unique characteristics and weaknesses, and these need to be learned to avoid an early defeat (one hit from an enemy resets the level). Ghosts can be sucked up by your character’s vacuum cleaner (hmmm, I’m sure I’ve played a game with that premise before), and skeletons have a tendency to rise again and again, unless you remove a block from underneath their feet, in which case they fall and shatter.

Gameplay tweaks can be purchased using diamonds found while exploring. The in-game shop offers the usual staples: a shield, extra time, or clues to treasure locations, for example. There is graphical variety in the cute visuals, and the sprites have some retro appeal. One of the characters that you can choose to control has a bucket on his head, perhaps to muffle the noise of the rather repetitive and generic soundtrack that loops while you play (I soon muted it).

There are some spooky faults in this paranormal quest. Besides the in-game text that lacks a proof-read, there are design faults that really should be rectified. The map screen is sometimes illogical to navigate, and – most significantly – whenever the action is paused, the game resets any blocks that you have created on the screen. It’s not just the locals that are disturbing; the gameplay is suffering in Ghost Sweeper too.

Elements of other video games have been resurrected to craft Ghost Sweeper, but the result is lacking. The game offers some thought-provoking challenges for the committed adventurer, but – like its resident ghosts – it’s all a bit soulless.