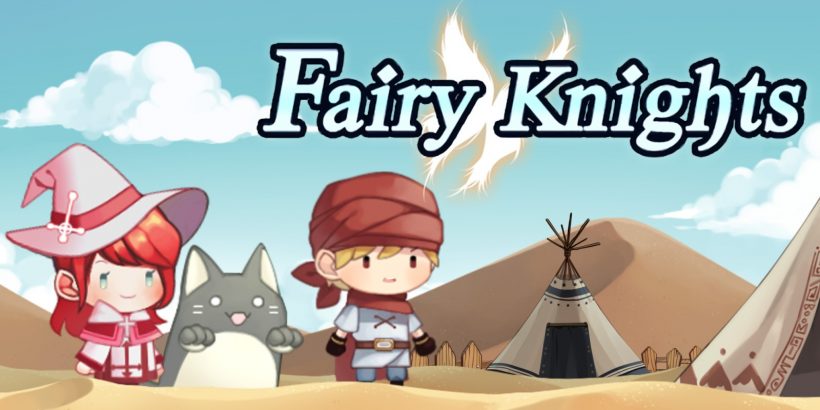 When playing a new Switch release that originated as a mobile game, I’m always skeptical about whether it’ll be able to justify its presence on a console. Fairy Knights caught my attention with its puzzle-based combat and cute chibi sprites, but it struggled and ultimately failed to keep that attention.

The story follows Kai, a young “Compiler” whose duty is to fulfil a magical rite, sealing restless monsters away and bringing rain back to the desert land. He’s joined by an adorable (and very tough) kitty named Digi, and a punchy Priest named Elisa, who has her own motives. Though these cute and expressive sprites might shock you with some tragic scenes and talk of defeating the Devil, the overall story is generic. Some English grammatical errors arise to distract you from the cliches being thrown around in dialogue.

Those tempted to skip scenes won’t have trouble figuring out how: the “SKIP” button is large, immovable, and centre-stage. Not only is it unsightly, but if you’re not using the comprehensive touch controls, you can accidentally skip all of the dialogue just by pressing “B”. There’s no warning first, and no way to replay the scene without reloading a save.

That is just one symptom of the sad reality that afflicts many mobile-to-console transfers. The next is a common one: lateral movement. Outside of the overhead map menu, your party moves horizontally in a barren world as they hit random encounters or talk to NPCs. Whether it’s a desert or a mysterious cave – there are no goodies to collect. Unremarkable character animations and repetitive music don’t help the cause.

Combat features a turn-based tile puzzle which is fairly self-explanatory: create a completed circuit with the lines, either making a loop or connecting the left and right sides of the board. Some tiles feature spell gems that will change the nature of your attack if you manage to include them. Touch controls shine here, but one huge frustration I encountered is the inability to move tiles counter-clockwise. You can turn on auto-battle, but the game is dull enough as it is, and characters will do minimal damage, so it’s neither enjoyable nor prudent.

As Kai gathers elemental mana stones on his quest, his magic abilities grow. After a few short levels, you’ll go from a dagger-wielding boy to spell-slinging warrior. This puzzle system grows bland extremely quickly, though, and I found myself wishing for curveballs: perhaps some negative status conditions, or enemies who can mess with your board.

The enemy designs are at least adorable and vary in style, with some of them really packing a punch if you aren’t prepared. You can upgrade and repair your equipment between levels at the shop, which also gets stocked with increasingly powerful items for purchase.

Although bland and un-engaging, Fairy Knights proves to be a decent passive distraction that’s accessible for players of all ages and skill levels. However, fellow mobile game Kingdom Rush Frontiers and cult classic PC puzzler The Room bear even lower price tags in the UK eShop, but feature significantly higher quality; it’s hard to look at heavy-hitting ports like these and comfortably say that Fairy Knights justifies its place on the Switch, at least at £8.99. If you really want to give this game a shot, it’s probably better to save your money and wait for a sale – or stick with the much cheaper mobile version.

While adventure RPG Fairy Knights puts a puzzler twist on the genre and features a cute art style, the uniqueness ends there. Little brainpower is necessary to overcome the combat, let alone drink in the bland environment and generic plot.