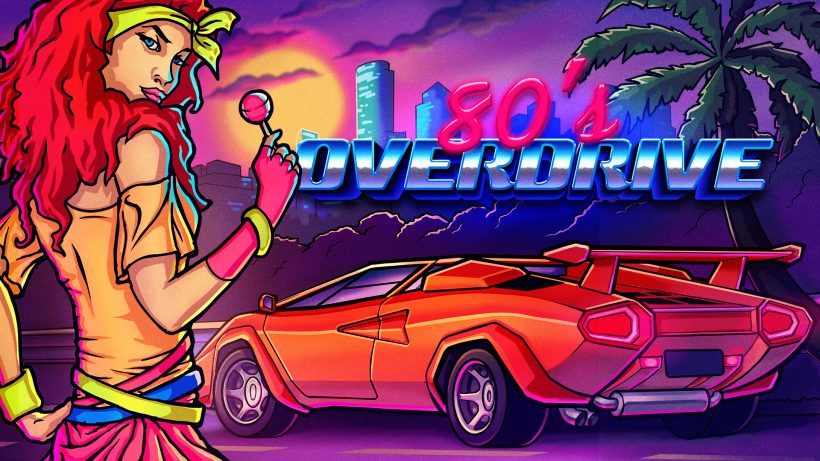 Back in good old 1986 – that’s where 80’s Overdrive wants to be. It wants to be Sega’s Out Run — one of the best received arcade racers of all time — and it’s going to use every neon light, every synthesised note to encourage you along for the ride.

80’s Overdrive looks to replicate the classic experience whilst changing just enough to stay relevant. But the core gameplay is every bit as familiar: steer your car — which is viewed in 3D, from behind — around the course, following the sweeping bends and avoiding other traffic. Different backdrops, locations, and a choice of vehicles all help to enliven the experience — a bit.

Two game modes are offered. In career mode, you’ll need to pick a track, pay the entrance fee, and hopefully win prize money finishing in the top three. If you finish first, you’ll typically unlock a new track. Any damage sustained in the race must be paid for, and upgrades can be purchased between races, including beefing up the engine or nitro for bursts of extra speed.

You’ll share the road not just with direct competitors, but an array of other, slower road users ranging from bubble cars to lorries. These other drivers are not about to get out of your way, either — in fact, their main purpose seems to be ramming you off the road. The police also turn up occasionally and are even worse drivers than all the civilians.

It’s a decent challenge, although the entrance fee combined with costly repair bills means you might well run out of money and will be forced to grind some of the earlier courses for vital funds. The tracks are also repetitive after a while and although there’s a reasonable number of different themes, there’s not a whole lot else going on to make any individual track stand out.

Time attack mode is very much like Out Run, the player tasked with racing against the clock, reaching each checkpoint for more time before it runs out altogether. There’s one significant difference, though, and that’s the ability to gain bonus time (1-3 seconds) by nearly hitting other cars. It’s a novel idea which inevitably ends in many collisions, but damage doesn’t occur in this mode.

The game is in very familiar territory graphics-wise, with sprites and backgrounds a subtle upgrade on Out Run standards. I was more a fan of the brighter levels (including a couple of almost trippy encounters!) but the sense of speed conveyed by fast-moving objects at the sides of the road is as effective as ever. The radio that can be used mid-race has a wonderful selection of music which accurately reflects the times whilst maintaining some variety.

It’s a shame that 80’s Overdrive doesn’t have much replayability, although the two modes have plenty of hours of playtime together. There are also frustrating minor issues that imply a lack of attention. For example, there’s no overhead map or any indication of how close rival cars are. This really detracts from career mode since you have no idea how close you are to the other cars during the race.

The choice of vehicles is pretty lacklustre and the final bonus track — without spoiling it — is disappointing. There’s also no multiplayer whatsoever. However, despite a lack of depth, 80’s Overdrive offers a lot of fun across its two modes and has one or two genuinely innovative additions.

80’s Overdrive gets enough of its core concept right to provide an enjoyable, highly playable racing experience. It’s unambitious, and the overall package is lacking in polish and reasons to keep playing. But there’s plenty of fun while it lasts.