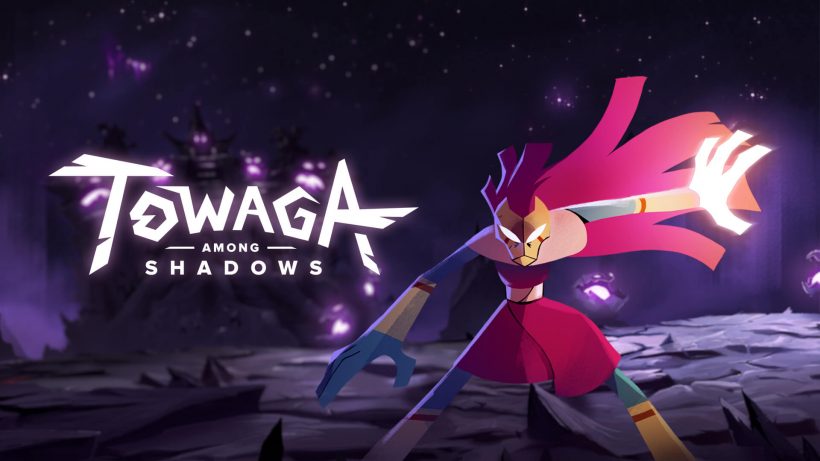 I’ve come across some odd game titles in my brief tenure as a Switch reviewer, but rare is it that I see one and have no clear indication of its genre or premise.

This predicament cropped up yet again with Towaga: Among Shadows. Exactly who is Towaga and why are they hiding among shadows? It’s annoying, really, because what’s here is a rather beautiful action-based indie that smartly blends select shoot-em-up traits with a horde mode – AKA something you shouldn’t keep in the shadows. And while it may have begun life on mobile, Towaga feels right at home here.

The first thing you’ll notice about Towaga: Among Shadows is just how jaw-droppingly gorgeous it is. It’s not uncommon for indie devs these days to impress from a visual standpoint, sure, but here it matters even more considering that much of the action takes place on a single screen. This is because the story centres on an ancient warrior fending off legions of enemies to defend his tribe. The art style definitely makes the most of that, using a clean 2D aesthetic that is slick, charming and vibrant. Think Guacamelee! meets Rayman Legends with just a dash more atmosphere.

There are 42 phases in total present in the campaign, with the goal of each being to defend a shrine against waves of hellish creatures. This you primarily do by shining a massive light beam in their face, rotating your right Joy-Con’s stick using full 360° movement to ensure that they never get the better of you. The kicker, however, is that in most of these levels you’re unable to move, which leads you to think more strategically about where to point your beam and when to best deploy the spell you have equipped.

Spells are a great way to prevent the gameplay from ever becoming too stale, especially since almost all are unlocked at a nice pace and provide a unique function. Wind Gust is the first you unlock and will shove enemies back within a certain a radius. Lava Slugs, meanwhile, sees you unleash a bullet burning explosion that will deal damage to foes over time. All can be upgraded and catered to your preferred play-style, as can the protagonist’s main attributes like health, light beam size and mana recovery time.

There are certain instances in the campaign where your character will shoot off into the sky to do battle, giving you full movement so that Towaga temporarily handles like a traditional shoot-em-up. If you thought this change would make things infinitely more interesting, you’d be wrong, as the only real difference between these and the traditional phases is that you can’t use spells and must instead rely on your own quick movement. It does do a lot for replayability, though, as both gameplay styles can be enjoyed separately to earn more souls needed for upgrading.

Unfortunately, Towaga relying so much on pinpoint accuracy and quick analogue stick movement does become a bit of a problem on Switch. Such fast movement isn’t something the Joy-Con were built for, and there were several times in stages where I found my grip slipping the longer the waves went on.

Outside of this, Towaga succeeds in making the most of its unique shoot-em-up hook where your feet remain cemented to the ground 80% of the time. It’s a simple idea backed up by a gorgeous aesthetic perfect for short bursts of play.

Towaga: Among Shadows is a unique genre mash-up that just about gets away with it due to its attractive 2D animation and inventive upgrade system. The Joy-Con analogue stick might not be designed for such quick-paced play, but in short bursts it works fine.