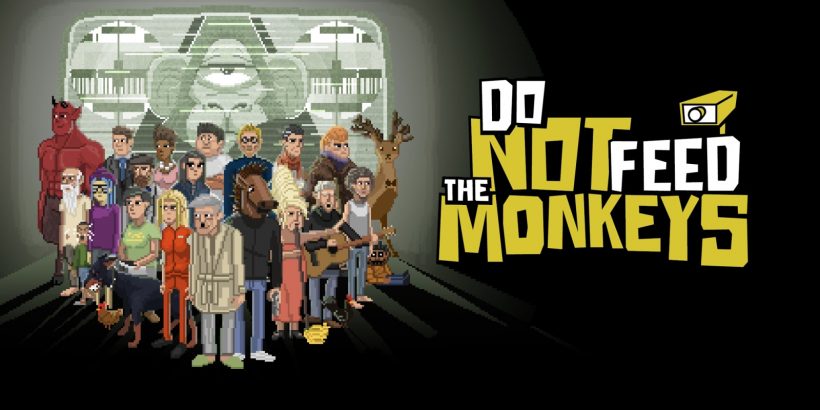 I’m a fan of people-watching, so Do Not Feed The Monkeys is one of my favorite recent PC conquests. Although the content hasn’t changed for the Switch, we’re faced with the usual issues that come with transitioning from a mouse-and-keyboard to console controls.

We’re introduced as a new member of the “Primate Observation Club.” Reading the agreement and seeing the creepy triangle logo, it sounds more like a cult – but we’ll let this slide. Evidently, the primates are humans, and the observer is you, hunched over a computer in a tiny studio apartment. Watching these people and scenarios over the in-game days is more addicting than it sounds; you’ll find yourself waiting up all night for something to happen in a particular “cage,” or camera.

Examples of people you’ll spy on include writers working under a tyrannical boss, an alcoholic insurance salesperson, and even… a fellow voyeur. It’s tempting to learn more about these expressive pixellated people – and so, that’s the name of the game.

Moving around the screen using a cursor or touch controls, you’ll be able to observe details about the different cages – and take notes on key words spoken by the subjects. All of these phrases will be written down in your notebook, where you can browse the internet to do research. Proper sleuthing can help you glean specifics like names, phone numbers, and addresses – details which can be helpful if you choose to break the rules and “feed the monkeys.”

However, your own needs cannot be ignored: you must balance sleep, hunger, and overall health while also paying rent. Shelling out to the landlady is tough when you’re also paying for food, and buying more and more observation cameras to meet the Club’s strict quota. There are two ways to make money: partake in the club’s Observation Studies by providing information about subjects, or getting a good old-fashioned job. The latter, like sleep, demands precious hours away from your computer – but affords interesting rewards, and different endings.

The struggle of meeting the Club’s demands, the curiosity about each cage’s subject(s) – it’s just as enthralling as in the PC version, with two exceptions. The first is the cursor. While you can turn the sluggish speed up in the Options menu, it’s an evident slowdown when you’re trying to keep track of multiple cameras at once. I found myself playing in handheld, switching between the touchscreen and the D-pad for this reason. The touch screen is a great addition, and while not perfectly accurate, it’s a fun alternative to using the Joy-Con.

The second and more glaring issue was a recurring game-breaking bug that would hold my cursor on a single security screen in the multi-vision window, shaking and glitching when I try to move it anywhere else, and disabling touch controls at times. This game only saves at the turn of each day cycle, so while restarting is a sure fix, it’ll inevitably cause you to lose some progress.

It’s no question that I’d recommend Do Not Feed The Monkeys – but would I recommend the Nintendo Switch port? Sure. It’s the same addicting game with many interesting endings to work towards. However, the cursor can be a bit of a drag, and the recurring bug is a huge turnoff. Perhaps with a fix, I’d feel more confident in saying this game deserves a spot on your Switch versus your Steam library.

Fans of people-watching and time-management will obsess over sleuthing out Do Not Feed The Monkeys’ many endings by spying, manipulating, and barely sleeping. Although playing on the Joy-Con feels sluggish, the touchscreen works well – except during an occasional game-breaking bug.