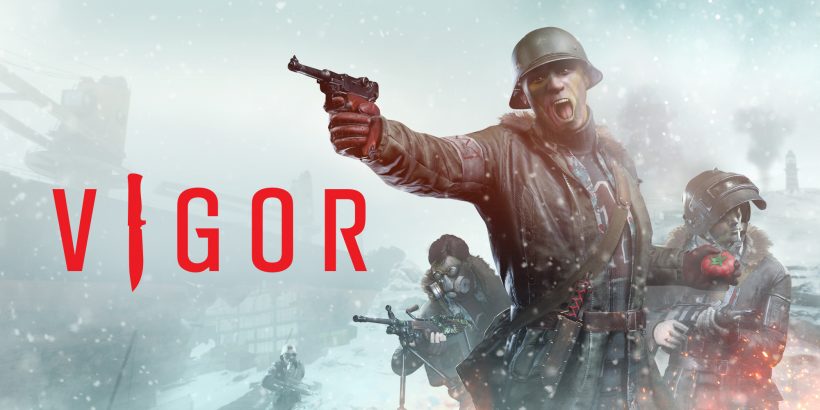 If Vigor and Fortnite were family members, Vigor would be the younger sibling aiming to step out from the shadows of the older golden child by being edgy and mature. In reality, Vigor would prove to be lacking in personality and fail to learn from its sibling, resulting in a rivalry that was over before it had even begun.

Unfortunately, analogies of family affairs aside, Vigor is a game that could well have been great, if not for some frustrating game mechanics that leave it teetering on the border between enjoyment and frustration. The premise almost had it destined for success from the outset, with post-war Norway offering the perfect backdrop for a mature loot ‘n’ shoot title.

As an Outlander, you are tasked with looting for materials and weapons out in the field which can be returned and used to build your shelter and improve your load out. The main mode, the one which allows you to earn XP and level up, is Encounter. Here, you loot resources and move towards a scheduled airdrop to be the first to grab it and get out of there, all whilst avoiding the radiation cloud that is sweeping the area.

Game modes in Vigor include Encounter, Featured Encounter, Shootout, and Elimination. The latter two provide a reprieve from the hard sell of the Battle Pass, with a level playing field ensuring it comes down to raw skill and strategy. That’s the idea, anyway. What actually occurs is an age-old case of ‘who has the best internet connection’ as you scramble to fire the most shots in the hope that one lands successfully and is actually acknowledged. To its credit, Vigor does have a good variety of game modes available, it’s just a shame that the execution isn’t as good as the design.

For one, the shallow shooting mechanics halt the fun that could be had here. If its visuals aren’t considered a throwback to a bygone era, the shooting will make sure that you are transported back a console iteration or two. Both feel underdeveloped and, whilst the clunky and cumbersome combat could be considered a design decision, the murky visuals are not. When careful planning and strategic execution are the order of the day, being unable to spot your enemies or read the terrain is a major drawback.

All of this is a huge shame. At its core, Vigor has the makings of a an excellent title, especially when it becomes free-to-play. The landscapes are beautifully designed and an atmosphere that has been crafted in spite of its shortcomings. I was tense throughout each match, feeling the weight of my every move and having to make decisions I know could end in upset. The way the sound has been used to heighten this further is excellent and is one of many examples I could give where Vigor’s potential is on display.

The main bulk of a player’s time will be spent on ‘encounters’, with XP and a Battle Pass being obvious influencers on its longevity and appeal. There is also in-game currency to be earned, and this needs to be carefully managed as you will need it to protect your equipment and weapons. If you die and you haven’t chosen to protect your loot beforehand, you will lose everything in your possession. In a similar vein to that of the free-to-play market at present, that can result in an uneven playing field…In Vigor’s case, that is, and likely always will be, a metaphor to describe the battles ahead.

Vigor fails to capitalise on a gap in a dominated free-to-play market for a mature take on a shooter. It has all the makings, but it lacks the style, grace and polish of the competition. Close, but no cigar.