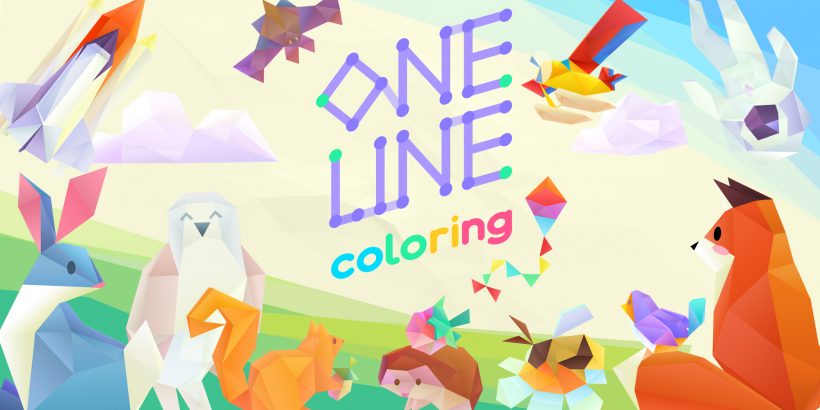 2020 has been a bit of a rough year to say the least, and so sometimes you just want a game that’s a little bit more relaxing, laid-back and simpler. To help us get through these uncertain times, developer MythicOwl have released another console-exclusive puzzler called One Line Coloring. In what’s ostensibly a series of dot-to-dot challenges, you’ll be doing some colouring, and you’ll have to do it in one line.

It’s nothing too mind-blowing or boggling, but as with their previous games, One Line Coloring suits the Switch hardware well and utilises the mobile-esque form factor of the touchscreen in handheld mode.

Presented with over 100 different puzzles across six different locales – A garden area, a forest area, a beach, a space area, an underwater area and a campsite – One Line Coloring has you drawing and bringing to life the typical creatures, items and objects that inhabit those typical scenes.

In the campsite, for instance, you’ll create the campfire, trees and tent, or in the underwater section, you’ll animate an octopus and a shark into the growing 3D picture. What I would liken it to would be the moving 3DS images from the Puzzle Swap section of StreetPass, if you can remember that. I can imagine it to be quite satisfying for young children to build up their garden or forest scene with little items and objects, and seeing your progress physically represented in a celebratory diorama full of trophies is quite a good way of rewarding players, rather than just moving them onto the next stage.

To add a little bit more challenge into the mix, many levels feature lines with arrows pointing in a certain direction, that can only be passed through one way. It’s a subtle change from the traditional formula of putting a pencil to paper, but it can throw a spanner in the works when you feel like you’re on a roll, revealing a puzzle mechanic that forces you to think twice and plan your routes in advance.

Of course, with the more intricate objects that have more edges and lines, the possible paths will become narrower, but not to worry, you can always rewind and start over at the push of a button. This isn’t the sort of title that wants to frustrate you in any way – that’s not really the point – and you’ll often overcome a puzzle you’re momentarily stuck on before losing patience. For those wanting to squeeze some more replayability out of the game, each puzzle does feature a timer, but there isn’t much incentive to this; ultimately you’d have more fun just going back through the levels again.

Overall, One Line Coloring is a well-presented, relaxing little puzzler, filling another mobile slot in the eShop library by utilising the sometimes overlooked capacitive touchscreen. For the price, it’s hard to criticise something that does exactly what it sets out to achieve. It’s always nice to have a game that fully makes the most of the Switch, and the calming puzzles are a nice palette cleanser and change of pace in these trying times.

Even with over 100 puzzles it’s a short experience, and it won’t really offer up much challenge for the average adult player, but it could be a nice one to pick up for kids that enjoy playing in handheld mode or on their Switch Lite. Either that, or any hard-working adult who wants a short break from the chaos, too long deprived of some good old-fashioned dot-to-dot!

Connect the dots and you’ll find that One Line Coloring is an extremely simplistic puzzler. However, it’s hard to criticise a game that does exactly what it promises in a well-presented and pleasant package, that uses the Switch’s touch-screen functionality well.