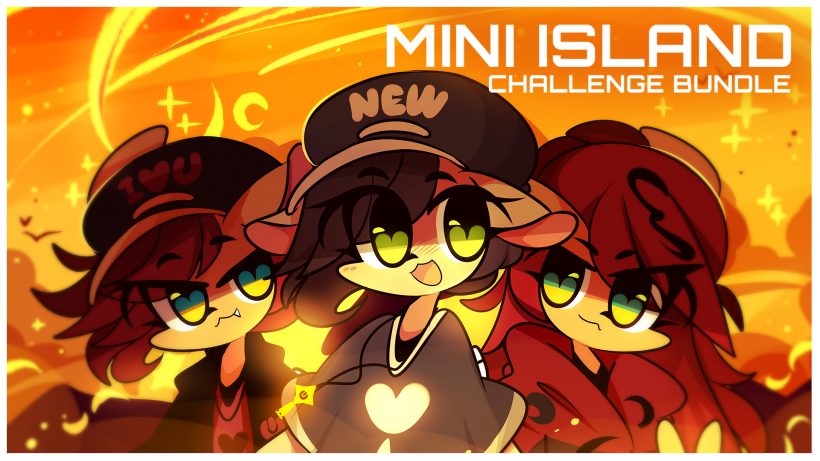 Mini Island Challenge Bundle is a 2D-arcade-action boss-rush game. Travelling exclusively to the right, each new screen you enter will have you fighting a boss; defeating the boss will result in powerup drops to upgrade your stats.

The game boasts four different islands, all of which are accessible as soon as you boot up the game. Choose your favourite anthropomorphic-anime-girl (say that three times fast), and start running and gunning.

The controls make the game very easy to pick up: left and right to move (I found the D-pad much easier than the joycon). Use A to attack (shooting a never-ending stream of bullets), and B to dodge. The X and Y buttons are your special ability and grenades respectively, and the use of these abilities will grant you three seconds of invincibility.

Each character has a different special ability, for example, a shotgun blast. Every time you enter a new island you will be able to run past the controls-billboard, just in case you need a refresher, making it one of those games that is easy to put down and then pick up again months later.

The visuals of the game look really slick and sharp. However, I wish the game had more life. All of the levels look similar. In fact, besides having different names, I couldn’t really tell the difference. The colour palettes are all relatively samey, and when I’m in the middle of an intense battle, I’m not paying much attention to the slight nuances of the background trees.

The character models are all so small that I’m not exactly sure what kind of animal they are anthropomorphising: mice? Their ears look mouse-like on the featured image, but my favourite character had orange ears and what looked like a fox tail…

The bosses suffer from the same issue as the character sprites: tiny! The battles start as soon as the boss is close, and there is no time to appreciate them. The range of your gun spans the entire map, so you don’t have to be anywhere near a boss in order to do damage.

Also, I have no idea why I’m fighting these intense battles. Sure, I will collect a “badge” at the end, but does this relentless slaughter have any meaning?

There will be times when you will be granted a brief respite from demolishing bosses, and your character will run through a unique area filled with what look like vending machines, shops, and a bunch of other little character sprites. However, you can’t interact with any of them, or even buy a drink/powerup from a vending machine. It’s a nice display of graphic art, but it seems a bit pointless.

All of this made the game difficult to truly appreciate. It could easily have been tiny boxes spitting bullets at other boxes on a dark background and provide the same gameplay experience.

The music is stellar; in fact it was my favourite part of the game. It has that ambient, Mirror’s Edge, feel. The kind of music you just want to have on in the background while you read a book on a rainy day in a coffee shop, ya know?

All in all, if you are a fan of boss-rush games, and want something that’s easy to pick-up-and-play, then you should get some enjoyment out of Mini Island Challenge Bundle; however, it isn’t going to blow your mind by any means.

Mini Island Challenge Bundle features intense boss-rush gameplay. With four different island-levels to choose from, as well as four difficulty levels – from Normal to Hardcore – fans of the genre will get some enjoyment out of the game. The price is definitely right, and the soundtrack alone is worth it.