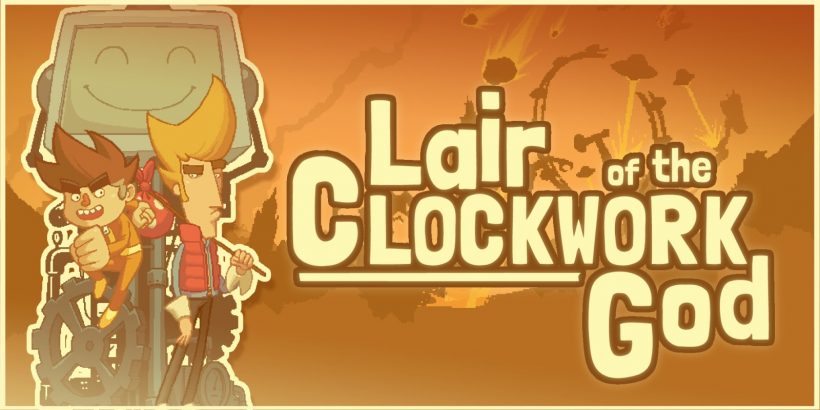 How often do you turn on your Switch to have a giggle; to find something that will make you laugh? We might often turn to television or a book to find some humour, but there are probably few occasions where we expect a video game to create some giggles. A game can perhaps be unintentionally funny (i.e. when a serious action game might provide a dodgy glitch to raise a chuckle), but often a game that tries to be funny, simply… isn’t. Comedy is an art form; it cannot be forced, and we do not all find the same things humorous.

Lair of the Clockwork God, however, achieves the rare accolade of being a genuinely funny video game. The script is brimming with dry humour, much of which a fan of video games will truly appreciate. The two main characters under your control in this adventure – Ben and Dan – are both firmly entrenched in their own beliefs of what genre of game they want to feature in. Tall and slim Ben wants to be in a point ‘n’ click adventure, and his skill set is limited to walking slowly and interacting with objects via on-screen word prompts (Look At, Talk To, Examine). Spritely Dan on the other hand is a keen platform hero, and acts as your more agile avatar. Between them, your aim is to proceed through the rather surreal situation that they find themselves in.

The game begins in Peru, from which Ben and Dan head on an unusually dangerous (and comical) adventure. The L trigger switches instantly between each character, and the opening chapter can prove quite slow once you realise that Ben is so anti-platforming that he refuses to have a Jump button. As such, the early puzzles involve Dan racing on ahead to ensure a level playing field for Ben to navigate, using levers, pads, and movable blocks. So far, so formulaic; and if it wasn’t for the witty dialogue you may be tempted to give up on the expedition. The jury is out on whether a game can get away with offering lazy obstacles if it uses self-effacing humour to justify those obstacles, but the good news is that things get more interesting throughout the 21 chapters of the game.

The adventure takes Dan and Ben through a jungle, war-torn London, an unusually spacious shed, and beyond. Part of the joy of the game comes from the rich variety in subsequent areas; the scenery is visually diverse and certainly surreal (“None of this makes sense you know” says Ben on more than one occasion). The platforming sections gradually become more hazardous and the puzzles more devious. Early in the game, Dan must find a toilet for Ben to unload his bladder, and the solution is found through jumping through inter-dimensional rifts to switch Dan on to his Y-axis. It’s a moment of thinking laterally – literally – to locate a lavatory, and just one example of the bizarre concepts at play.

The game works best when the characters are side-by-side, although they often have to work apart. Progress can plod at times, but an experienced point ‘n’ click adventurer may have more patience for the structure of some of the puzzles. Lair of the Clockwork God has two great strengths: a strong and hilarious script, and a wealth of accessibility options, including a dyslexic-friendly font and an option to remove puzzles that may hinder a colour-blind player. Overall, it’s a welcome trip into the comedic unknown.

Lair of the Clockwork God is a joyously nonsensical adventure filled with sharp wit and an eclectic mix of challenges. As a merging of two genres (platformer and point ‘n’ click adventure), it mostly succeeds. Are you game for a laugh?