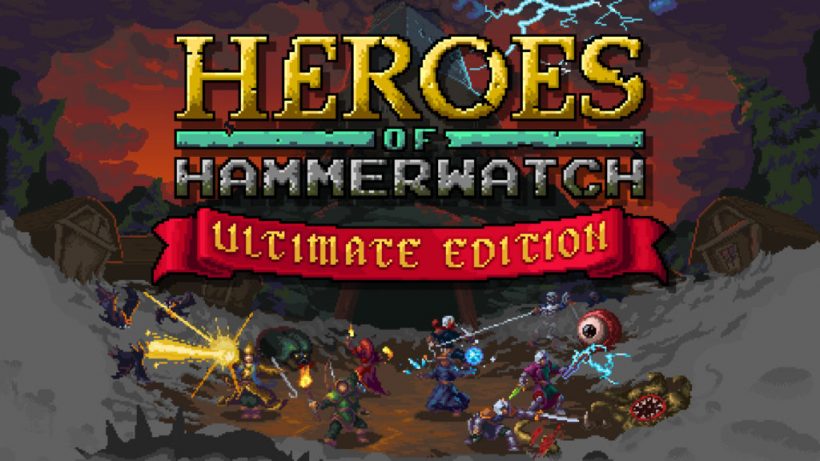 “If it ain’t broke, don’t fix it” – the underachievers’ manifesto. There’s nothing worse than settling for average, so I was ecstatic to see that, although there was nothing fundamentally wrong with Crackshell’s maiden game Hammerwatch, they strived to do better – to refine their model, deliver a truly fantastic experience, and – most importantly – give it a catchier title. Heroes of Hammerwatch is everything its predecessor wanted to be: through procedural generation, improved stat mechanics, a consistent supply of DLC, great multiplayer, and a delicious pixel presentation, Heroes of Hammerwatch: Ultimate Edition – as it’s known on Switch – is the definitive experience of the game and one of the finest in its genre.

Much like its predecessor, at its core, HoH is a dungeon-crawler, this time tied up nicely in a rogue-lite package. The majority of your time will be spent heading up ‘The Forsaken Tower,’ where you’ll encounter hundreds of different enemies ranging from creepy crawly giant maggots to skeleton warriors to vampiric lords, as well as plenty of challenging boss battles.

There are four familiar base character classes at your disposal, each with their own skills and abilities. You’ve got your close-range paladin, your long-range archer, your sorcerer for mob control, and your friendly neighbourhood warlock specialising in healing abilities. There’s also a special fifth Witchunter class made available through a DLC included in this edition that acts as a bit of a strategist, rocking a wicked-fast crossbow and plethora of situational fire attacks that had me feeling like Van-badass-Helsing. Though I dabbled with others, this quickly became a firm favourite for me, finding him especially durable for solo play, where, without the support of your cross-functional suicide squad, you need to be a one-stop-shop of strategic destruction. However, I’m pleased to report there’s a robust online matchmaking mode that has an active community of players, so you’ll never be hard-pressed to find a team if you want one.

Movement and combat is a simple but highly satisfying twin-stick affair, utilising shoulder buttons for primary and secondary attacks. It all works fine on the Switch’s joy-con controllers, but – as I’ve learned by now on the Switch – anything requiring constant use of the thumbsticks becomes a slippery pain, and so I recommend, if you can, playing this bad boy up on the big screen with a Pro controller; you won’t regret it. Combat is fierce and fast, and there’s a top-notch effort to make every character feel unique. Each class has a completely different set of skills with glorious combat animations, ensuring the player always feels like a hurricane of mayhem. My old pal the Witchunter, for example, can launch flaming dogs down corridors, which will bounce and bark until they explode. Or, if he’s attacked, he will unleash a flurry of crows that dive ruthlessly towards his enemies, cawing like tiny feathered psychopaths.

Dungeon design is procedural but never feels random, consisting primarily of narrow corridors and open rooms filled with terrifying hordes of enemies. Each biome has a unique aesthetic and a suitably kick-ass soundtrack to compliment it. Seriously, expect these earworms to be stuck in your head for hours. Through exploration, you’ll find countless secrets, hidden switches, false walls, and trap rooms that demand a hefty demonstration of dexterity but reward handsomely in return. HoH is hard as nails though, so it’s up to you if you want to risk dodging arrows like raindrops for the sake of a decent bit of loot. I mean, the answer’s always yes, right? Shiny stuff!

Like all the best rogue-lites, success in HoH is gradual. Your primary goal, aside from progressing through The Forsaken Tower, is to level up and upgrade your character so that they’re better equipped to reach greater heights in each subsequent run, which is again where the game shines. Within the tower, you’ll come across ores, which once collected can be lowered down a pulley system to be sent back to your base of operations: an initially dilapidated mountain town called Outlook. These ores can then be used to upgrade key buildings, restore the town to its former glory, bring prosperity to the populace, unlock new characters, customise your runs with buffs or restrictions, and most importantly, allow you to upgrade gear and skills to get totally hench. Finally, in a stroke of subtle but genius design, you can create multiple characters within one town, sharing resources and working on building improvements together, so switching out characters to try new playstyles never feels a step back; you’re always pushing forward.

In addition to the Witchunter class, The Ultimate Edition comes with two other DLCs – “Pyramid of Prophecy” and “Moon Temple” – introducing a brand-new campaign, permadeath ‘Mercenary Mode,’ and dozens of other superb little touches that demonstrate the developer’s desire to create one heroic package for Switch players to enjoy. If that’s not enough, a ‘New Game +’ mode means potentially endless replayability, so let me hammer this home: if you enjoy rogue-lites, twin-stick shooters, or frankly anything remotely RPG-related, you want this in your collection. Trust me, heroes.

Heroes of Hammerwatch is the definitive edition of an already fantastic game. It’s a killer rogue-lite, a great twin-stick shooter, and it comes packed with additional content for a very modest price point. There’s just no reason not to own this.