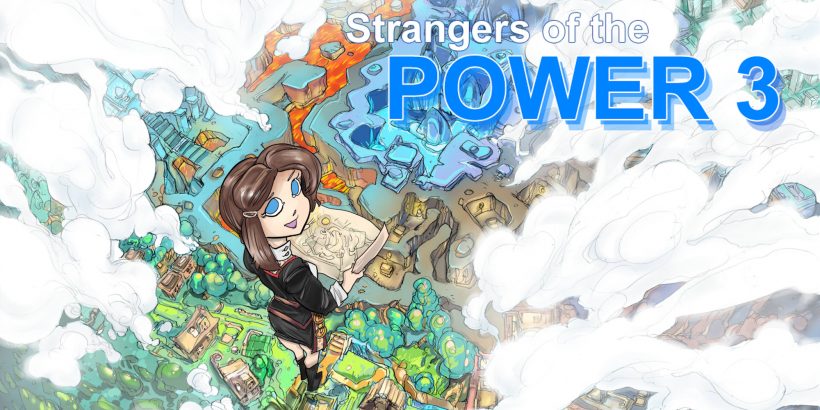 If nothing else, Strangers of the Power 3 is straight to the point: a short story, simple gameplay, and memorable – if shameless – characters. The most normal one of the bunch is our fresh-faced hero, Marion, who inexplicably gets saddled with the task of defeating a great evil by harnessing the power of the elements.

One of the first things you’ll notice about this game (aside from the poor grammar) is that using the camera to your advantage will be vital. Panning and zooming around dungeons and towns reveals hidden treasures or routes. It’s easy to get a little discombobulated, but this feature does make for some unique – if vanilla – dungeon crawling. It would make for some interesting exploration too, if there was more motivation to do so.

Cute pixel art from the previous titles in the series has been traded in for polygons – and while this can work, here it does not. The avatars’ textures look fuzzy up close, for starters. Towns feel near-abandoned, as most of the details are window dressing. That means there is less incentive to look for hidden items (which are there, if you don’t mind trying to interact with a dozen useless items and buildings first).

One upside is the hand-painted character portrait art, which is a distinct and bold style – but it’s a short reprieve. The overworld map does have that retro charm it seems to be going for, and while the 3D rotation doesn’t add much here, those washed-out looking avatars aren’t so jarring from a distance as they are up-close in combat. Meantime, the music consists of blessedly inoffensive orchestral tunes to smooth out a not-so-pretty game.

Enemies appear in random encounters, and while the graphics and animations here majorly disappoint, the challenge level does not; once you have a full and well-equipped party, taking bosses down is a decent challenge. Combat entails the usual choices of fighting, guarding, running, or utilising items and skills. There is not a multitude of choices to bog you down – and in this, the game’s stripped-down simplicity could be considered a plus. However, players who seek deep combat with party customisability will be disappointed.

It would be a great starter adventure for kids, if not for the extremely mature dialogue – and the perverted tree. Indeed, do not let the little ones get ahold of this innocent-looking game. The foul language can be a bit uncalled-for at times. In general, the conversations take drastic turns with little character setup. (The fact that the world’s fate is left to a novice healer should be proof enough.)

Successfully bringing a retro-style JRPG into the world of 3D is a feat on its own. This does make Strangers of the Power 3 stick out among the competition, as well as its predecessors; other than that, though, it leaves a lot to be desired. If it’s not a good game to play for plot, and it’s a visual letdown, who should be looking at picking this one up? For the full price, I’d say – just fans of the series. On sale, perhaps some hardcore RPG junkies would enjoy a quick romp in a new world.

While its camera movement and character portraits make an immediate impression, Strangers of the Power 3 has little to offer its mature audience. Gameplay is simple, visuals are stripped down, and there is no incentive to give it another go.