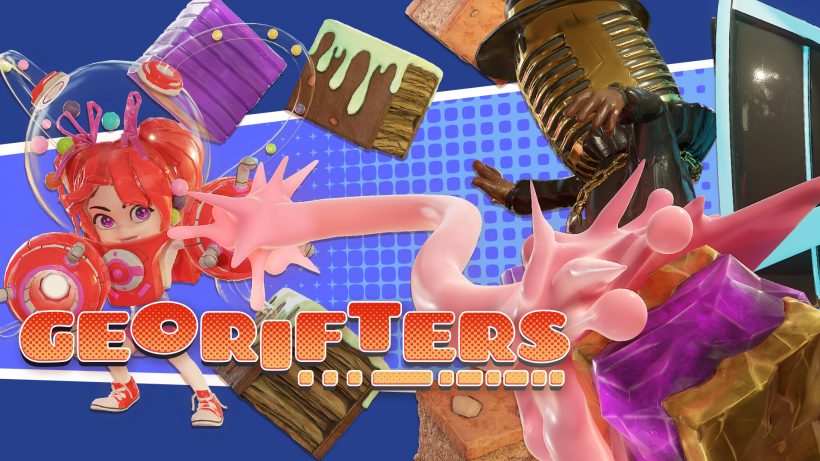 Willy Wonka would feel at home in this world of sweets and goo. Georifters is a 2D puzzle platform game competing with many other examples of the genre on the Switch, including some absolute classics such as Celeste, Inside and Limbo. It needs something special to stand out from the crowd.

To progress from one stage to the next, you must collect crystals to open a portal. Crystals are found behind blocks that need to be manipulated to reach them, and each playable character has their own unique secondary abilities to manipulate the blocks. Candy can move whole rows of blocks with her bubblegum, while Dr Schnoz can separate blocks vertically to reveal space for you to squeeze into and grab those shiny rewards. Points are rewarded according to your performance, which can then be invested in unlockable perks for your character, tweaking their stats to your preference.

Brown blocks are easily moved as long as there is space above, beneath or to the sides of them. Red blocks are deadly goo pits which will lose you a life if you fall into them, sending you back to the start of the stage. Spiked blocks are to be avoided as they will sap your energy, again sending you back to the start of the stage if you hit them one too many times. The game continues in this vein, and despite meeting new characters along the way, everything feels repetitive. Once you’ve seen one block and worked out how and where to move it to, the game quickly loses its appeal.

Georifters is hampered by a power bar system whereby three pushes of a block causes your battery to flash and deplete. Despite it only taking a few seconds to recharge, this mechanism slows the game down unnecessarily and breaks your flow. Fortunately, the campaign can be played with a friend co-operatively, which raises the entertainment a little.

There is also a local multiplayer Battleground mode for up to four players that offers more enjoyment than the repetitive campaign mode. Each player battles it out to collect as many crystals as possible. In this mode, bombs and other weapons make for a more appealing side of the game as you attempt to reach the crystals first. Customisation options allow you to tweak the number of rounds and the amount of health for the participants.

It’s a simple concept in essence: move blocks, find space and retrieve the crystals. The puzzles are well thought out, although experienced players will not have too much trouble solving them. The controls are easy to pick up, with L activating the character’s special skill, R pushing blocks back, forward, up and down, and B providing a jump ability. Graphics are brightly coloured, but there is a grainy feel to the look of the game. The visuals might catch the eye of a younger gamer, although it feels a little laboured and undercooked. The music is catchy without being groundbreaking.

Georifters is a decent concept that just falls short. The early levels are sweet enough, but the puzzles are generally too easy and it soon become repetitive. You can get away with collecting just one crystal to escape each stage and all too quickly the fun has dissipated. There are a few hours of playability if you get friends around but even then, this is not enough of an offering to warrant the cost price. Georifters is not perhaps the sweet treat you are looking for.

Georifters has some good puzzle ideas at its core but becomes repetitive too soon. Multiplayer offers more entertainment, but the price is too high to make this title worthy of your time. This sweet snack lacks bite.