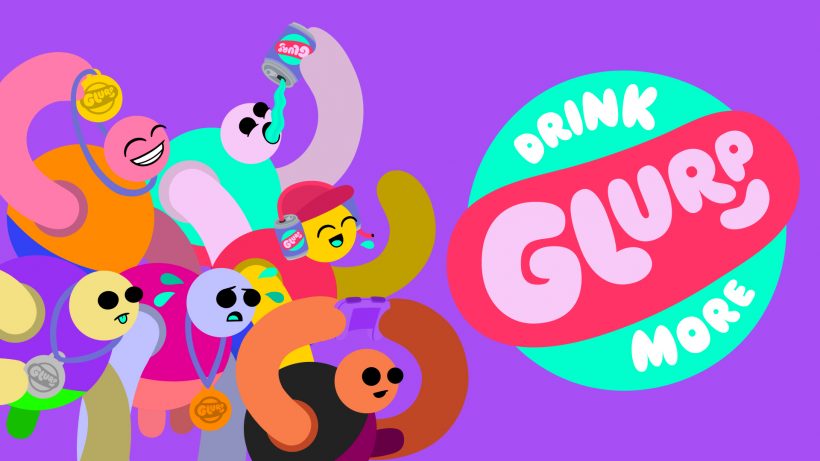 Because it’s so incredibly easy to break off a single Joy-Con and pass it around, the Nintendo Switch is still our preferred choice for any friendship group seeking a fun multiplayer fix. Drink More Glurp is a vibrant, satirical party game hoping to take advantage of this, allowing groups of 20+ players to compete in several fiendish physics-based sports challenges set against the backdrop of a make-believe Olympics. This genre mishmash should be a lot of fun, but the lack of varied game modes and underdeveloped single-player portion means it never quite takes home the gold.

Drink More Glurp might squarely position itself as a party game, but most players will likely get to grips with its unique control set-up in the single-player mode. Simply called Challenges, it’s here where you learn that handling your flailing blob character revolves around three basic principles: rotating the analogue sticks in tandem to swing your arms and run, slamming them down again to jump, and using the ZL and ZR triggers to grab. It’s very reminiscent of 2014’s Octodad in that they’re made purposefully awkward, seemingly laying the foundation for you and others to clumsily participate in events and have hilarity ensue.

The problem, however, is that solo players will lose interest in the Challenges playlist extremely quickly, especially as most of the later events are simply remixed versions of ones you’ve already played. Take getting from one side of the screen to the other. At first the plane you must run along is relatively basic, as you’d expect, with you trying to secure the best time as you learn how to move your character. Eventually, though, later challenges have you doing this across low/high platforms or attached to a floaty balloon – then sometimes you must account for additional gameplay-altering Glurp sponsors. It all ends up being a bit too overwhelming.

What are sponsor combinations? Well, in theory they’re a way to enhance Drink More Glurp’s replayablity, providing a unique spin on established events by, say, giving you laser arms that let you boost up high or intermittently changing gravity. All this would be fine were you not still trying to get your head around the game’s basic movement controls, which are intentionally designed so that they never quite click. This is an issue in a competitive experience where you’re urged to chase down high scores and low finish times as it’s almost impossible to do this consistently with so many randomised factors baked in, meaning luck plays a huge role.

This sheer unpredictability does fair slightly better when you play Drink More Glurp with friends, where your goal is to beat each other and not a specific target. There are three difficulty types you can choose from that’ll affect the flow of tournaments, with a great deal of customisation in terms of how many players and rounds you can have. Unfortunately, even then, passing a Joy-Con to someone who hasn’t had single-player practice feels unfair. I’d always recommend letting folks have a mess around first.

As far as quirky party games go, Drink More Glurp is the perfect example of a setup that is good in theory but problematic in practice. The energetic art design and quirky universe building is solid; it’s just a shame that the core gameplay’s unpredictability – while good for some laughs – loses all credence in the competitive realm. Add in the limited number of event types and Drink More Glurp buckles before it can even take off.

There’s the essence of a fun party game in Drink More Glurp , one that’s unfortunately let down by its own level of sheer randomness and unpredictability. It can be hilarious in a group, but competing in events is rarely fulfilling.