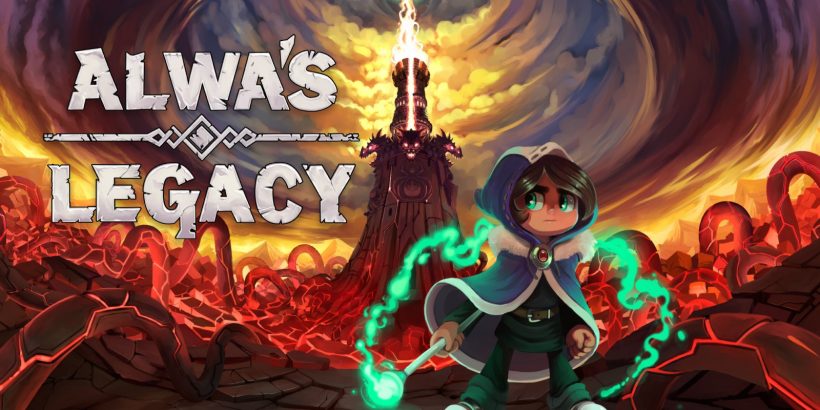 Sometimes a title just has to find its home, doesn’t it? Developer Elden Pixels reported that Alwa’s Legacy sold more copies on the Nintendo eShop in one week than it did in four months on Steam. That’s pretty staggering, exemplifying once again the power of the hybrid console’s eShop marketplace for indies. It’s even more encouraging to see the Nintendo fanbase being the one to recognise this cracking title for what it is.

Alwa’s Legacy is a sequel – of sorts – to Alwa’s Awakening. Though based on the same characters, in the same world, the games are stand-alone experiences that can be enjoyed separately which, considering the relative obscurity of the franchise, is probably for the best. We begin with our heroine – Zoe – a young girl clad in purple robes who wakes on the riverbank of Alwa with no memory of who she is or how she got there. A tussle with the franchise’s returning villain – a wizard known as Vicar – begins, and ultimately results in Zoe’s quest to locate magical artefacts in Alwa to restore her memory, destroying some nasty demon beasties along the way.

It’s not a story to write home about, and that’s absolutely fine; Alwa’s Legacy is good at so many other things that being bogged down in heaps of narrative really would just get in the way of the excellent exploration, platforming, and puzzle-solving that permeates the experience. As with any good Metroidvania, world accessibility is initially limited, and you’ll need to find and unlock various powers to explore further. Early examples include the ability to spawn green blocks to stand on, floating bubbles that can be ridden on for a short period of time, and a lightning spell for burning wooden barriers, or – you know – killing stuff. These three tricks are your bread and butter, and each one is upgradeable using blue orbs found throughout Alwa, resulting in some really creative and clever spell combinations to open up secrets. On top of these, you’ll unlock a bunch of other, more situational skills – such as the ability to walk on spikes – that are useful at very specific points in the game.

Aside from a well-implemented map, there’s very little hand-holding throughout, which will please or frustrate you depending on how naturally the next logical step comes to you. I found most of the game very intuitive but did at one point become stuck for well over an hour. There is an NPC who gives you hints, but he just told me I needed a lot more stuff before I could progress – cheers for that, mate. Enemies respawn every time you move from one screen to another, so needing to continuously traverse Alwa to find something can become a bit of a chore, occasionally made more unenjoyable by some clunky and unresponsive melee combat. Fortunately, there are 45 save points across Alwa, and in a rather nice strategic twist, each one can be turned into a warp point by spending a rare collectable currency called ‘tears’, which will save you a lot of hiking time.

The exploration of Alwa is punctuated with dungeons that will tickle your Zelda-lovin’ pickle, each one focusing on a specific mechanic, like gravity inversion or – dare I say it – water manipulation, which is thankfully nowhere near as frustrating as the water dungeons of old. Although these areas are definitely challenging, they’re head-scratchers rather than head-pounders, and you’ll soon make your way through to each dungeon’s boss. They served as a slight anti-climax for me due to simplicity, but were still enjoyable enough and looked cool as hell.

Speaking of looking cool, how about those screenshots, eh? A gorgeous 16-bit colour palette brings stunning beauty to the land of Alwa that feels both faithful to its retro-inspired roots but artistically unrestricted by those conventions. From the opening frame with its rolling hills and fir tree backdrops, to the temple ruins, riddled with overgrown flora and crumbling brick, every single screen in Alwa’s Legacy is a work of art. Character sprites are superb, making each encounter feel unique and fresh, and the whole affair is tied off with a simply fabulous soundtrack from RushJet1, whose catchy 8-bit numbers will trigger incredible nostalgia trips.

Alwa’s Legacy is by no means an easy game. There’s a lot of precision platforming, tricky enemies, and some devilishly fiendish puzzles. For those that do struggle, there are accessibility options available; you can set it so that after death you respawn on the spot rather than back at the last save point, and you can also change your map so that it tracks item locations. These design options hurt no-one and are exactly the kind of thing I like to see in games today.

For those that played Alwa’s Awakening or those that enjoy Metrodvanias in general, this isn’t a hard sell. It’s bigger and more beautiful than its predecessor and it’s clear that the developer’s put a huge amount of love into creating something that shines in almost every way. Keep an eye on Elden Pixels; I suspect this may be the start of a legacy of their own.

Alwa’s Legacy is a sequel done right. It improves on its formula in every conceivable way. There are a couple of frustrations in terms of combat and guidance, but overall this is a stellar Metroidvania from a dedicated and passionate developer.