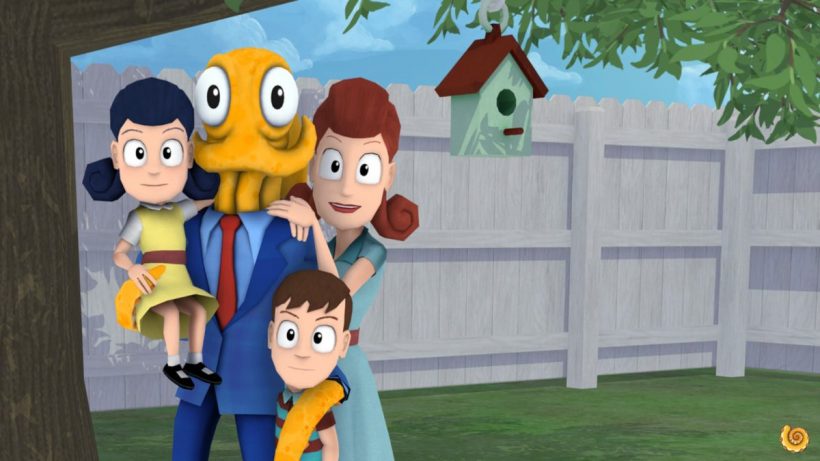 AKA, knocking things over acsquidentally.

Octodad: Dadliest Catch is by no means a new title, having appeared previously on the Wii U eShop and on Windows before that. But we’re never one to criticise extra titles coming to the Switch library.

The game has you follow a short story about an octopus who’s found his way into a normal human life and making human kids, somehow. The threat is offered by a chef who appears to be the only person who recognises that Octodad is not a human, and aims to have our protagonist available on the fish counter at the local supermarket. It’s a jolly fun plot, helped along by some neat and clean visuals – though, given the game’s age, it wouldn’t have been tough for the Wii to power.

The issue though is that the movement system, which is really supposed to be the game’s unique selling point, is just so clunky and obtuse. I get what they were trying to do – you move each standing limb individually by using the left and right triggers and then move one of Octodad’s remaining eight arms to grab and throw items. Comedy is great throughout, and you can tell this clumsiness is meant to be a part of it. While walking, you need to use the left stick to circle each leg around each other, which leads to you getting accidentally caught on inanimate objects as you try to walk a straight line. The opening level has him walking down the aisle to take his bride, and it’s near impossible to do this without demolishing all of the decorations on the way. You and a friend taking a limb each for co-op makes things even tougher!

Throwing controls are rubbish – you’ll rarely if ever manage to get things sailing in the direction that you want them to, and there are particular points in the game where accuracy is of utmost importance. It’s particularly relevant in sections where you have to pick items up and move them towards Octodad’s body in order for him to wear them – you’ll find him just waving the clothes around in the air like some kind of madman while you sit there wondering what on earth you’re doing wrong.

I get that this is perhaps the game’s charm – yes, the tasks you need to do range from the trivial to the mundane, from mowing a lawn to making coffee, but the fact that Octodad is an octopus (shock horror), things are always going to be more difficult for him. But that nice little idea doesn’t fully translate to a fun game for the player – frustration sets in rather fast when you’re picking up the wrong items, knocking things over that you didn’t mean to and simply walking in the wrong direction due to the clunky movement controls.

If you’ve already played this on Wii U you’ll know what’s to come, and there won’t be the laughs to the extent there’d be if you’re a newbie. It’s certainly worth experiencing, but try and get those controls nailed down ASAP or you’re in for a frustrating time.