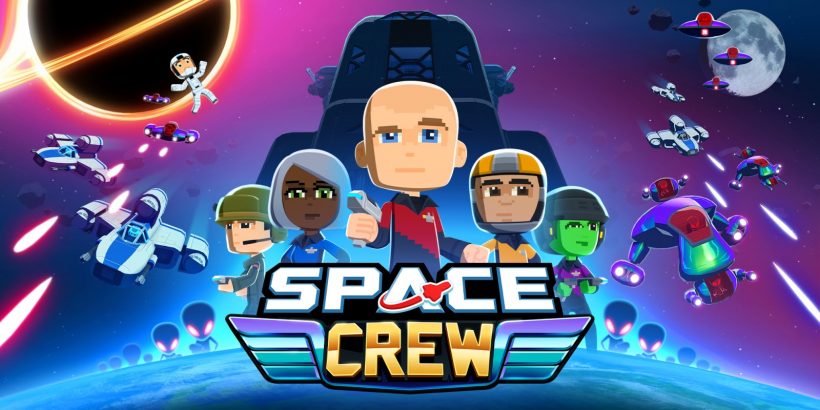 The developers of Bomber Crew have launched a strikingly similar strategy experience in Space Crew. Commanding six crew members, you’ll embark on increasingly dangerous missions in the name of surviving and destroying evil Phasmids. Players who are familiar with the first game will find themselves right at home here – although, we’re going from World War II to Star Trek.

The tutorial is a fairly simple trial-by-fire, with a few levels that slowly introduce you to the concepts. You’ll micromanage the crew’s actions as they carry out various tasks within their ship, and throughout the galaxy. Zooming out or “targeting” with ‘ZL’ allows you to view what’s around the ship, while most of the gameplay happens within the vessel. Meanwhile, the music ranges from completely barren to battle-tastic.

Each character has a designated role. When they’re in the right station, they can perform special actions. For example, the Engineer can redistribute power to different parts of the ship – a big help during battle, when you are willing to sacrifice some non-essentials for weapon power or shields.

Speaking of battle – peril lurks, especially if you opt for dangerous routes rather than safer ones. Not only is space itself filled with radiation and asteroids, but it’s also teeming with enemies who will stop at nothing to break down your shields. Although it’s easy to get attached to the adorable and fully customisable characters, they might eventually fall to one of these obstacles and need replacing. It’s all about budgeting your time well, because although you can slow it down during hectic moments and speed it up during slow travel, there’s no stopping to delegate.

I’d say Space Crew is a great option for younger players who enjoy this genre – however, it quickly becomes apparent that the controls are a bit much for any age, and present the main frustration. Namely, holding down ‘B’ and scrolling between crew members on the lefthand side of the screen is a pain on a slow mission, let alone while you’re being attacked and there are literal fires to put out. That alone turns time management into more of a concern than it needs to be – and it’s just one example of the not-so-intuitive controls.

Missions begin and end at the base – and once you return, you’ll reap loot and experience. Crew members will gain invaluable skills that make them much more useful in a pinch (more things to think about while you’re trying not to let everyone die). Here, you can also make adjustments to the vessel. When you’re all set and it’s time to sort through missions again, they’re helpfully sorted by difficulty, allowing you to work your way up to harder missions.

The difficulty does ramp up fairly quickly, and danger can also come on quickly. Although gameplay-wise, combat simply amounts to targeting enemies with your joystick (or a very sluggish motion control), chaos within the vessel – moving crew members, making adjustments – is where the challenge lies. Only those who learn exactly where each character needs to be in any situation will find consistent success.

The question is, is this a game worth learning? With plenty of charm and customisation, Space Crew certainly stands out compared to much of the competition. It’s hard to get over those controls, though, which are confusing at best. Then again, it’s also hard to write off a game with a sharp look and a formula that makes for hours of strategic space trekking.

Anyone who beams up to Space Crew will find it to be a fairly average strategy experience, with an enjoyable challenge and sharp looks to match – but only if they can put up with clunky controls.