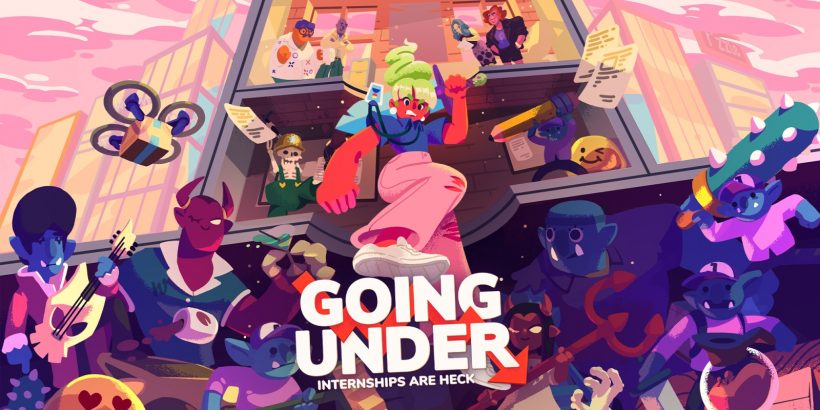 The work from home monotony that many of us are suffering from at the moment might make Going Under‘s marketing internship offer seem like a lovely change of scenery, but don’t let its popping, bright colours deceive you. Unfortunate marketing intern/hopeful Jackie gets a bit of a shock when she discovers that on her first day at her new startup, she won’t be making cups of tea or scanning in important documents, but rather clearing out the basement of an endless onslaught of deadly monsters. She’s only worked there for a few moments, but she’d already die for the company.

Like an Office Space-inspired fever dream gone fantastical, Going Under has you using anything and everything in your path as a potential weapon, once you’ve finished your morning meeting, of course. From keyboards, laptops, staplers, and office chairs, to swords, spears, rifles, and giant warhammers, every item has its own pros and cons that will suit the way you like to play. Nothing lasts very long, however, with weapons breaking fairly quickly, and so you’ll often have to think on your feet as you go, throwing pencils and chairs in place of spears and crossbow bolts in-a-pinch.

Of course, as with any roguelite dungeon crawler, modifiers love to pop up along the way to spice up the gameplay even further, and the hilarious choices in Going Under help Jackie to get her unpaid job done in some interesting ways. From perks that increase your weapon sizes ridiculously, to ‘Yeet’ bonuses that allow you to, well, ‘yeet’ things at enemies, there are plenty of boosters you can obtain during a run to help you check off the tasks on your peer-assigned workflow. And there are plenty of tasks and challenges, both big and small, that will be dropped on your shoulders by colleagues in the explorable hub world of the ‘Fizzle’ office, such as taking out enemies with specific weapons or collecting certain items.

You can also install a variety of apps that you’ll find in different dungeon rooms, which will give you other bonuses, like diversions from enemies, or coupons for purchasing items from stores on each dungeon run. It’s all stuff you’d expect from this sort of gameplay loop, but the light-hearted tone and humour (in keeping with the randomised element of it all) keep it fresh and entertaining, and levelling up skills or getting rewarded with more money to spend on upgrades makes you feel as though you’re never wasting your time.

Along the way, you’ll also be able to assign other employees at the company as ‘mentors’ for your run, giving you special abilities in return for completing their tasks while in the dungeon. The company accountant, for example, will grant you with slightly more cash each turn and give you access to a ‘Primo’ delivery service that allows you to handily order items on-the-fly. The CEO, on the other hand, much to the chagrin of said accountant, will brazenly give you the company credit card to spend away on, only for you to then find out that the debt manifests itself in quite a debilitating ‘ball and chain’ during combat.

While the gameplay loop is fun and addictive in Going Under, the presentation is where the game really shines. Not only have they nailed the marketing software aesthetic, with plenty of buzzwords and jargon dotted about in amongst the laptops and coffee cups, but the movements and animations of Jackie as she explores are a laugh, too, her Play-Doh-esque design conveying the overall feel in an instant as she – and the enemies – stumble from room to room. Even the dungeons themselves have their own unique weapons and designs, with plenty of variety on offer. There’s an extremely productive goblin taskforce, a demon-filled dating app dungeon with body pillows strewn about, and even a cryptocurrency business, with emphasis on the crypt bit.

Rather than your standard top-down or isometric view when exploring dungeons, Going Under opts for more of a third-person action perspective, giving you free rein of the camera. Combat, with its breaking weapons and lock-on system, is like a watered-down version of Breath of the Wild, and can become a bit of a flail-fest at times, particularly when there are multiple enemies targeting you at once, and you feel like you have to just roll around and hope for the best. Thankfully, this occasional jankiness seems part and parcel of the overall presentation, and the vast number of items at your disposal means you can crack on whenever, launching the nearest piece of furniture to quickly evade sticky situations.

Overall, it might not have the same precision or ultimate satisfaction that Hades manages to achieve, but its quirky premise, hilarious setting, and a seemingly endless supply of office weaponry make Going Under a joy to come back to again and again.  If the general idea and distinctive visual presentation catch your eye, and you like the gameplay loop of Hades but want something a little more light-hearted and satirical, this one’s a must-play, so put it on your company card as a necessary expense.

With plenty of humour and weapon variety, Going Under is a charming, vibrant dungeon crawler/roguelike that never gets old. If your current working environment feels strange, try this weird and wonderful one out for size.