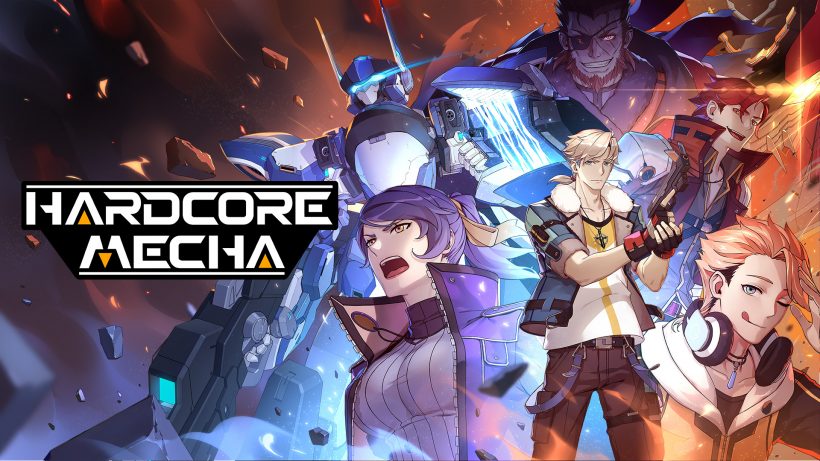 Imagine the things that you could achieve in real life with a mecha suit. You’d be able to rescue the cat from the tree without calling the fire brigade. DIY would be a blast. The school run would be far less stressful. Hardcore Mecha Developers RocketPunch Games, however, have other plans for us. Playing as charismatic mercenary Tarethur, the mission is to rescue a military lieutenant from a well-equipped terrorist organisation called Steel Dawn, although as the single-player campaign progresses through its generous quantity of missions, the task at hand deviates and Tarethur finds himself up to his neck in combat and plot twists.

There is an obvious manga influence in Hardcore Mecha, with mecha suits equipped with enough firepower and statistics to satiate any fan of tech, and an art style that draws inspiration from the many Japanese graphic novels found in the otaku culture. The manga stimulus has nurtured an authentic action platform title, although there are enough ideas in here to make pinpointing the game’s genre a little challenging: one mission could have you stomping through an enemy base firing your arsenal of weapons in all directions to defend yourself from the masses, and the next could take Tarethur out of his mecha suit and ask that he infiltrate a facility using the sort of stealth moves seen in a Metal Gear Solid game.

Training levels are available to learn the fundamentals of controlling your suit, and I would advise those practice runs are take advantage of, because initially it can seem quite a complicated process. Every button on your Joy-Con will activate something, and in the heat of battle, a certain fluidity is required to keep your health bar on the healthy side. Thankfully, restart points are quite generously placed, but all the same it’s frustrating to lose a life when you know what you want to do, but you just didn’t press the right button.

Missions are introduced with comic book style cut-scenes, and the visuals of the game are gorgeous. The characters have a hand-drawn art style and a cute appeal reminiscent of games as diverse as Metal Slug and Braid. When in your mecha suit, your character has a primary and secondary weapon, a jump/hover ability, a defensive stance, and a dash manoeuvre. Enemy variety is such that it becomes important to learn what will work best in each situation. There are also the obligatory boss fights (for which “Boss Battle!” is plastered across the screen in case you were in any doubt).

Throughout the game, the scale of the characters and indeed your surroundings adjust according to what is happening. A stealth level may zoom in on Tarethur sans mech suit, as he navigates the 2D environment hiding behind crates and evading the sweeping security lights to reach his goal. However, when you are in the mecha suit facing off against an enemy ten times your size, the screen pans out to take in the full spectacle. It’s a nice effect that adds visual variety to the different missions. The assortment of locations encourages further exploration of the campaign, to see what is next.

Completing a mission presents the results screen, indicating the time it took to complete, the number of times failed, and the percentage of enemies you eliminated. Different ranks are achievable, with S being the ultimate accolade. There are hidden areas and secondary objectives to discover on each level, and as you progress through the game an upgrade tree allows you to tweak your suit by choosing the perks that most appeal to you. Different adjustments do genuinely affect the handling too.

Besides the main campaign, a survival mode thrusts waves of enemies at you until you expire, and there are local and online multiplayer play modes too. Split-screen local battles work surprisingly well, either on the big screen or hunched around the Switch in tabletop mode, grasping a lone Joy-Con each. Online multiplayer currently only offers a Free-For-All battle option, but there is scope for RocketPunch to add additional options with a subsequent update; there is certainly space on the menu screen.

Despite all the positive attributes of Hardcore Mecha, there is a flaw in this heavy-duty stomping, and that is the occasional stuttering issues with the frame rate, not only when playing online but even in the single-player campaign. It’s not bad enough to severely inhibit the game but hopefully a subsequent patch will resolve the issue.

Overall, Hardcore Mecha is a generous package filled with plenty of gaming action. It’s all a bit tongue-in-cheek, with epic guitar riffs and some cheesy dialogue. On-screen text is voiced in Japanese, which adds to the Manga influence; although in the heat of the moment if you are not fluent in the language you may find you don’t have time to glance at the rather small text to absorb what’s going on. But don’t worry; there are enough cues on-screen to guide you to your goal even if you aren’t completely following the plot. Anyway, who needs a plot when you’re in a mecha suit?!

Beautiful artwork, a rich variety of missions, and lots of fun in single-player or with friends – Hardcore Mecha is a package well worth strapping into. There are some technical hitches, but these are heavyweight goods. Get stomping!