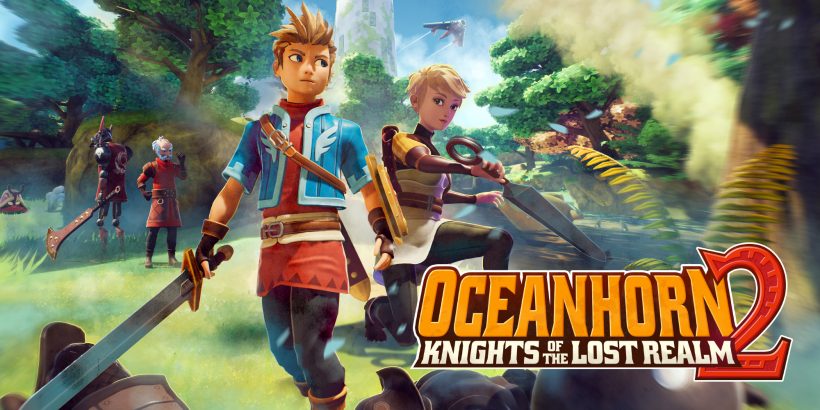 They do say that imitation is the sincerest form of flattery. It’s also said that there’s nothing quite like the original, and The Legend of Zelda is both the original and the best of its kind – no questions asked. It’s only natural that a development team would want to tap into what makes Zelda so good, if for nothing other than to ensure a bit of early success. A guarantee, if you will, that there is something to build upon in the future as a company starting out in the highly competitive game development landscape.

The original Oceanhorn, entitled Monster of Uncharted Seas, not so much tapped in, but instead took a sledgehammer to the notion ‘if it ain’t broke, don’t fix it.’ If Oceanhorn had been the product of a university student’s final assignment, it would have failed with plagiarism as the likely citation. There was more than just ‘a link to the past’ with that one, yet mobile origins and an absence of originality meant Oceanhorn was deemed lacking in some of the key areas we’ve come to associate with video games – it did receive some plaudits for its aesthetics though.

Three years have passed and Finnish developers, Cornfox & Bros., are back at it again with a Switch sequel. Mobile port? Tick. The Legend of Zelda origins? Tick. Young boy on a quest to save the land from the clutches of evil? Tick. Do we need to go on? There isn’t much that Oceanhorn 2: Knights of the Lost Realm does that hasn’t been taken directly from the The Legend of Zelda playbook, and this reviewer is in two minds as to what to think of it all.

For starters, it’s swapped old for new. A Breath of the Wild aesthetic has been perfectly placed over the world of Gaia, with excellent results. In short, Oceanhorn 2 looks and feels fantastic. There’s a faint familiarity to the luscious landscapes which invites you to explore, and you will be encouraged to do so throughout the campaign. Collectibles, power-ups, side quests, and puzzles make up the majority of the gameplay on offer here, all whilst fending off the foes that plague your land with your sidekick simpletons in tow.

On paper it’s perfectly plausible to consider Oceanhorn 2 the ‘complete’ open-world package. To compliment the aforementioned features, there’s great voice acting, a skill tree, and even a grappling hook. Unfortunately, in making a game so inherently Zelda-like, it subsequently lacks that cutting edge that makes games like this so successful: personality.

That lack of personality permeates through all aspects of the game, not least in the world itself. Style over substance would be the aptest description, as it’s undeniable that the game looks superb. Size and scope have been carefully considered to make a world that looks as though it’s living and breathing, and the abundance of colour adorns the screen – both in docked and handheld. Where it falters, quite considerably, is in the interaction with said world.

Enemies pop up in predictable places, looking, sounding, and acting all too predictably. When they don’t, all that’s left is a lifeless, linear landscape which is deceivingly simple to navigate. The smaller, more intricate environments and buildings fair far better, and this is probably where creative license has been applied best. It’s missing again though when you delve into the plot, even if its voice-acted delivery is well-done.

During missions within these villages and towns, you’ll continue to encounter enemies, boss battles, and puzzles. The former relies heavily on combat which is both enjoyable and well-designed. Clicking ‘L’ will bring up a weapon selection wheel and give you access to a sword. Shock. Shield. Shock. Arrows. Shock. And even remote bombs that can be thrown. Shock.

Less deserving of a sarcastic nod and more of an appreciative one is the simplicity of the combat and its rewarding nature. Fights don’t last too long and the wealth of tools at your disposal are easy to use. Similarly, the boss battles are designed in a manner that requires a creative approach and a bit of thought, without ever outstaying their welcome. These were the most enjoyable aspects of the game and gave a hint at the untouched potential of the development team.

Unfortunately, the same can’t be said for the puzzles. Whilst fairly intuitive, they fail to muster the same invention and innovation that games such as Breath of the Wild do so well.  Through no fault but my own, there were times I had to repeat some of the puzzles multiple times which always felt like a chore – something that the shrines of Zelda games rarely do.

There’s a confidence emanating from Oceanhorn 2 which feels a direct result of a perceived assuredness from the development team that Zelda sells. This couldn’t be more evident than in the eShop asking price. It’s priced considerably higher than the original, and whilst it could be argued that this is a grander affair, the same lack of originality plagues this one just as much. Perhaps even more so as we expected more from Cornfox & Bros. the second time around.

Oceanhorn 2 looks to offer a suitable alternative whilst we await BOTW2. Though there are rumblings of an excellent and engaging open-world adventure, Cornfox & Bros. haven’t quite left their mark with this game in ways they should have.