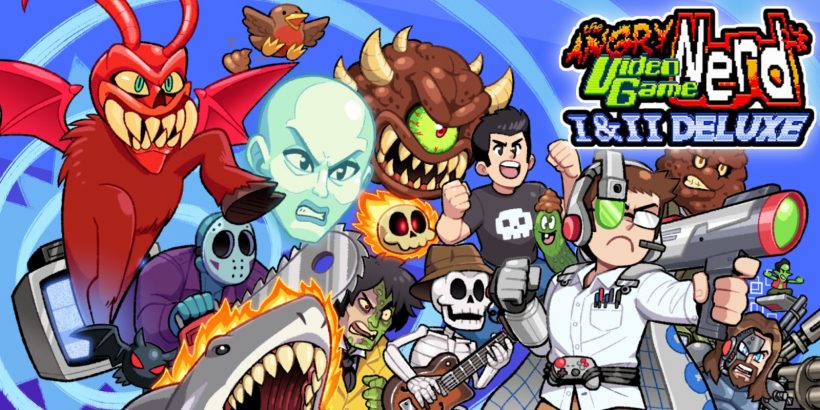 Those familiar with the legendary Angry Video Game Nerd character will know that his speciality is going “back to the past” to play the worst of the worst, but how about taking you back in order to play something good for once? Not only is this AVGN collection a brilliant love letter to the long-standing web series, but it’s also a more than competent 2D action platformer, bringing to light some of the frustrations and rage that the Nerd has felt over the years but in the right way. Well, mostly.

Sucked into the ‘game world’ and forced to run, jump, and shoot his way through an onslaught of game references, the first Angry Video Game Nerd title in the collection is similar to Mega Man in its setup, providing eight themed levels and a cavalcade of the Nerd’s mortal enemies to tackle as bosses – from Dr Jekyll and Mr Hyde, to ‘Bimmy and Jimmy’ (aka Freddy and Jason), to even Skylar, an obscure floating head character from a couple of Atari Jaguar games. These boss battles get even more extravagant and ridiculous in the second game, and the pop culture/gaming references are sure to humour even those that aren’t familiar with AVGN.

The unlockable characters in the first game mimick Mega Man‘s powerups, each having their own benefits and drawbacks that could help or hinder you, depending on the situation. The 8-bit NES inspired visuals are enough to attract any retro fan, with the animations and popping colours standardised between both versions for consistency. The level designs in the first game are fairly samey under the hood, with some enemies merely palette-swapped between worlds, but the themes do enough to keep it fresh.

The second game, ASSimilation, improves on the formula, adding more levels, each with their own themes and unique platforming challenges, and featuring a Super Mario Bros. 3-esque overworld. This time you’ll upgrade the Nerd with different pieces of kit that he’s worn over the years, switching out the Zapper for the Super Scope, or using the Power Glove to smash through blocks and find hidden collectables.

This sequel steps closer to the top class retro-inspired platformers out there on Switch such as The Messenger or Super Meat Boy, providing a memorable element to each individual level, and doing more creative things with platforming than the first game. This isn’t to say that the first one feels outdated or inferior by comparison, but when played as a collection, the two complement each other well, with the sequel’s approach giving a modern change of pace from the classic, eight-level hard-as-nails slogfest.

Of course, the Nerd is known for his bouts of rage, and this game really does manage to instil within you some of the same sentiments. There are some decisions that can get the blood boiling, and while they are often purposeful from the developer as a cheeky way of infuriating the player, they can cheapen the experience here and there. These include things like placements of death blocks meant to catch you off guard, fading into screen quickly as you run along, forcing you into a trial and error loop. It’s a shame, as the controls are tight and the platforming satisfying, so, for the most part, you’re blaming yourself rather than the level, meaning these tactics weren’t needed to keep players engaged.

These setbacks to the flow of gameplay aren’t too much of an issue, luckily; this new release has shortened the respawn time to get you right back into the action, and the sheer amount of difficulty settings mean it’s up to you how angry you get. I’d just about managed to get through the first game on the ‘Old Skool’ setting – which gives you 20 lives and changes all spike obstacles to instakill death blocks – but decided to tap out in favour of the normal setting after fearing I was getting too close to the Nerd himself in temper.

Finish both games and you’ll also be treated to an additional few stages, based around the Nerd’s memorable experiences with Bugs Bunny and his Crazy Castle line of video games. Overall, with the improvements and touch-ups made, and the presentation of the games alongside each other, this doesn’t just feel like both titles thrown together in a package, but rather the definitive way to play going forward. With close involvement from the folks at Cinemassacre, and as many game references and homages as you can think of when it comes to a web series that has existed for ages at this point, the AVGN collection is a must-buy for any fans that haven’t yet played either on another console.

Not only that, but for fans of old-school, retro-inspired 2D platformers, this collection is also more than worthy of your time, if you can handle the abundance of f-bombs and poop jokes (which admittedly aren’t as funny in text-form as they are in the show itself). While the saying goes that you can’t polish a turd, it seems Screenwave media have done just that with this improved, complete collection of games that form the perfect love-letter to the Nerd.

A must-play for any fans of the long-running web series, Angry Video Game Nerd 1 & 2 Deluxe is also enough of a hardcore platforming challenge to interest fans of the genre looking for a tongue-in-cheek throwback to NES days.