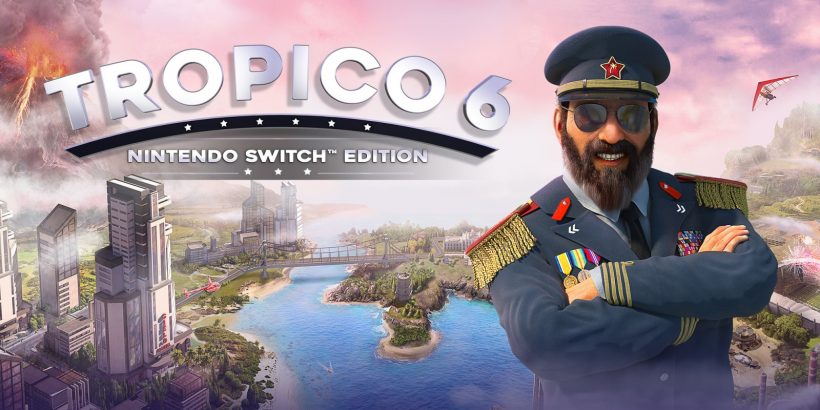 It’s fitting that hot on the heels of perhaps the most controversial election in United States history, the Switch should give us a chance to take control of our own nation state.

That’s exactly what’s on offer in Tropico 6, a city-building and management sim from Kalypso Media. This is the first time the long-running series, which started life as a PC title, has appeared on a Nintendo system. The game has you play as El Presidente, a dictator in the vein of Sasha Baron Cohen’s General Aladeen in the 2012 film.

Life isn’t easy for El Presidente. This is a highly complex, in-depth management sim with a tremendous amount of detail at play. The set-up is something akin to Kalypso’s earlier Switch title Railway Empire, with the ZL button bringing up a wheel from which you can select construction projects, establish trade links, invest your hard-earned funds, check on the happiness and satisfaction levels of your citizens and lots more.

Tropico 6 starts with one of the longest-winded tutorials I’ve ever experienced in a game, covering establishing factories for exports, building living accommodation, and managing the expectations of the different factions of your population: capitalists, the religious communities, and the revolutionaries, to name a few. But such is the complexity of the game, the tutorial doesn’t manage to effectively explain everything. On starting the game proper, where missions must be completed in accordance with a strict time limit, I watched the months tick away helplessly when tasked with improving the liberty aspect of my populace. You’ll need to score through the menus to find a hint as to what affects liberty – from my reading, guard towers and military presence harmed liberty, while the lists showed the building of libraries was one of the things which did the opposite. So, after setting about constructing libraries, I had expected to see those extra five points needed for the required level of liberty satisfaction come into being, but no – the figure remained rooted to the spot. I’m certainly not one for hand-holding in games, but there are times when things have really got to be spelled out.

And that’s a shame, because Tropico 6 is a moreish game full of personality. Even though El Presidente is somewhat of a behind-the-scenes character (you do most of your interactions with his loyal Penultimo), you can quickly find yourself becoming lost in the character of the game’s islands. Yes, this city-building takes place across an archipelago of islands, so you’ll be constantly swivelling and panning the camera in order to take everything in, and only by zooming way out will you be ale to see everything on screen at the same time. It’s fortunate, then, that the interface is presented so well, despite the obvious limitations of the Switch compared to the systems the series is accustomed to. Even minor details can be read clearly when playing in handheld mode, and while Tropico 6 is no graphical marvel by the very nature of so much going on on-screen at the same time, the tropic island setting lends well to some fantastic colour and lighting presentation.

What’s more, there’s a lot of content and lots to do. You can take on some pre-established missions or simply enter the sandbox mode to take more control of things yourself. Throughout, you’ll be peppered with requests from the different demographics of the island, with the religious asking for the construction of churches and chapels and the like, the far-left revolutionaries wanting libraries (offering source material to their liking, of course) and the general population simply wanting a better standard of accommodation. Neglect the building of homes for too long and the poor will take it upon themselves to build shanty towns around their workplaces. El Presidente can’t be having that.

While the primary goal, of course, is to balance the happiness of the populace with the consistent upswing of your available finances, there are other things you can have going on in the background. Trade routes can be opened for imports or exports, with just the one resource on each route. You’ll have to stump up the big bucks to open up all of the available trade route slots, and then the trade will take a set number of in-game months to yield fruits. The same can be said of ‘raids’, which have you sending islanders, including pirates, in search of people or materials at sea. You could end up waiting 24 in-game months for them to come back, so they aren’t a great option when your back is to the wall time-wise. Oh yeah – and you’ll have to fend off the occasional attack from external pirates.

If you enjoyed Railway Empire, you’ll definitely enjoy Tropico 6. The games are so similar in their presentation, with the main difference being swapping a travel network for city-building. Things do get confusing at times as they aren’t well explained, but it’s worth persevering, as the gameplay, much like in Railway Empire, is just so moreish. The DLC really should have been included, though.

The Tropico series was long overdue on Nintendo systems, and Tropico 6 is a stellar example. While it’s a little overcomplicated and unexplained in places, it’s a super deep and satisfying experience. No recount needed here.