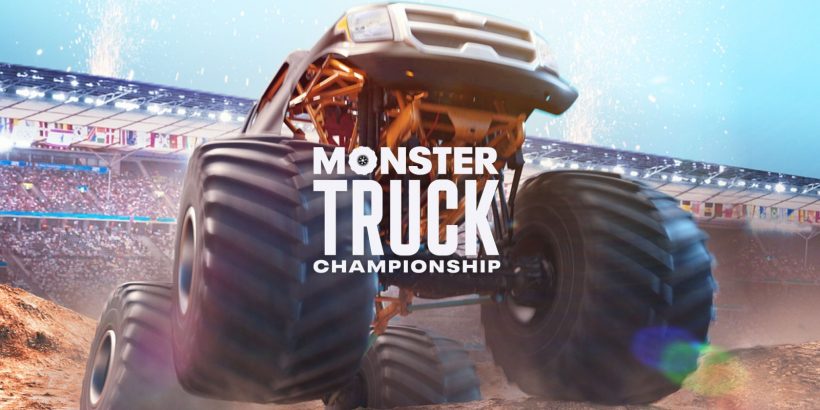 Who remembers Excite Truck on the Wii? It was a game that leaned heavily towards arcade fun rather than opting for an authentic trucking experience, but Monster Truck Championship wants to provide you with the thrills of racing, as well as the opportunity to fine-tune and modify your vehicle while micro-managing a racing career, with the financial implications that this entails.

The game’s main attraction is the Career mode, in which you take part in events throughout North America. Each event will comprise of a number of stages, from a pool of five different challenges:  Race, Drag Race, Time Trial, Freestyle (with points earned for stunts) and Destruction (use those big wheels to wreak havoc).

These five event types will be familiar to anyone who is a fan of monster trucks, and they present a solid foundation for potential fun. As with any racing games, the physics of the vehicles and tracks need to be finely-tuned to ensure a fair – and enjoyable – ride, but with Monster Truck Championship the overarching feeling is that these trucks don’t feel very, well… monster. They should feel heavy, solid and firmly in command of the road on which they drive. Here, there’s a lightness that detracts from the authenticity. At times it can feel like you’re steering a Mini on an ice rink; the raw power that you would hope to be harnessing just doesn’t feel there. Even collisions lack grunt.

Winning an event earns you some money, which can be spent on upgrading your truck, either cosmetically or mechanically. There are a lot of potential tweaks to be made, and in this respect Monster Truck Championship is a good catch for someone who wants to delve beneath the hood. Cash can be spent buying team members, which modify your stats, adding an additional layer of decision-making. An Engine Specialist will mod your engine, while a Logistics Manager tweaks the cost of running your campaign, by reducing event entry fees for example. There are several spaces to fill in your line-up and create your dream team.

Sponsors are another option, which ask that certain conditions are met to receive a reward, such as performing a particular manoeuvre during a race. The difficulty of the challenge that the sponsor asks is reflected in the reward given upon completion. It’s an interesting idea that allows you to choose the level of challenge that you want. (Think of the sponsors as side-missions, in essence).

The Career mode offers 16 different Monster Trucks and 25 different arenas to explore. It won’t take too long until repetition begins to set in, and you’ll find yourself revisiting familiar tracks once again. The commentary however does its best to keep the momentum going, and helps create a little atmosphere.

A choice of difficulty modes are available, but anything above Easy will require some skill at taming your vehicle. If you want a more authentic trucking experience, it’s worth opting for the in-car view while playing. Besides Career mode, the main menu also offers a Quick Play option in which you can create your own event. The online multiplayer mode was not available to try at the time of writing.

Unfortunately, Monster Truck Championship isn’t quite the experience it could have been. The presentation is functional rather than thrilling, and the physics take some getting used to. “We’re halfway through but we’re still waiting for something mind blowing”, announced the narrator while I was taking part in a Freestyle challenge. I kind of nodded my head in agreement.

Monster Truck Championship is a variable ride. There are some interesting management elements and truck upgrades to explore, but the actual racing feels oddly lightweight. Fans of the source material may find more to enjoy.