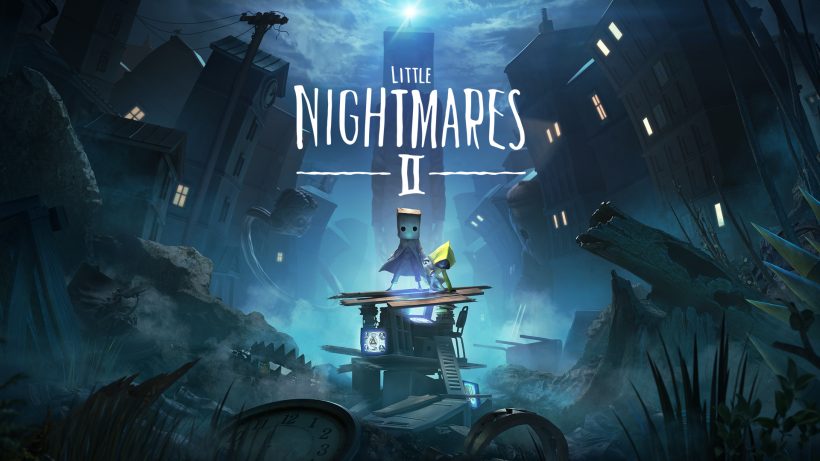 When you were a child, what frightened you the most? Aliens? Monsters under the bed? The dark? How did you deal with your fears? Hiding under the blankets or turning on the lights?

But what if there are no blankets… no lights? What do you do if your nightmares are all around you, and there is no waking up?

The game’s predecessor, Little Nightmares, originally released in 2017 (2018 for the Switch). This first instalment put players into the little yellow raincoat of Six, a nine-year-old girl armed with nothing but a lighter.

In Little Nightmares 2 our hero is Mono: a little boy wearing a paper bag over his head. Mono is trapped in a horrifying world that has been twisted by an ominous tower, sending devious transmissions through televisions.

Mono meets up with Six, and together they must puzzle and platform their way through the horror to get to the bottom of what’s wrong with the world.

Players will need to use all of the cells in their brain to navigate the puzzles and traverse the terrain, in order to avoid the horrific denizens of this warped world. Mono can run (Y), jump (B), climb (ZR), and crouch (ZL): all very useful skills to stay alive.

While Six is an NPC companion, she isn’t a useless burden that you need to protect. She can be helpful; while she does follow you, she is more than capable of using her wits to hide or run from danger. If there’s a ledge that’s a bit too high, she’s always there to give Mono a boost up.

This is a huge relief for players that are not fond of “escort mission” style gameplay that requires one to protect a helpless (or useless) NPC; you do not have to babysit Six, in fact, Six can oftentimes be the one helping to guide the player!

Traversing through this nightmare will have players constantly on the edge of their seats; moments are varied: terrifying chase scenes with morbid humanoid-creatures, tense moments of stealth, and brief moments of calm before, and after, the storm.

An artistic masterpiece from start to finish. However, this is no van Gogh’s Sunflowers; instead LN2 is much more reminiscent of something macabre by Hieronymus Bosch (The Last Judgement anyone?). The areas Mono and Six slide into all have dark and oppressive hues, and colours that evoke a feeling of helplessness and profound struggle.

Every single room Mono walks (or runs) through is thoughtfully crafted. There is no HUD on the screen, which allows players to become fully immersed in that creepy feeling and ambience that the game is trying to convey. The entire game is constantly screenshot-worthy, and the five different areas that players make their way through are all very different and distinct from each other. Every frame is a feast for the eyeballs. When Mono and Six reach the city and the camera slowly pans out to show just how small these two children are in this oppressive world; or when riding along through thick fog, the perspective zooms in to show us just how close, yet far apart, our protagonists are from each other.

Little Nightmares 2 is swimming in metaphors, themes, and symbols. This allows players to help tell the story of Six and Mono just as much as the developers, and because of that, no two experiences will be exactly alike.

The screen is devoid of dialogue or text (other than the few times when some writing pops up to detail a control mechanic that you may not have grasped yet). This lack of text and dialogue allows the game’s sound design to shine, becoming an integral part of the tale and a character of its own.

While our heroes, and their enemies, might not speak words, there are plenty of horrific and disturbing noises coming from them. Heavy breathing, shrill shrieks, shotgun blasts, even the simple sound of television static becomes one of the most tense and terrifying sounds you’ll ever hear.

The game is rather short. However, there are hidden collectables in the four main stages. Notably: hats! These are very well hidden and will keep those perfectionist types coming back for more.  LN1 had a few DLC stories, and there is already a paid DLC for its sequel showing up in the eShop.

Little Nightmares 2 is a game that deserves to be played. The story is rich, with many surprising twists and turns. I, personally, encountered a few, very minor bugs as I was playing through, but it’s nothing a quick patch wouldn’t fix up in a jiffy. Playing through Little Nightmares before hopping into 2 is likely going to provide a more robust experience, even if it’s simply knowing who Six is beforehand. Though, if you decide to tackle 2 first, it’s likely you’ll be purchasing the first game afterwards anyway.

Little Nightmares 2 is one of those games that should only be played at night in the dark. Amazing art design, spine-chilling music, and smooth gameplay. If you like horror, don’t hesitate to pick this one up as soon as you can.