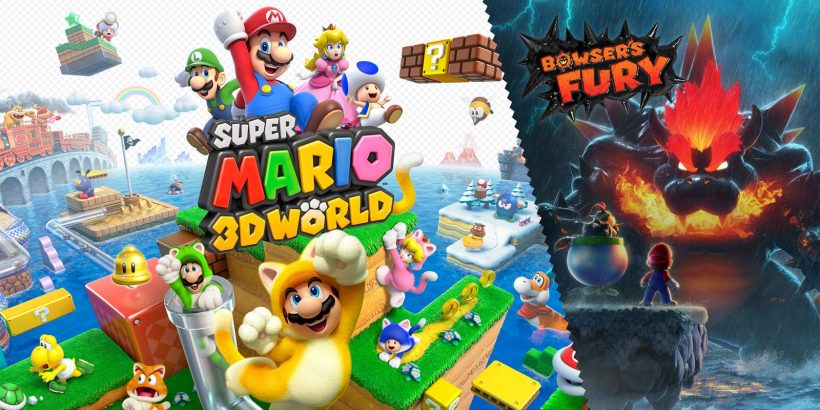 How comforting it is to see a familiar face. Nintendo’s most iconic character has returned, with a double pack of entertainment in the form of Super Mario 3D World + Bowser’s Fury. Thematically linked by Mario — and, indeed, with a particular emphasis for Cat Mario — the two games are nevertheless a disparate combination. One is a remake of a Wii U release that restricts your adventures to set worlds with set time limits, a spiritual successor to Super Mario’s 8-bit and 16-bit days. The other’s a brand new open-world event more akin to Super Mario Odyssey. It’s a blast from the (recent) past and a fresh new mini outing for Mario, in one package.

Super Mario 3D World is the game that conceptually bridges the 2D and 3D Mario eras, with worlds that essentially offer a set path from A to B, and an element of three-dimensional exploration. Upon its release on the Wii U, Super Mario 3D World introduced new enemies, power-ups, and items to Mario lore, while still embracing the rich heritage of the series. The whole package has made it to the Switch, albeit with some tweaks. The revolutionary Super Bell power-up, which transforms our hero into Cat Mario, has been given an upgrade, allowing the feline fellow to climb higher than he was able to during the Wii U era. Those cat claws also still provide the ability to clear enemies with a swipe, and all characters benefit from an increased running speed.

Each world within the game is divided into separate levels which, in typical Nintendo fashion, often possess a uniquely entertaining feature that may not resurface again. Your journey between locations is visualised across a world map in which you can roam freely, potentially visiting a Toad House for some power-ups, or a fruit machine to try your chances on some extra lives. There are also Captain Toad levels, now playable with up to four players on Switch.

Unlike more recent offerings such as Super Mario Odyssey, casual exploration is off the agenda, as each level features a timer for you to keep a wary eye on as you navigate your way to the finish flag. Stopwatches can be collected along the way to add a few precious seconds, and these are usually located near a warp pipe to a bonus area. Each level has three glistening green stars to find, and there is also the allure of collectible stamps featuring iconic Mushroom Kingdom inhabitants. These stamps can be put to good use with the game’s photo mode, which allows you to freeze-frame the moment and capture snapshots of your travels, while optionally adding any of the stamps that you may have found.

The big push for Nintendo with this iteration of Super Mario 3D World is to encourage multiplayer gaming. As with the Wii U original, you can play locally with friends, but now the potential for fun has opened up to online play, and the process of setting up or joining an online game is simple in execution.

Playing online during our review resulted in a mostly smooth experience, with very few moments when frame-rate issues surfaced, and no obvious latency concerns when it comes to controlling your character. The bigger issue is the reality of the in-game camera — whether online or played locally — trying to track up to four players as they scramble around the level. There will be moments for everyone when they’ll be using the sort of words not usually allowed in the Mushroom Kingdom, as their character drops off a ledge that they had difficulty seeing amongst the chaos.

This sense of injustice can surface when playing single-player too. Super Mario 3D World harkens to a time when Mario levels were more ruthless in their challenge: a poorly executed jump can send you back to the start. Experienced players will lap it up but, nevertheless, the occasional camera angle can make it difficult to judge a jump, especially given the use of three dimensions within a constricted viewpoint.

The variety of levels on offer is such that different locations may require a different strategy. Aside from the slight variances in how the other playable characters handle (Luigi with his high jump, Peach’s longer one, and Toad’s faster walk), there’s also the decision of when to work as a team to reach the end goal, when playing in multiplayer. Plessie’s Plunging Falls requires each player to work collaboratively, riding on the back of Plessie the dinosaur across an obstacle-filled lake for example, while Mount Must Dash encourages competitive racing to the checkpoint flag; in essence Mario Kart on foot.

Super Mario 3D World on the Switch looks truly marvellous. Levels are filled with eye-popping colour, and the memorable soundtrack pools a variety of genres including cool jazz, orchestra swells, and TV gameshow jingles. There is a wealth of finely tuned gameplay here, and a constant sense of discovery. It’s a bridge between generations that neither reaches the heights of Super Mario World or Super Mario Odyssey, but is happy to play creatively in the middle ground between the two.

Looming ominously beside Super Mario 3D World on the main game menu screen is Bowser’s Fury, a completely new adventure for Mario. For anyone that enjoyed the open-world exploits of Super Mario Odyssey, Bowser’s Fury works as an unofficial mini-sequel, sharing similar DNA with an abundance of goodies to discover in a free-roaming environment.

Bowser is not himself; even his son admits that his level of rage is beyond the usual boundaries. He has grown, too, literally becoming Mario’s biggest threat yet. With Bowser Jr. at your side, controlled either by AI or another player, Mario must try to resolve the problem of the over-sized Fury Bowser.

As the game begins, the sun shines down on the glistening waters of Lake Lapcat, and cute kittens perform for your attention with a playful dash or a toy ball. Familiar enemies are present to be ground-pounded, and Question Blocks await your discovery. Plessie the friendly dinosaur is on-hand to act as your taxi service across the waters between little islands, and it all seems rather pleasant.

But when Fury Bowser wakes from his slumber, the sky darkens, clouds gather, and a storm strikes the land. Up until this point, Bowser’s Fury feels comfortably (and enjoyably) like Odyssey DLC, but the unique IP of the game hits hard as an all-powerful Bowser strikes with a barrage of flames and burning rocks. Mario’s only means of defence is to hide until his fury abates, in a style of play that feels like the Mushroom Kingdom’s version of survival horror.

Once Bowser resumes his slumber, Mario can continue his exploration with more ease. His only hope is to search for Cat Shines. Find enough and the Giga Bell will become available, allowing Mario to grow in size and fight back against Fury Bowser. Those Cat Shines are, of course, earned by completing various tasks, whether it’s a timed challenge with switches, a ride on Plessie’s back through gold rings on the lake, or a mini boss fight in an enclosed battle arena. You can also amass quite a collection of power-ups to help, with the ability to activate one of them when required.

Bowser Jr. can offer a helping hand as you play, with a Ground Pound attack and a paintbrush which he can use to swipe those pesky Goombas away. He can also paint power-ups for you, which spring into life from his artwork. For a second player, Bowser Jr. offers just enough gameplay while remaining the sidekick to the star of the game.

Bowser’s Fury offers at least three hours of fun, with the option of searching for any undiscovered Cat Shines even after you have battled Fury Bowser for the final time. Bowser’s attacks grow in intensity as the game progresses, and battling Fury Bowser on a large scale is hugely (no pun intended) satisfying. The final showdown is a superbly inventive finale, not to be missed.

Is Bowser’s Fury a mini taster of things to come? Could it be that Odyssey 2 will consist of one seamless open-world environment, devoid of loading screens between locations? Regardless of what the future holds, Super Mario 3D World + Bowser’s Fury is an equation worth solving.

Super Mario 3D World + Bowser’s Fury is a Double Cherry of entertainment that rejuvenates a Wii U classic while also satiating the appetite of fans looking for a completely new adventure. We’ll never tire of Mario, will we?