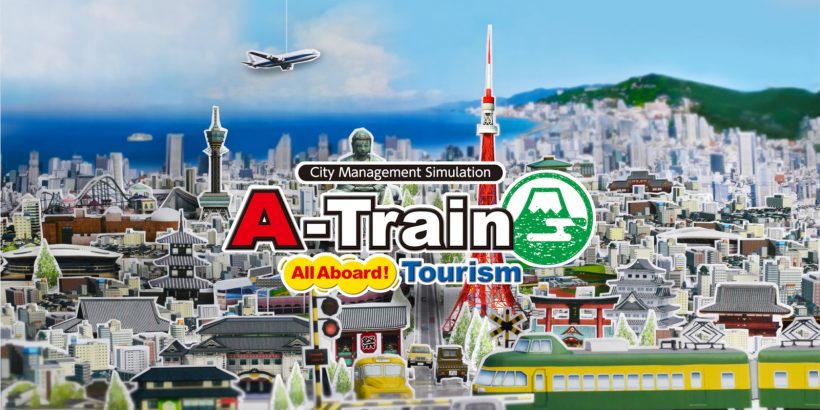 No matter how advanced gaming gets, or how many gazillions of megapixels are crammed in to create the most ultra-realistic visual experiences possible from a gaming system in your living room, the more modest-looking affair of a management sim will always be present and correct.

A-Train – referring to the Japanese mode of transport as opposed to the former WWE wrestler who also went by Albert and Lord Tensai – focuses on urban development, with you acting as the president of a railroad company. Railway Empire was a competent similar effort from Kalypso Media last summer; now Artdink are entering the exclusive Switch market of games having players establish a railway network to connect burgeoning communities across a map. It’s a first appearance for the long-running series on Switch, but not for a Nintendo system in general – both the DS and 3DS got entries, while the Wii Virtual Console got in on the act too.

Such is the nature of games in this genre, there’s no blissful period of getting to know the mechanics: you’re going to be using full brain-power from the word go as layers and layers are added to the management element of this sim. Laying down lines is easy enough – easier than in Railway Empire, for that matter – but you have the added aspect of having to buy land if some pesky third-party buildings end up getting in the way of your ever-encroaching bastion of infrastructure. Luckily, there’s a crack team of advisors on hand to help you through things, assisting you with figuring out just what it is you need to know to negotiate the game’s many menus.

What happens away from the train is arguably even more important to the gameplay than what’s happening aboard it. Very early on, you’re advised that the income from ticket sales alone is not going to be enough to turn your fledgling business into the superpower conglomerate that it ought to be. Trading land plays a big part in your success, and improving a village’s transport links to crucial amenities will eventually have it grow to the point that it becomes a town. That’s a lot to worry about – you’re making sure the railway is all in smooth operation while also pouring over the urban planning side of the game, and that’s before you start directing your concern towards mastering the stock market.

A-Train is noticeably easier to operate than Railway Empire was – from placing down trains to setting which direction they need to go, things generally feel more intuitive here. There’s quality-of-life aspects like fast-forwarding time to reach the completion of build projects once you’ve run out of activities to do (though that is rarely the case). There’s the option of just forgetting about the management altogether and simply taking in the viewpoint from the train and watching your hard-crafted cityscapes fly by. There are even touch-screen controls to be made use of, if you think they’ll give you a better handle on the management action.

But there is far more going on here and, in this instance, that’s not always to the game’s benefit. Expect to find yourself micro-managing everything – the boring, nerdy, fiddly bits which some other titles might kick to the curb in order to make things more interesting are well and truly present here, and for that reason there were a lot of instances in my own time with the game which made my head hurt due to the sheer brunt of brainpower required to comprehend everything. After all, you’ve really got three major objectives at play all of the time: to expand the railway network, to sky-rocket the economy, and to get those tourism yen soaring. Yes, you’ve got your team of advisors, who miraculously look exactly the same age no matter what in-game time period you’re playing through – but the information overload is very real. They’re more like information boulders, about the size of the ones Indiana Jones runs from, and the game wants you to juggle them.

A relaxing game this is not – it’s one of the most detailed and hands-on experiences of any simulation game you’ll find. There is hand-holding to a degree, but the level of management nous required to be stored away in your brain in what is a short amount of time makes for very tough going. You really have to pay close attention to your advisors’ suggestions, but even then as soon as you’re left to your own devices you’ll be likely to stare blankly at the screen as you probably used to when your maths teacher asked you why you were staring out of the window. Rewards become available eventually – improving your train fleet with higher-capacity models, or even plonking a ghastly and hideous steel skyscraper in the middle of one of your blossoming communities, are the pay-off for persevering and committing all of the management elements to memory. But your Joe Bloggs player just isn’t going to get there.

As a result, this is a niche game series which will categorically not convert the uninitiated. When a game hurts your brain, it’s hard to put that to one side and to start actually having fun – that’s where A-Train seems to have crossed to the wrong side of the tracks.

A-Train: All Aboard! Tourism is just about as complex as management sims get, full of menus, variables, budgeting and countless other aspects that genre fanatics love. It’s far too complicated for your average player, though.