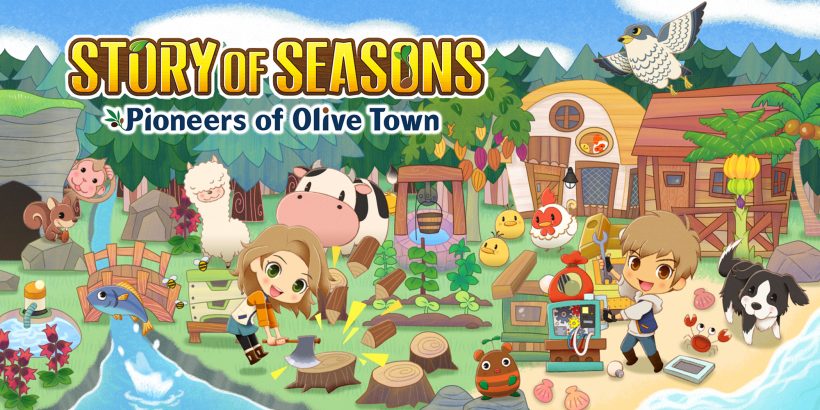 The team behind the Story of Seasons franchise, Marvelous Entertainment, has been providing us with exactly that during the four years that the Nintendo Switch has been in our homes and hearts. From the unique and beautiful Doraemon to the superb reimagining of Friends of Mineral Town, this talented group has known what works and executed it exceptionally well. On the surface, it would seem rather apt that the latest instalment would make reference to the term ‘pioneers’ as the team seeks to reinvent the faming sim formula once more.

Unfortunately, that ambition is never fully realised and the early promise that much of Pioneers of Olive Town is founded upon is let down by performance and personality issues. That isn’t to say that this game isn’t a good one – far from it – but it is a constant reminder that this game could, and should, have been the best the series has seen to date.

For fans of this franchise and of others of a similar ilk, Pioneers of Olive Town follows a tried and tested formula whereby the protagonist inherits a farm and needs to return it to its former glory. By sowing, watering and harvesting fruit and vegetables, your wealth increases which, in turn, allows you to expand your farm and develop your relationships with the townsfolk. In this regard, it’s the same Story of Seasons that so many know and love. There are other familiar facets to the gameplay, namely tending to animals and mining for ores to improve the tools you have at your disposal.

After the release of the much-enamoured Friends of Mineral Town reimagining less than 12 months ago, it would be fair to say that significant changes needed to be made to the formula to make Pioneers of Olive Town relevant. What that reimagining did for core followers of the franchise is going to be difficult to better, hence the new artistic direction, the expansive world and the introduction of mechanics seen in both current and classic games across the genre.

As a long-standing admirer of farming/life sims, I’ve played my fair share. The game that springs to mind when looking to adequately explain the direction of travel for Pioneers of Olive Town would be My Time at Portia. It shares so many similarities, both on the surface and within. By introducing crafting mechanics, skill levels and material makers, it bears an uncanny resemblance to Portia. Ordinarily, this would be a compliment of epic proportions as Portia remains one of my most played games on the Switch. It’s a game that consistently captures and enraptures me, so much so that I can subjectively forgive any of its shortcomings.

In the case of Pioneers of Olive Town, though, I can’t – and that’s disappointing. There’s no doubt in my mind that if I were asked to design a Story of Seasons game, this would have been pretty close to what I would have come up with. It looks and feels current. It incorporates some of the best gameplay elements the genre has seen. And it’s as complex or as simple as you want it to be. These are staple farming simulation goals, and the team can be commended for knowing the audience so well.

Pioneers of Olive Town also tightens the experience through subtle but significant changes: progress bars appear when chopping down tress and smashing rocks; chicken feed can be placed in bulk so you don’t have to remember to do it every day; an interactive map shows who is where and when. For the uninitiated, these are huge inclusions. The ability to see at a glance what time all of the shops and services are open and what days they are closed is another cracker too. It is evident that a lot of time has gone into innovating that core gameplay loop.

It’s with the heaviest of heavy hearts, therefore, that I report that behind all of these enhancements is a lack of personality and charm. Whether it’s the art style or the character dialogue, there’s something that feels significantly underwhelming. I can’t connect with the cast, I haven’t become invested in the quest to develop the town, and I’ve found the farm to be so large it feels disjointed. There’s a warmth and a comfort associated with the Story of Seasons games and it seems as though the age-old adage that ‘bigger is better’ hasn’t quite paid dividends here.

This proves to be another stumbling block where performance is concerned. Whilst games like this don’t need 60 frames per second to be a success, there is something to be said for a consistent frame rate. The ambience of farming sims is what sets them apart from other genres, and the persistent frame rate dips in Pioneers of Olive Town are as much a frustration as they are a disappointment. Four years working with the same hardware and with a number of successful games under their belt already, performance issues are becoming less and less forgivable. We’re aware of an imminent patch to address performance issues, though.

When you’ve set the standard for farming simulation games, improving upon the design can prove difficult. Experimentation is necessary and Pioneers of Olive Town feels very much one of those. Close, but not close enough.

Pioneers of Olive Town is its own worst enemy, tightening and unravelling in equal measure. What’s left is a farming simulation game that hasn’t yielded the best harvest just yet. More sunlight and a drop of water could do it, though.