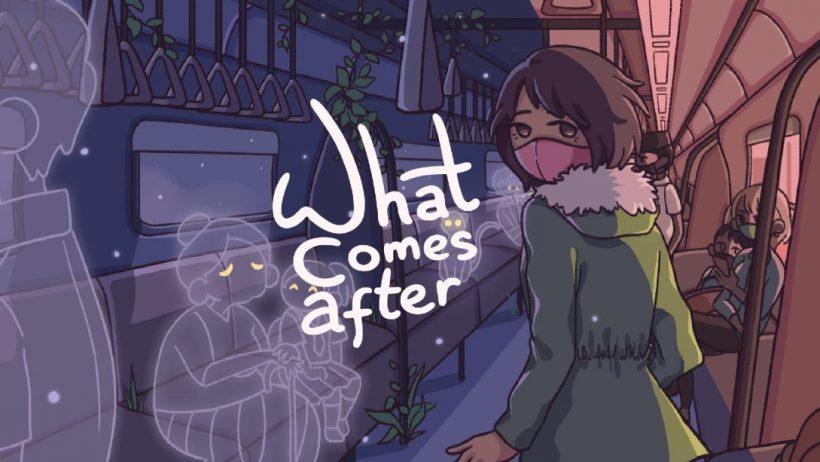 Having already proved his penchant for crafting meaningful characters and natural-sounding dialogue with Coffee Talk last year, developer Mohammad Fahmi is back at it again with another short adventure focused on conversation-driven gameplay. This time, however, the subject matter is a lot more sensitive, touching upon themes like the afterlife, suicide, and how humans attempt to comprehend their own sense of self-worth. Such topics might seem extremely lofty for a bite-sized visual novel boasting a cartoon art style, but What Comes After is a profound experience that explores and weaves them all together beautifully.

What impresses me most about What Comes After – and Fahmi’s writing, specifically – is just how natural it all comes across. Here you play as Vivi, a teen just about to enter young adulthood, who you can quickly tell is wrestling with the simple thought of whether or not she still belongs in this world. Not once did I fail to connect with her personal plight, despite never having such low feelings of personal self-doubt or anxiety myself, as everything she says and the way she communicates with people always feels entirely relatable and believable. Her story actually forced me to consider life and the fragility of it in ways I haven’t had to for an awfully long time.

To some this might be a quaint little 2D side-scroller about a teen trying to find her way in the world, but for fans of heartfelt character journeys, What Comes After is a masterclass in small story design. The basic setup has Vivi caught between the living and the dead on a train heading to the afterlife. Luckily, her unique status means she definitely gets to return home. Yet the only thing for her to do until then is to speak to her ghostly companions, finding out how they lived and what they would do differently so as to inform her own future life choices.

From a gameplay perspective, all you do is move through the train’s various carriages and continuously click A to engage in dialogue interactions with characters; you’re not even given any leeway by way of branching decisions or dialogue trees. But then, What Comes After isn’t a game about offering up your own perspective on any of the weighty topics being discussed. In many ways, you’re rather just a passive observer to Vivi’s brief flutter with the afterlife, chatting to people from all walks of life before they move on to what awaits them. Without giving too much away, the perspectives on death from animals and plants are just as tantalising as any presented by humans.

The first time I played through What Comes After it took me less than an hour. Then, once I understood the emotional ride I was in for, I immediately jumped back in for a second playthrough to really dissect the different conversations between Vivi and the train’s passengers. Most discussions begin expectantly at first, with people maligning about how they wasted their time on Earth or how they didn’t live fully enough. Eventually, though, I found myself getting quite weepy soon after speaking to a ghost elephant whose parents had lost their tusks. Vivi finds nuggets of emotion in the strangest of places.

For all its heavy, often quite dark subject matter, this is a visual novel that still finds the time for moments of levity. A good example of this is the train’s chef, who only appears in one scene but ended up being one of my favourite characters due to his insistence to read Vivi’s mind despite her pleading not to. Much like life itself, the individual moments you share with these people are all too fleeting, yet almost all are equipped to entice the odd chuckle out of you in addition to making you think deeper about life.

Unfortunately, because What Comes After is so story-driven and brief, I’d be remiss to go into specifics about any more moments that touched me. Just know going in that it’s best experienced almost like the episode of a TV show – one with a sincere central message that you’ll likely want to revisit several times. Whether you’re a new player seeking an interactive story you can just pick up and play casually, or a more seasoned professional who wants to be reminded of how much of a gift life is, writer Mohammad Fahmi and the rest of the team at Fahmitsu have done a wonderful job creating a relatable story that respects your time.

The graphics might be simplistic and the experience may be short, but neither of these criticisms are enough to dampen the important message sitting at the core of What Comes After. I empathised with Vivi the whole way and wanted her to find the value of living by the time the narrative reached its end. And though the game makes quite clear early on that she will have another chance at doing so no matter what, slowly witnessing her come around to the concept made for a fulfilling journey. This is a story I didn’t know I needed to hear until I experienced it, and one I think everyone should play. Now it’s available on Nintendo Switch there’s no excuse not to.

What What Comes After lacks in length, it more than makes up for with engaging character dialogue and a willingness to discuss lofty themes in a balanced and emotional way. This is a visual novel worth flicking through.