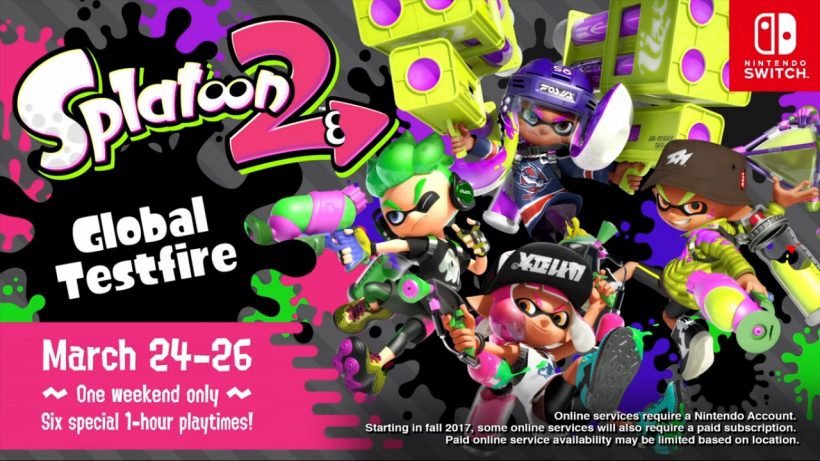 We’ve got news on what’s making the jump to Splatoon 2 (and how), LAN Play, Private Battle Spectator View, and even a late-March Global Testfire.

In the upcoming Splatoon 2 you’ll find (alongside new content) the same kinds of weapons and gear that you found in the original… but they won’t necessarily be exactly as you remember them. Producer Hisashi Nogami has revealed in a recent interview that while two years have passed in the real world since the launch of Splatoon, two years have also passed in the game; meaning that fashions have evolved, and so has technology. This extends past things like weapons and gear however, as other things have become more modern too.

For example, things like the user interface and map display system have also evolved – though somewhat less because of the times, and more to fit the Switch and its unique abilities. Controls have been tightened up as you no longer have two screens to look at simultaneously (the TV and gamepad) like the Wii U, and the map has gone 3D – offering controls that react to gyro in order to give you a more fitting visual representation of what’s going on around you.

These interaction related tweaks (control and map systems) are then combined with some much asked for internet protocol tweaks (a smaller packet size, matching systems that pair you with compatible connections) in order to deliver a more refined and quality online experience no matter what you choose to play with. All around fixes are great, but if you’ve got a bad online experience they seem a bit wasted – right?

Moving on from the Nogami interview revelations for a moment, we have also learned that Splatoon 2 will have LAN Play and Private Battle Spectator View features. Combined, these two features will allow you to bring up to 10 systems together – 8 players, and two spectators – via wired LAN.

To achieve that goal of 10 systems you must use the Private Battle mode; which is 4-on-4 with regards to active players, but now allows up to two players to spectate. Spectators of the game will have the unique ability to switch between overhead and third person cameras, allowing them to watch or even commentate live gameplay.

Get a quick look at spectator view in action below;

As we jump back to Producer interview details we’d like to remind you that Splatoon 2 is definitely an evolution, but the developers know that new players will be jumping in as well as the returning ones. For them, they’ve included a single player component; styling it to teach you the basics and let you get comfortable before you jump online for competitive play. The single player campaign is said to be about the same size as the original game’s campaign, so on the flip side you should know what to expect if you’ve played the original.

Aside from the things that effect gameplay, there are other things that have evolved and changed as well – and according to the interview we’ve moved from pure rock to music that’s “more advanced and with a twisted feel.” I’m not sure what that means exactly, but it sounds interesting to say the least. 😉

Am I getting you a bit excited yet? Well that’s to be expected! Hold onto your hats though, as the next bit of non-interview news might be the most exciting bit of all; Splatoon 2‘s Global Testfire is headed our way late this March, offering a chance to try a demo version of the game well before its release!

The Global Testfire event will apparently run from March 24th ’til 26th, offering a total of six hours of play if you catch all of the following playtimes;

As for what it has to offer the player to try, it seems that the content included in the Global Testfire will be similar to what was being offered on the Nintendo Switch Preview Tour – the new Splat Dualies, the Splat Roller, and the Splat Charger among the four available weapons. More information on when the demo (including when you can download it) will likely be headed our way in the coming weeks, so keep an eye our for more information very soon.

Splatoon 2 is due out this Summer on Nintendo Switch.

Paint me green, I want it now!