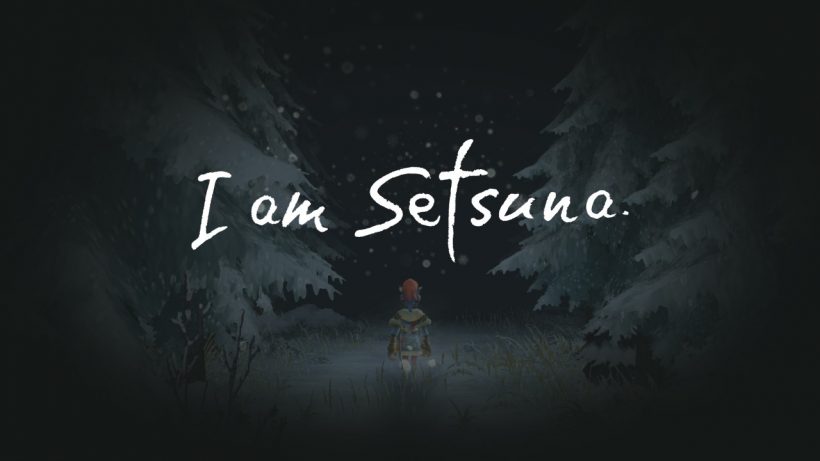 I am a worthy launch title.

With the Legend of Zelda launching alongside the Nintendo Switch, you’d be forgiven for forgetting about the other titles gracing the launch line up – but by overlooking these games you’ll be missing out on some gems. One such gem is Tokyo RPG Factory’s I Am Setsuna; a dark and sprawling JRPG which fits Nintendo’s new system like a glove.

It’s not often you’ll come across a protagonist who doesn’t really care so much about his objective. A character who spends more time being sarcastic than trying to make friends, but in his own way still out to help those in need, even if he did start off by trying to kill one of them.

It’s probably no wonder our hero – Endir – comes across the way he does; the winter world of I Am Setsuna is one gripped with sadness. Monsters rule the land, and to make matters worse it’s inhabitants have got it into their heads that sacrificing 18-year-old girls will somehow appease these demons. Let me save you the obvious leap, as it doesn’t. 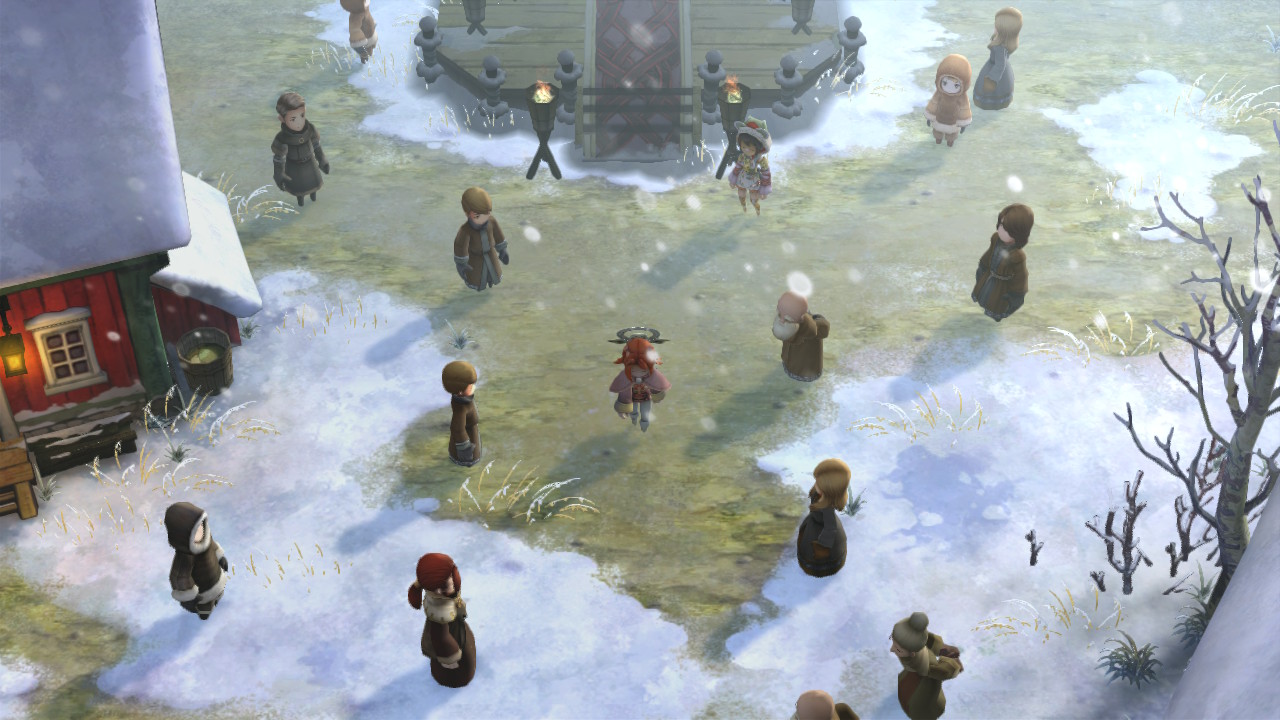 Endir’s mood is hardly helped by these circumstances, so when a mysterious figure approaches him asking that he assassinates the latest Sacrifice, an 18-year-old girl by the name of Setsuna, he doesn’t think twice. In a perhaps unsurprising twist however, he fails his quest and ends up accompanying Setsuna and friends on a journey to give up her life for the greater cause.

While the story could be described as quite minimalist, the action certainly isn’t. As you wander the vast lands on the way to the final destination, you’ll come across all manner of monsters to eliminate – and you’ll be able to do so using the game’s active combat system. Combat is time sensitive, therefore if you take too long to attack the enemy will take advantage, and there are often times where they get a few hits in before you do. This is fine against smaller foes, however the time factor means it’s crucial to use your attacks more efficiently against larger monsters. 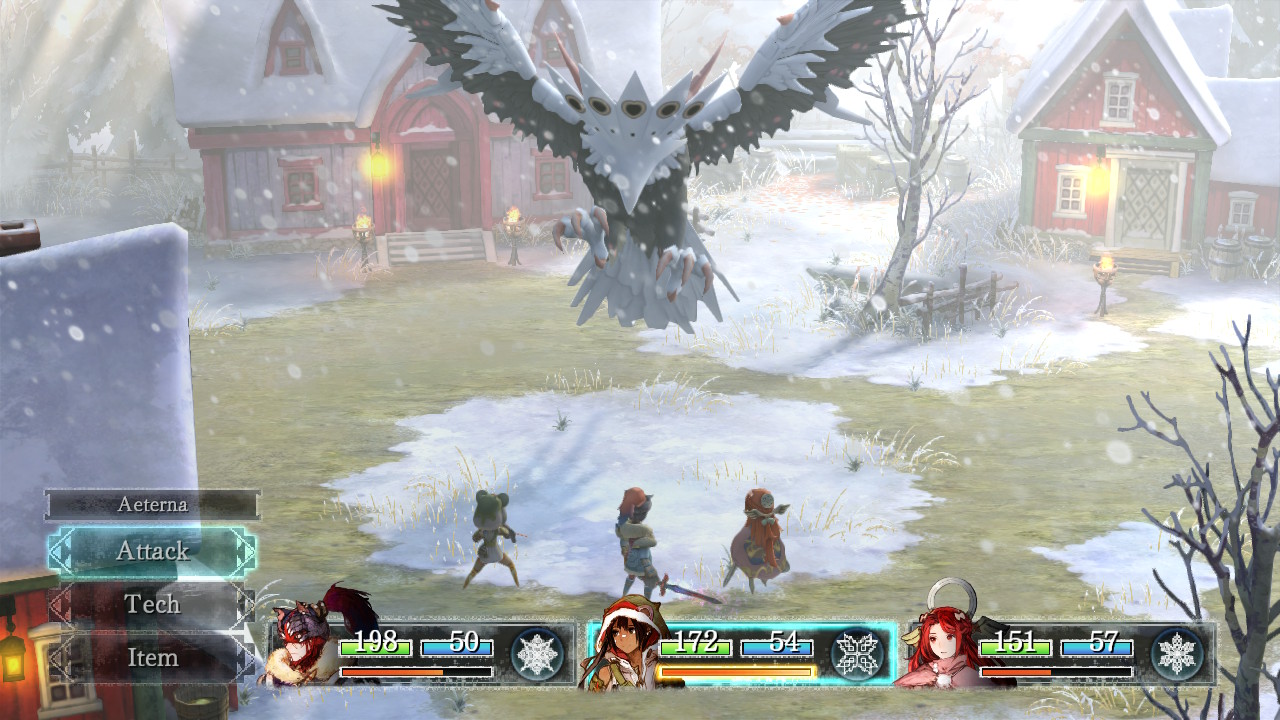 When it comes to combat you have a few different options to make use of. There’s melee combat, making use of inventory items, or a tech option; the latter allowing each of your characters to carry out more powerful attacks, or alternatively cast healing, attacking, or defensive boosts which benefit the whole party. Tech is an essential part of combat and you won’t defeat powerful enemies without it, so making sure you have the correct combination of attack, healing, and defense between your party members becomes the most important part of the game.

Another combat feature which comes into play is momentum. As you fight your momentum gauge will fill up, and once full it can then be triggered at the beginning of an attack. Once active, Momentum gives you random benefits such as dealing multiple versions of the attack, recovering health, or dealing critical damage. Any of these benefits could easily turn the tide of the battle in your favour. 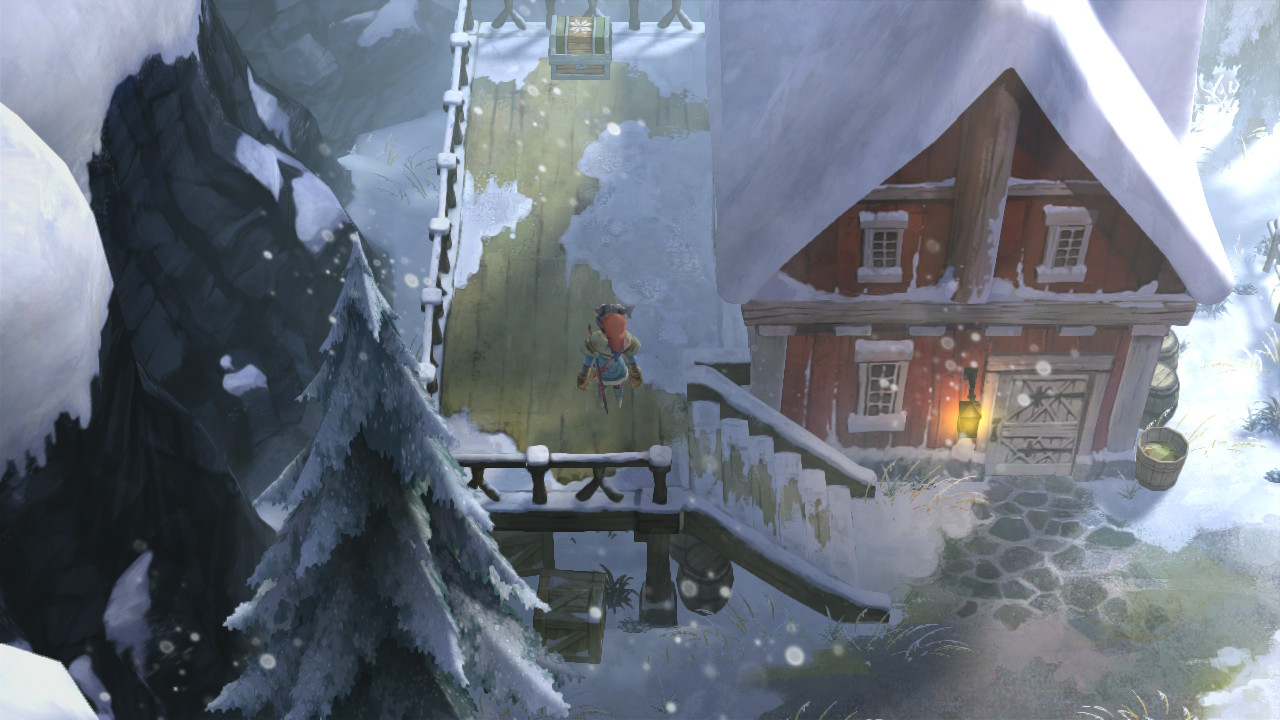 You’ll spend plenty of time in I Am Setsuna encountering all manner of enemies; some similar to the last, and some new. While this could be considered repetitive, defeating these creatures serves the purpose of gaining your party experience, which in turn makes them all the more powerful for the epic key encounters. Failure there will see you restarting the game, cursing your luck for sneaking past the last set of monsters, and missing out on the little bit of experience which might have made all the difference.

Outside of the combat, I Am Setsuna offers something a little different in that it splits into two sections. The first is in a world, where you’ll wander through woods and mountains – encountering random enemies and finding collectibles. You’ll also visit villages and meet NPC’s to trade for new equipment and tech, or to progress the story. While you’ll spend a decent amount of time in these areas, getting to know the residents and gaining some much-needed background information on the world around you, sadly the story hardly feels very fleshed out. As suck, you’re not likely to gain much sympathy for the plight of the land… although you may certainly appreciate the work which has gone into creating it. 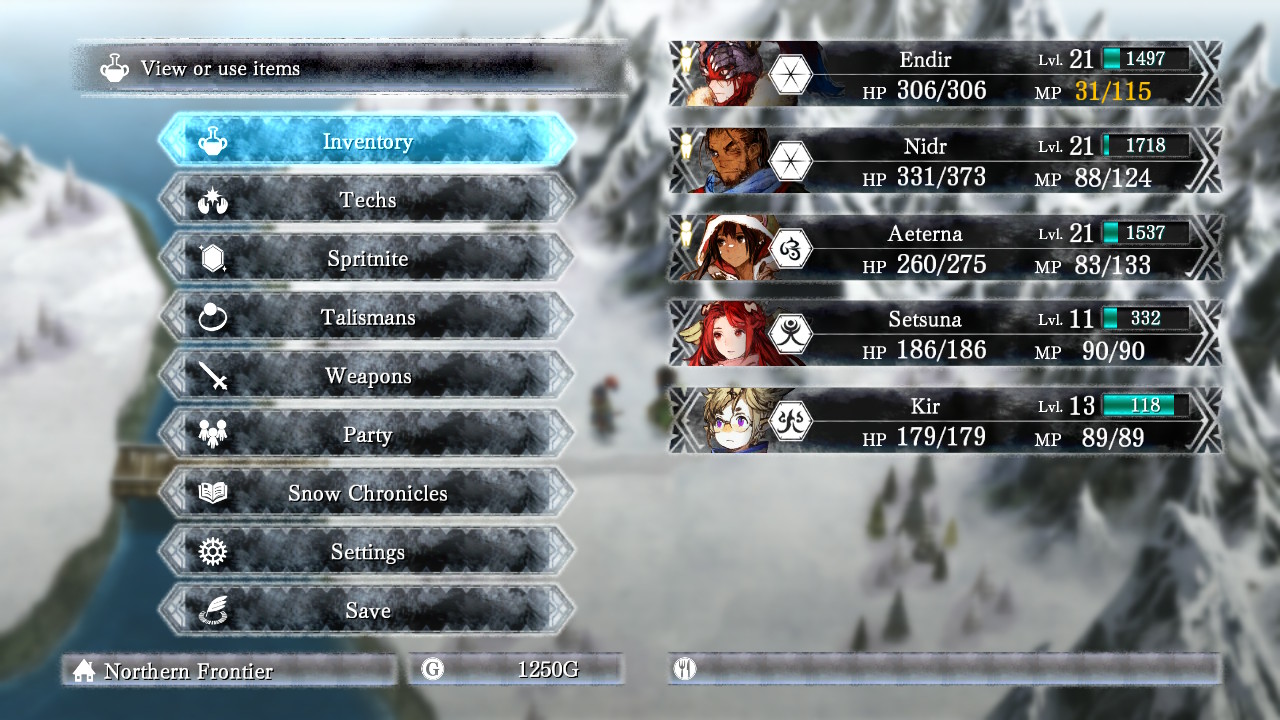 The other section of the game takes the guise of an over-world view. It’s here you’ll traverse between areas as often as you like, exploring each path and (crucially) taking the opportunity to save your game. There is no auto-save feature here; a lesson I was taught after playing for two hours, only to lose all my progress and have to start again.

Other than giving you the opportunity to save your game, the over world map also allows you to chance to see shiny objects clearer. Generally, these collectibles consist of ingredients which can be gathered to help provide boosts to your health – something which comes in especially handy during battles. Due to the map being so snowy, these collectibles are often very hard to spot. The only hint is an occasional glimmering, which means they are much more easy to see if you are standing still.

Of course, standing still for shiny objects offers yet another excuse to slow down the pace and take in some of the fantastic sights. There are snow-blanketed forests with rivers running through them, and even snow covered mountains – which you just know will be full of hard to defeat enemies.

No matter which area of I Am Setsuna you frequent however, the developer seems to have struck the right balance between art and music. The graphics often seem like they have been painted on the screen, while the music feels comforting and safe in its nature; almost reassuring you that no monsters are about to jump out and surprise you. When you’re in action however, there are some dramatic changes. There’s a faster and more urgent pace to the music, and you genuinely feel inclined to take care of the enemy before it takes care of you. Things change graphically too, thanks to the screen lighting up with every hit and spell cast. 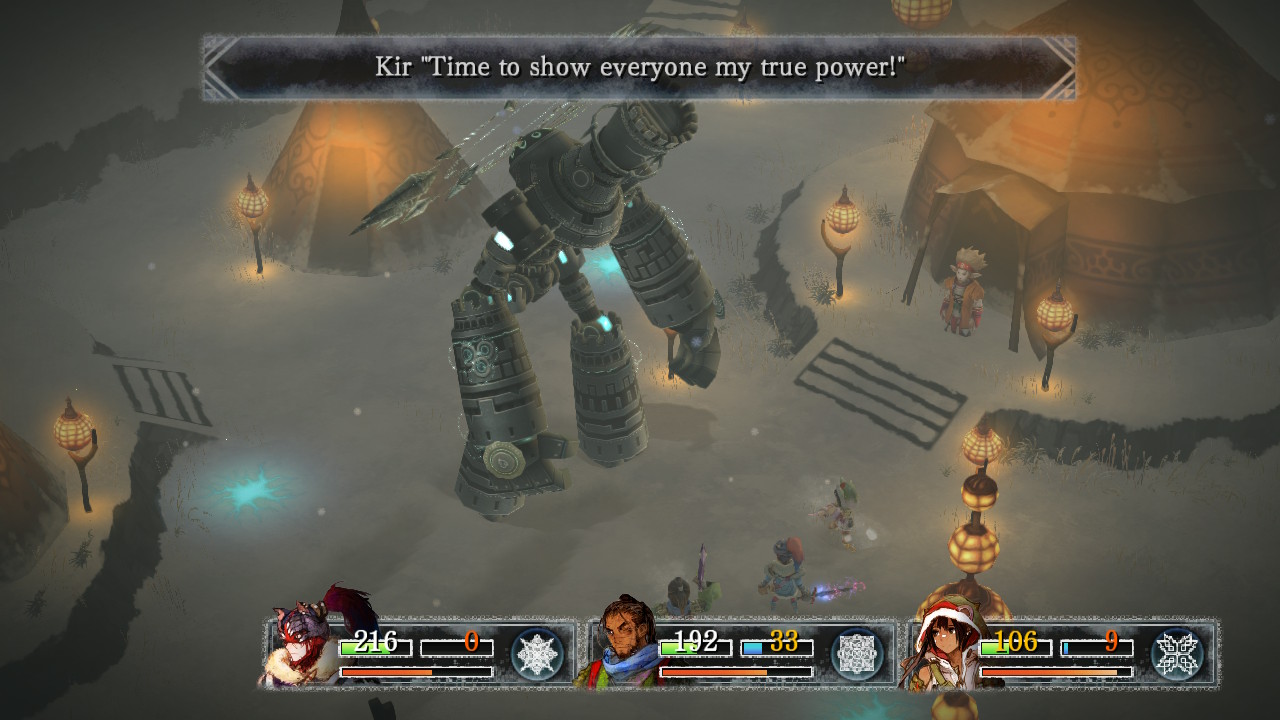 As we move past the parts of the whole, I must take the time to note that I Am Setsuna is a game which feels as if it were made with Nintendo Switch in mind. Nearly all of my time has been spent playing in handheld mode, and in my opinion the game seems to suit the system perfectly there. There’s something about the graphics and soothing classical music which lose a little sparkle when transferred to a bigger screen, however – although no matter which way you play, it’s hard not to be impressed with the colourful – yet subtle – art style. Not many games look just as good in motion as they do when standing still, but this is certainly one of them.

Yes, it’s true that there’s a lot to love about I Am Setsuna – and while the story could perhaps have offered more, the combination of presentation, a deep combat system and other classic JRPG elements will certainly keep you satisfied. Plus, even if your not the biggest fan of the genre, the easy-going nature of this game could mean it’ll still be one to draw you in. It’s just that enjoyable.

Reviewed using a copy of I Am Setsuna provided by Square Enix.

I am Setsuna is an enjoyable and more than competent JRPG, which while weak in story more than makes up for this with a strong combat system and fantastic presentation.

0 thoughts on “I Am Setsuna Review”