I’ve always wanted to go fast; I’m talking so fast you’re reading your speed in Mach numbers. With Fast RMX you can do something quite close to that, and man does it ever look good while it’s happening

With speeds approaching 700 miles per hour (the speed of sound – Mach – is ~768mph in Earth’s lower atmosphere) without the use of boost, this is one hell of a fast paced racing game. It features fifteen racing pods to choose from, thirty tracks to speed around on, two single player modes, three multiplayer options, and a partridge in a pear tree. This is a game with some quality options – and being that the single player bits also come in three difficulties, it also gets harder the further you get.

Before we get into how everything works however, first you’ll need to know about what you’re racing with. The vehicles in this game seem to be maglev (magnetic levitation) enabled racing pods with jet engines; each pod given ratings in acceleration, top speed, and boost categories. At the beginning you’ve only got a few options to choose from, but they grow as you complete championships with a podium finish – opening up options that will cover the entire scale from each balance angle. There is no ultimate pod here however, so don’t think that because you’re unlocking more options you’ll eventually end up with a hideously unbalanced game. This is a racer with fair options for everyone, and that’s a significant part of what makes it good. 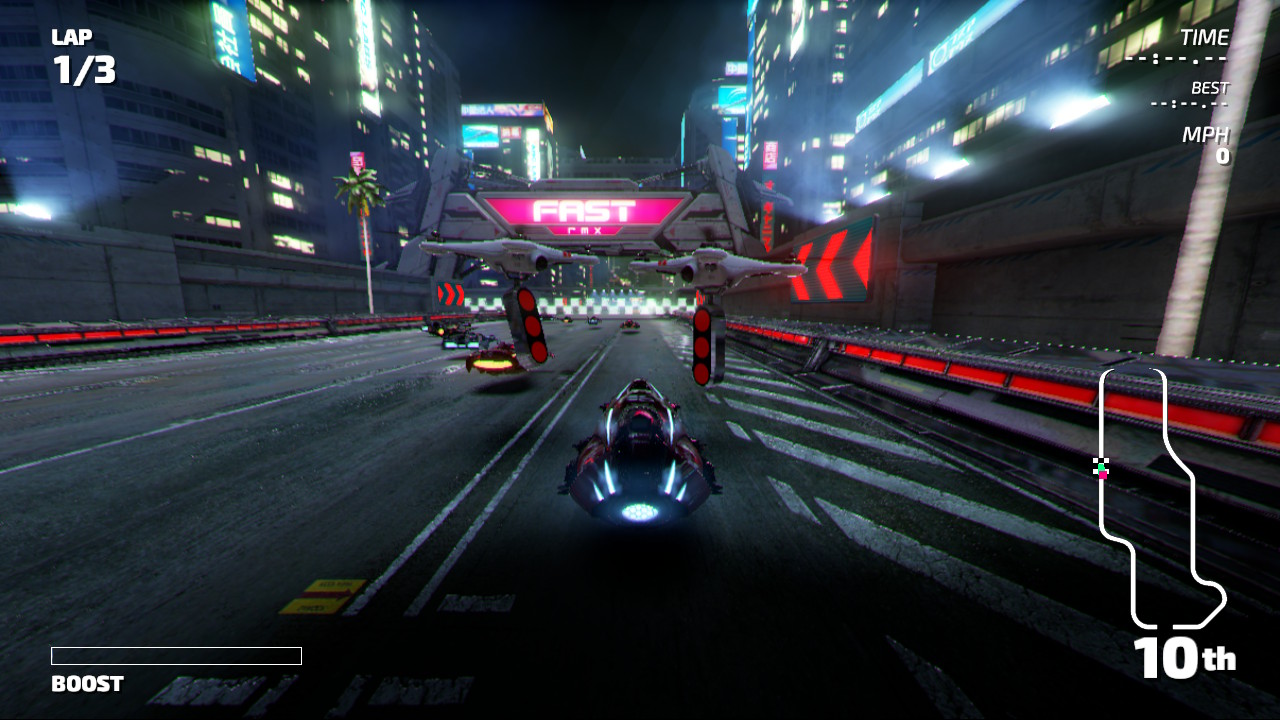 Next, you’ll want to know how you’re racing – and that too is a bit different than what you might be familiar with. In Fast RMX you’ll be racing the aforementioned pods at speeds of around 600 to 800 miles per hour, magnetically levitating above a unique rollercoaster-like course. Of course, like other racers you’ll still compete with seven other racers, trying to be the first person to cross the finish line after three laps. It’s a mix of futuristic flair and what you know… but it’s also a little more complicated than just “petal to the metal” racing.

During the course of any race you’ll mostly be propelled by your own fuel, however by matching one of two possible phases (orange or blue) with the glowing phase strips placed along the course you’ll be able to get free boosts. Switching phases can be done with the X button, and it’s a quick and smooth process – so take advantage, and be sure not to collide with a strip using the wrong phase (as you’ll be slowed down instead).

Additionally, you can get boost by filling a boost meter; the fuel for this user-controlled boost coming from the collection of orbs placed around each course. Boosting will increase your acceleration, and can even push your top speed to crazy heights if used right; it’s an important part of your arsenal, so learn how to use it!

Lastly – with regards to how to race anyways – it’s important to note that while there are no weapons in the game, there is the ability to knock your opponent into a spin using the power of speed. Boosting into a slower opponent will cause them to spin out, while dealing no real effect to you as the faster party. As such, the lesson soon becomes to be aggressive, or at least to try and be aggressive when you can.

Moving onto the courses themselves, as I said before they’re littered with phase strips and boost orbs, and designed sort of like roller coasters. The one difference here is that while roller coasters must worry about losing the passengers, in Fast RMX you’re strapped in a pod and maglev-ed to the track… so you can do some crazy things. Most courses include track transfers – where you jump between pieces of track, multiple paths – where you can take a different route with different obstacles, and crazy twists – where you take to the track in a way that you’d never manage in a car. Other courses up the ante with cylinder-like tracks, weather effects (like rain or wind), phase-based jumps, moving obstacles, and more. The courses have tons of differentiation, and it makes them all very unique and fun to play.

Finally, there’s the modes – which there are few of at launch, but they’re all very good. Champion Mode and Hero Mode are for single player play; while splitscreen, online communication, and local communication are for multiplayer play. They all offer something different in their makeup, so to truly understand what the game has to offer you need to understand the difference in gameplay modes.

Champion Mode is the standard single player racing mode, and has you completing three races which each earn points towards a final score. If your final score makes the top three, then you’ve done good enough to earn the rewards from beating the level (which may include new pods and always include new championships) – and once you’ve unlocked all the levels in one difficulty you’ll open the next. It’s a simple system, and it works.

The other single player mode is called Hero Mode, and has you start the race with full boost – which also acts as your shield. Your goal is to get first place (and to make it to the finish in the first place) by using that boost wisely; emptying the bar will mean a game over, as will crashing. This is the hardest single player mode, and just like Champion Mode you need to progress through the levels in order to unlock the harder difficulties. That said, it’s also the best way to get good… aside from multiplayer.

Multplayer modes come in three varieties; two-to-four player splitscreen, online communication, and local communication (system link). The first and last of these modes deal with offline play and multiple local players, while the other mode is of course online only.

Splitscreen (on-system) gameplay is suitable for between two and four players only. You can use a single Joy-Con to play, so you should have everything you need for at least two players right out of the box – something you should most definitely take advantage of. I found that with a very small bit of practice I could play just as well with a single Joy-Con controller as I can with the other Joy-Con based control methods, and I’m sure you’ll find this to be true for you as well – at least for this game. Additionally, splitscreen multiplayer is a bit more customizeable than single or online multiplayer, and offers modes spanning from head-to-head single track to CPU aided full-size championship. Splitscreen is your game to set up as you will, so you should be sure to take advantage of the options when some friends are down for some fun.

Online communication however, requires an internet connection. That taken care of, it will connect you with up to seven other players for some all out gameplay. Online players will choose the next course to race on via a quick vote, and races will earn you points (which show off your prowess). It’s a simple and effective system, and I had no problem finding a game at almost any time of day – though I’d like to note that at launch the game doesn’t include the ability to play with online friends. This is definitely a bit of an annoyance for some, however it’s being patched in via the title’s first post-launch update, and will soon be a moot point.

As for local communication (system link), it has up to eight switches link up for local play that is said to work very much like splitscreen. I didn’t get a chance to test it as I don’t know anyone personally with a Switch, but it’s there for you as an option and I hear it works. That’s good news if you’ve got a lot of Switch-bearing gamer friends in real life (unlike yours truly at this point).

So that’s what it lays out as, but how does it run – right? Well it runs quite well. Gameplay always looks smooth and clear, with what I’ve been told is dynamic resolution going on to keep things running well in the frame rate department. There are very few times when this is noticeable, and overall the graphics look quite amazing for the system. Basically, Fast RMX offers quite a fair bit of graphical “wow” in its sub-900MB package, and it does so without too many compromises. The audio follows suit in step, and brings the whole package together with some believable sounds and quality background music. Not once did I think that a track or sound was intrusive to the gameplay, and the music was often a good way to get into the tension of the race. While none of it is particularly memorable in any way, it’s not a bad set of inclusions at all.

Controls are no different, and there’s both a full set of options to swap them around as well as plenty of options to play. Fast RMX is compatible with portable, tabletop, and TV modes – and can use either a single or both Joy-Cons, or the Pro controller for gameplay. It’s simple to pick up and play, and the single Joy-Con option isn’t crippled like it could be with games that have more actions. It’s kind of the perfect meld of all options, and that’s saying something as it’s one of the first games to offer them.

As this review winds to a close, you might have noticed that I’ve got a lot of good things to say about Fast RMX. It’s a racer that has tons of different play options, does well to include everyone who wants to play, and ends up doing a bang up job at everything it attempts. I would’ve liked a straight up single player practice mode (unlimited laps) available out of the gate, but for what it offers I can’t complain one bit; Fast RMX is one hell of a solid game, and it offers features and options that make it a perfect fit for your first digital buy.

So what are you waiting for? Pod racers, start your engines!

Fast RMX is a blistering fast racer with a very balanced set of vehicles and a nice selection of tracks. It’s perfect for some single player score chasing or some multiplayer competition, and it looks great while doing it – though it could’ve used a few more options here and there. That doesn’t really hinder what we’ve been offered however, and Fast RMX is a racing game I’m happy to recommend to absolutely anyone who might be looking for one. It’s just that good!