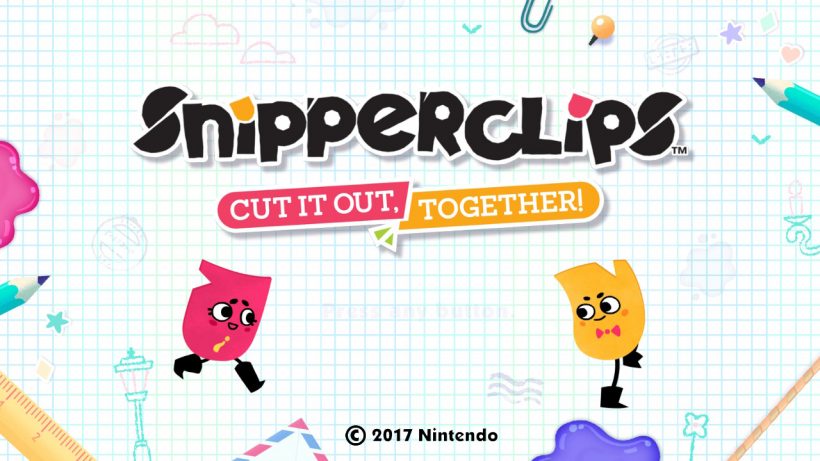 A cut above the rest!

If 1-2 Switch was designed to show off and demo the marvellous technology within the Nintendo Switch’s Joy-Con controllers, then Snipperclips – Cut it out, together! is almost certainly the game designed to showcase the new console’s multiplayer functionality. The premise is simple; you and up to three friends each take control of a paper-craft character, and then you cut each other into whatever shapes you see fit in order to solve the various puzzles the game throws your way.

The cutting mechanic in Snipperclips works really well. By moving one of the characters – Snip and Clip – over the other you will see an outline showing what the outcome of any ‘snip’ will be. Once you are happy with what the result will be, a tap of the A button will cut your fellow paper-craft friend a new one – so to speak. Don’t worry if you get it wrong though, as this game is all about experimentation; if you need to reset your character back to normal you can simply hold Y until they pop back into shape, or you can even toggle between the last two shapes used by tapping the Y button. The game really is that forgiving!

The difficult part, and arguably the part that makes Snipperclips so much fun, is that you are left to your own devices to figure out how best to solve each of the game’s 45+ levels. The game’s opening tutorial and the name of each level are the only hints that you will get to assist you along your way to success, so make sure to pay attention to them. 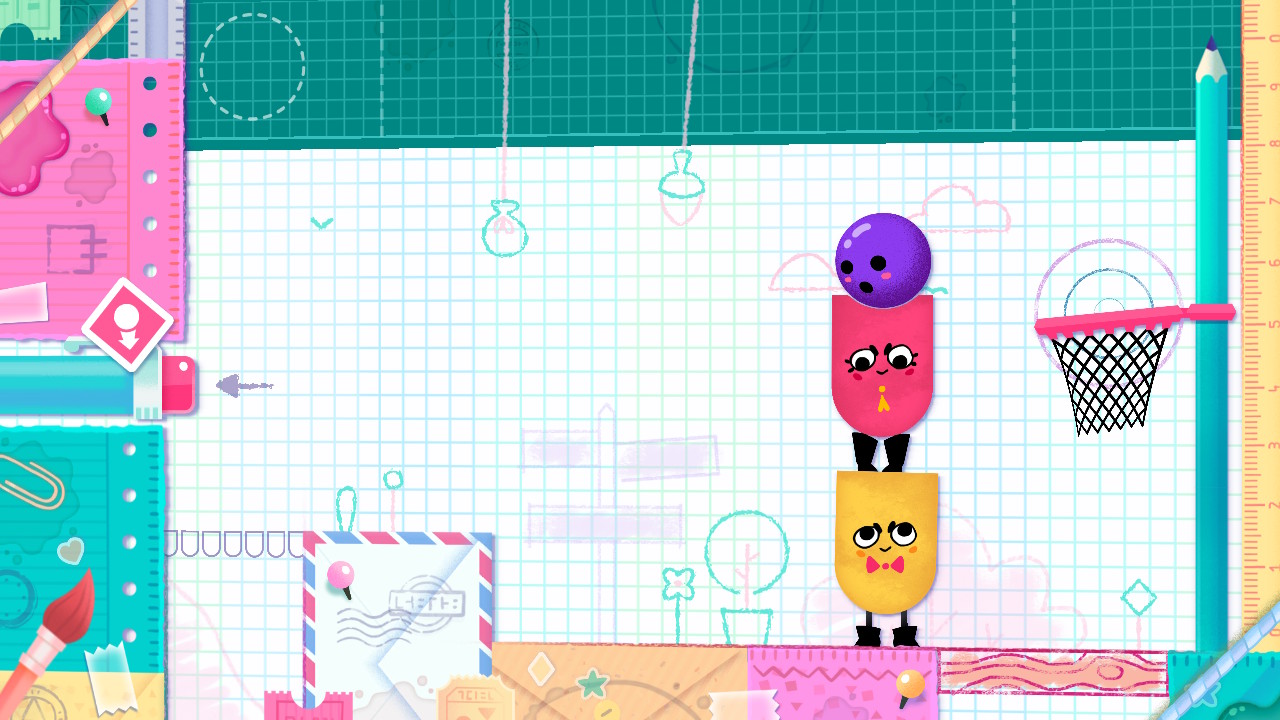 That said, it is quite refreshing to be left to your own devices to solve these puzzles, as it means that you are left to experiment – which almost certainly means that hilarity and friendly arguments will ensue as players discuss and attempt the puzzles thrown at them. You will soon learn that there is no correct way to complete a level, so you can be as creative as you like.

I found during multiple plays of some of the stages with various friends that different people have different ideas of how to get to the end goal. One example was with a stage where you have to get a basketball from one end of the screen and score a basket with it at the other end of the screen. The first time it was played the two characters were used together to roll the ball across the top of each other’s bodies to form a path to the target. The second time ’round however, a bowl shape was cut into one character to allow the basketball to sit perfectly still – allowing for the ball to be simply walked from one end of the screen to the other. The beauty of this game is that there will be many other players who have found other ways to complete the same goal. It really does draw on your creativity, making you use your initiative and play with the game’s simple mechanics to get inventive.

Snipperclips utilises all three of the Nintendo Switch’s play styles, so if you are worried about it being multiplayer only then fear not! There are three worlds – each filled with fifteen stages – that are designed to be played through using two characters, and these can either be played solo (which also works in handheld mode) or with a friend via TV or Table Top mode. It works just as well in handheld mode as it does in single Joy-Con multiplayer; you have options here, so use them.

Although not as fun as playing with a partner, flying solo in Snipperclips is still good fun. You can switch between the two characters with a simple tap of the X button, although it certainly does make some of the stages a bit more difficult. There was one stage in particular I found rather annoying where you had to use both characters at the same time, and having to switch between them constantly made it a hell of a lot more difficult then it would have been if there would have been a second player lending a hand.

There are some great levels amongst the forty five as well. “Princess Power-up” – for example – has you create a safe path for a princess, avoiding obstacles to collect diamonds and then moving her using an in-game joystick. It’s a particular highlight. That said, it won’t take you long to get through them all once you have figured out a solution to each type of puzzle – and it’s perfectly possible to complete all the stages in one sitting if you were determined enough!

There is more to the game than these forty-five stages however, with an additional fifteen levels designed for party play with two to four players. These levels are more of the same, but use four characters rather than two, and really will test your co-operation and communication skills. Another welcome addition are the three “Blitz” (competitive) modes available, so if you do find that the tension between friends is getting too much you can take it out on each other here. You can choose from either Hoops – a basketball game where you have to score in your opponents basket, Hockey – think air-hockey with your character as the paddle, or Dojo – where you win by cutting your opponent into oblivion. Although Hoops isn’t that great and you tend to lose the ball off the sides more often than you can score points, Dojo and Hockey are both really good fun. I only tried these modes out with one friend, but I can imagine Dojo would be chaos with three or four players (and a great way to settle any arguments caused by the co-operative levels). 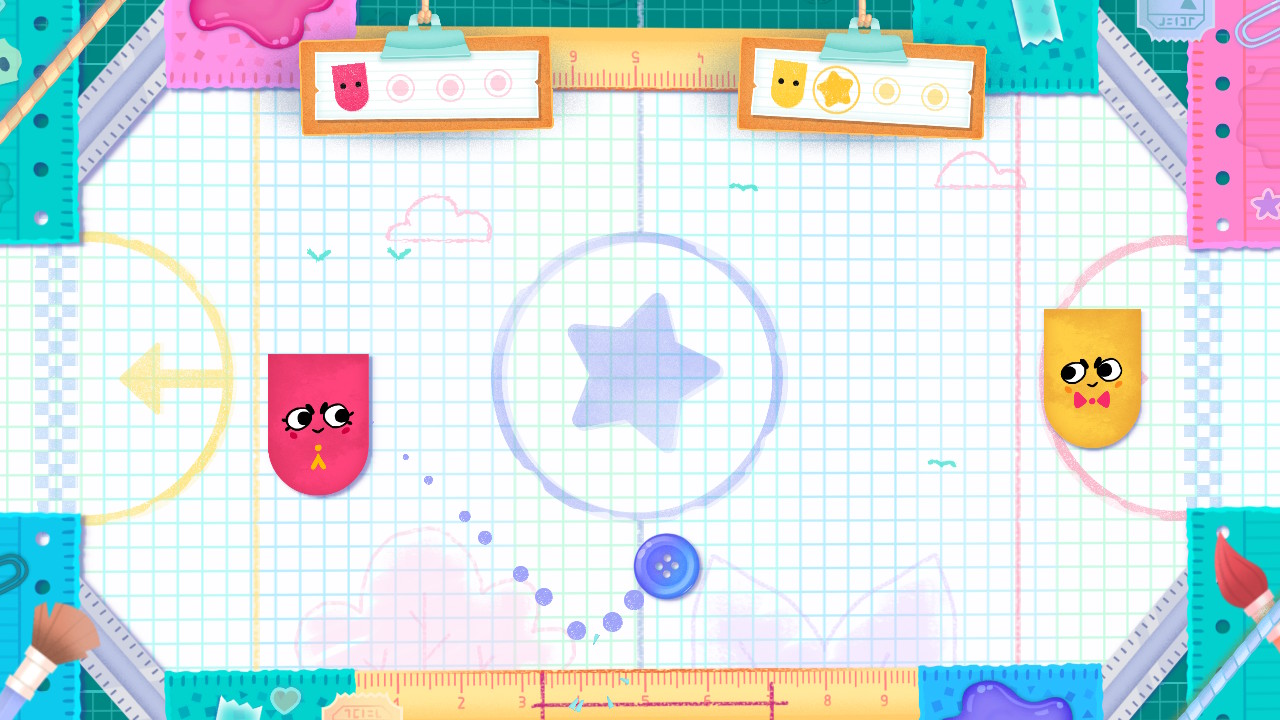 To say the game has a certain charm about it would be an understatement. As you can see from the screens above, the game has a nice, paper-craft aesthetic to it – with the levels looking like they have all been drawn out on paper and the characters cut out and placed on top. The game’s soundtrack is also very catchy, with inoffensive tunes that repeat and loop until you find yourself humming along to them while playing.

Another thing that adds to the overall feel of the game is the personification of the paper characters that you take control of. It is often hilarious watching their little faces recoil in horror as you chop chunks out of them, or watch the expression of pain and struggle on them as you balance a heavy bowling ball on their bodies. It goes a long way to show that attention to detail (and a lot of care) has gone into making Snipperclips, and that attention is much appreciated.

Snipperclips is definitely worthy of a purchase, especially if you are looking for a game to play with friends! Although there probably isn’t much in the form of replay value (Blitz mode aside), you will certainly get your money’s worth with all the fun you will have trying to complete each of the stages whilst trying to remain calm. Whether you are planning on cutting your way through it solo or cutting it out together, Snipperclips is a game that gets the seal of approval from me!

Snipperclips - Cut it out, together!

0 thoughts on “Snipperclips – Cut it out, together! Review”