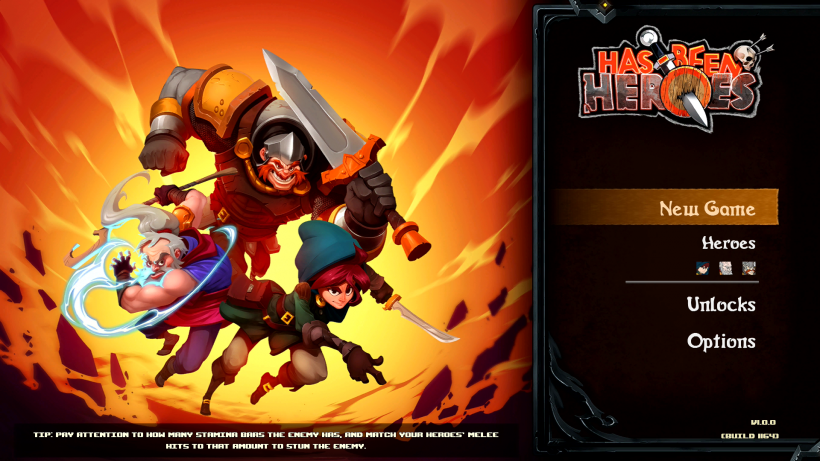 You get the feeling that someone at Frozenbyte kept adding notes to the design doc for Has-Been Heroes. “Harder”, they would say. Then later on, “Can we make it harder?” it would repeat, just in case the first request was somehow missed. The roguelike genre is no stranger to difficult games, but the key to making one successful is balance.

It goes back to the old fashioned saying “carrot on the stick”, where you are asking a donkey to work, and it does so blindly because, in its mind at least, if it keeps going it will grab that elusive carrot. Here, though, you realise quickly that the carrot is never coming, and the stick is just one being used to beat you into submission, with repeated swipes across your bottom.. 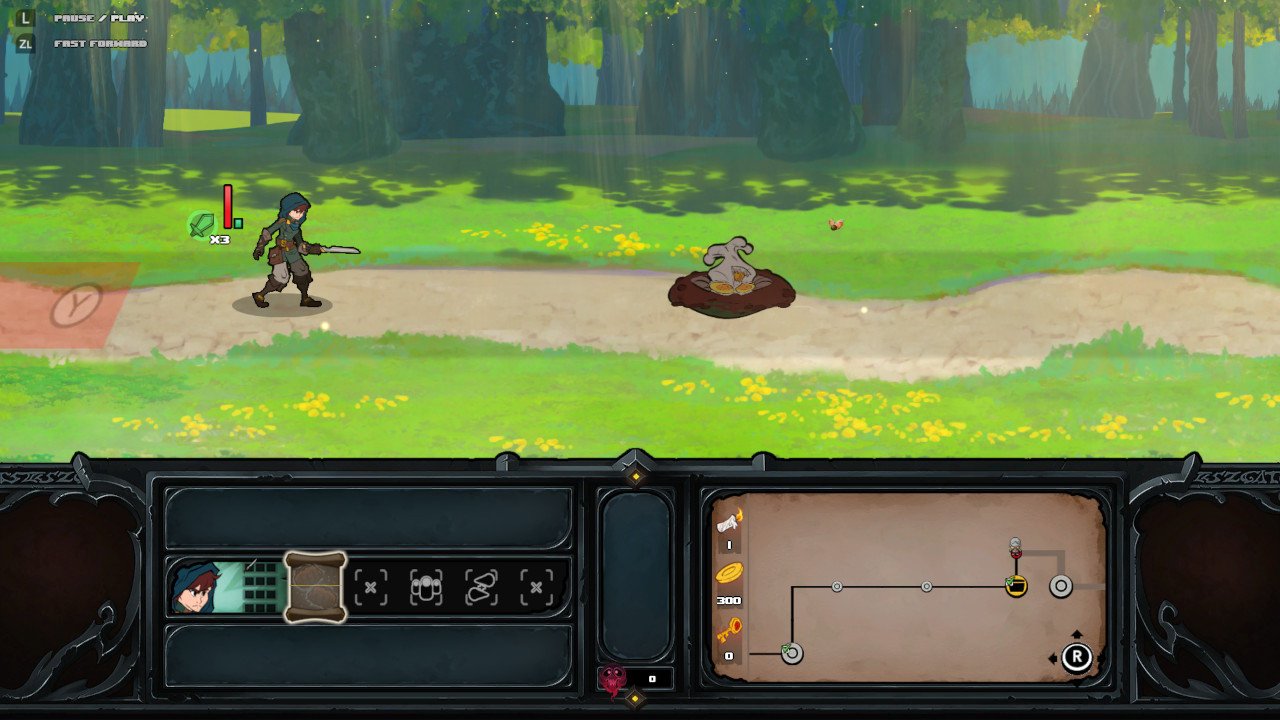 And it’s a great shame, actually, because an attempt to switch things up (pun not intended but gratefully taken) has been made. The tried and tested “escort the princess” is exactly the case here, only instead of saving them (there’s two princesses) from the big bad, it’s your job as “has-been heroes” to escort them safely to school.

You’re expendable, and the roguelike elements come into play almost immediately. Dying will reset progress, and everything you’ve gained bar gold will be gone. There are lots of heroes to unlock, but you’ll only see the first three for hours upon end due to that insanely high difficulty level. There’s an “unlocks” screen which shows the things you’ve discovered on your many, many journeys, but you can’t reuse them, or equip them, it’s just a case of “oh well, you’ve found these, so at least you’ll understand how they work next time”.

When all’s said and done, this is a lane-based strategy game. Your three heroes (whichever ones you are using) will take up a position in each of the three lanes, whereby a timer will start and enemies will rush you. They won’t stop until the timer runs out, either, and there’s absolutely no let up in the barrage of skeletons, plants, and the like, each requiring a certain tactic to quickly dispatch them. 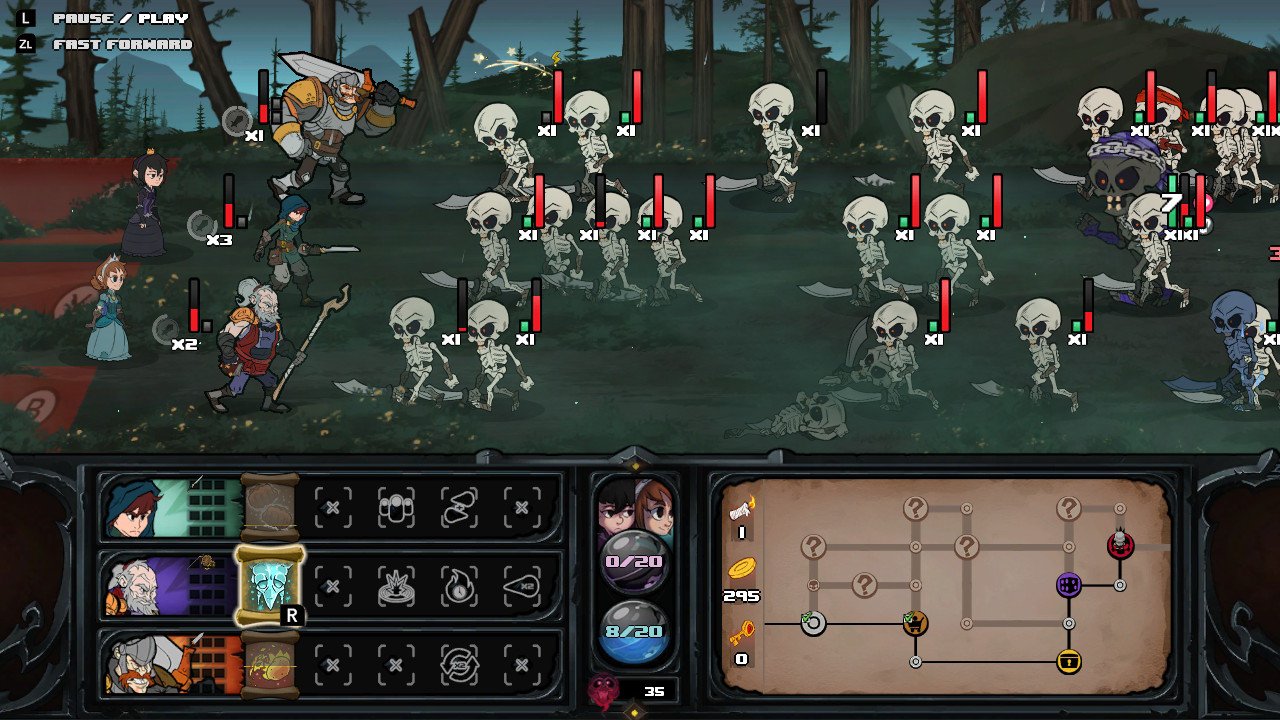 The interesting element here, is that the way you play means you can go on the offensive quite easily. There are scrolls that act as skills: buffs and debuffs. While one of your characters may hit hard but only once, the other might be a quicker (weaker) combatant, who will benefit from using the double-attack buff. Enemies have a stamina bar as well as a health bar, and this acts as a shield of sorts with some foes that you have to break down before actually killing them.

When one of your characters is attacking, you can switch lanes. This allows you to use your three turns wisely and really go to town on your enemies. It’s a decent system, but it breaks down when bosses appear because they can switch lanes and ruin plans. On top of that, they will often have multiple enemies attacking you from all lanes and be absolute tanks when it comes to health bars. You might be doing okay and be on top of things, but eventually the rush of grunts will mean you have to switch focus and it all just falls apart.

Has-Been Heroes doesn’t make particularly great use of the Switch’s hardware, but it is a game that benefits from being played on a handheld device in short bursts. The colourful, bright visuals feel at home on a Nintendo console, but people who play on multiple other devices will take time to adjust to the face buttons being so different, and being so important. Each button controls a lane, or character on the lane, and while you can pause the action with a tap of L, you may need to rewire your brain a little to begin with. Each area (forest, ice, you get the idea) has a small mini-map and you can take whichever path you prefer. There are vendors and battles on the way to the boss, and if you want to go backwards it’ll cost you a “candle” to do so. But again, due to the random nature of… well, everything, you may well be tempted to mainline a route to the boss, because you can’t be sure what you get along the way is going to help you anyway. That said, it’s hard to imagine anyone beating a boss without some additional magic, or equipment gathered along the way.

For all the unique, fun ideas, Has-Been Heroes is let down by its brutal difficulty. If you’re going to make a game this hard, you really ought to also make your protagonists a little more durable, and potential success less down to luck. There are battles that require you to perform almost perfectly to achieve success, and after a while, the constant failure with little or no reason to come back grates on you.

It’s a terrific shame, because Frozenbyte has shown it is willing to try different things, from platformers (Trine) to stealth (Shadwen), and now a roguelike turn-based strategy game, but Has-Been Heroes quickly becomes a chore to play , and doesn’t give anywhere near enough reward. It’s not terrible, but the difficulty makes even bite sized chunks lose their lustre. Here’s hoping we get a Rogue Legacy or Spelunky port on Switch to satiate our rogue-like desires.

Has-Been Heroes includes good ideas but is let down by an insanely high difficulty level and a lack of reward. You’ll enjoy it in bite sized chunks via handheld mode to begin with, but you’ll quickly grow tired of feeling like you’re making no progress.