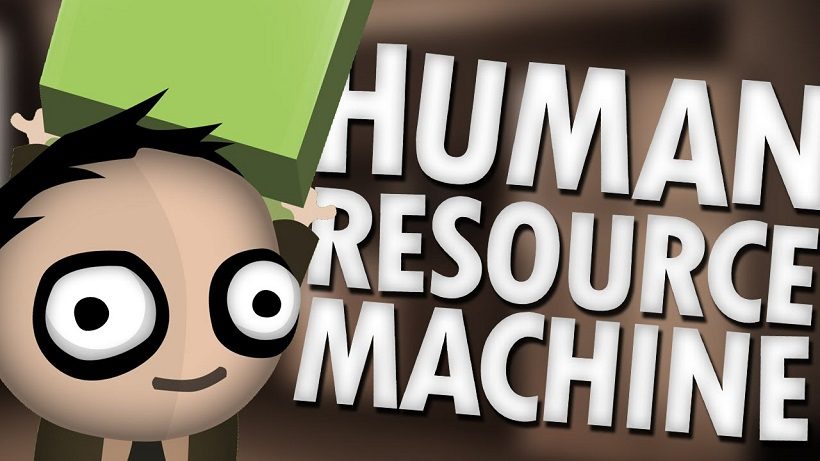 If this was a real job I’d have been fired by now!

Human Resource Machine is a game that makes you work, and quite literally at that! Upon starting the game you are asked to create your Employee ID by giving your avatar a name and defining their appearance, and before long you’re sending them off to start them on their path to climb the corporate ladder.

The ladder – in this instance – is in fact an elevator. Each floor that you climb represents one year of your avatars tenure; so you’ll start off as a fresh faced employee on the ground floor, and make your way to the top of the tower as you approach your senior years in the business.

Not only does the game make your character work for his reward however, but you (the player) will also be put to the test as this puzzler attempts to teach you basic visual programming. The office your character spends their days in is unlike any I have ever worked in, and each room has two conveyor belts; one that brings numbered tiles in, and one that takes them out. Your job is to take the numbers from the ‘in’ conveyor and place them in the ‘out’. 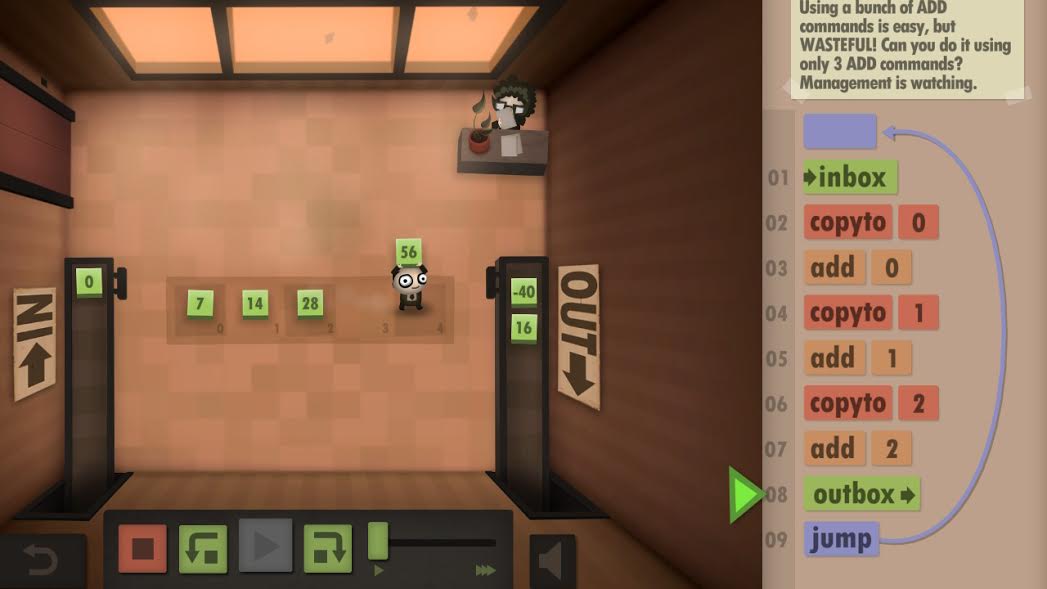 Sounds pretty simple right? Well, it is – but not for long!

The first few levels in the game task you with simple requests, such as move all the items from the inbox and place them into the outbox. This can be done with a few simple commands; with something like “Inbox,” ”Outbox,” and ”Jump to start” sending your avatar to the inbox to pick up a tile, having them take the item to the outbox, and then looping this pattern until all items are moved. Playing through these early levels will start to feel pretty good, almost like you’re on your way to becoming a coding master. Watch out CEO, this worker is coming for your job!

Then, as happens to a lot of people in office jobs, your head will hit the proverbial glass ceiling. You’ll get to a floor in the game where you have absolutely no idea how to accomplish what is being requested of you, and that CEO position you were gunning for fades into a distant memory. Before long, you’re eyeing up your boss and wondering if it would be frowned upon if you were to ‘accidentally’ push them out of the window in order to stop them from getting on your back every time you make a mistake (which is a regular thing). This happened to me around floor eighteen, and there are around forty of them to get through, so be warned that you will be scratching your head and pulling your hair out for around half of the game if you are anything like me!

A big portion of the difficulty problem seems to be that even though the game drip feeds you new commands to add to your tool set, it doesn’t do a good job of explaining how to use them to their full potential. There are commands that allow you to copy a number from the conveyor belt to a ‘memory’ space on the floor, add or remove a digit from the tile you are currently holding or have stored to memory, add two numbered tiles together, and jump forward or backward to a specific command in your line of code (depending on meeting predefined criteria). The main uses of these commands are quite self-explanatory, but when you start a level and are asked to multiply a number by 40 without a multiply command… you really start to question whether you are the right person for the job.

I guess if you are a master programmer already, or are really good with these types of logic puzzles, you will probably get a kick out of Human Resource Machine. Each level even has additional completion challenges that task you with completing it using ‘less than x commands’ or in ‘less than x steps’ – obviously designed for the truly skilled. If you are not skilled however, you may find this a little too difficult once you get past the first ten levels or so.

Additionally, the story itself is rather nondescript, and you need to prove that you are efficient at your job as robots are on their way to take over. If I could have it my way, I’d let them have it! That said, a few of the floors that you stop at on your way up the elevator give you a break – opting instead to give you a glimpse of life at the office water cooler, kitchen, or another recreational area. These non-work stops break up the stages nicely, and provide a bit of comic relief from the stress of the regular 9-to-5.

Like previous Tomorrow Corporation titles World of Goo and Little Inferno, Human Resource Machine has a distinguishable aesthetic which has been made a little less colourful here – maybe to highlight the dreariness of working in such a drab environment. The art style is great however, and likewise is the way that they integrate some typical office elements. For example, interacting with the boss on each floor will have him bark instructions and rattle off hints to the current stage – but it will also net you some of the least motivational encouragement you’ll hear on the work-floor! This touch adds to the humour, and while the game can definitely be hard, you will almost certainly crack a smile while playing as well!

One of the things that I did like about the game was the excellent use of the hardware I was playing it on. When playing the game in docked mode, you will use the right Joy-Con as a wand-styled pointer – in similar fashion to the Nintendo Wii’s Motion Plus controllers. The setup of this is really straightforward and simple, and if the tracking does go a little off you can easily centre the reticule with the press of a button. Likewise, in handheld mode the game makes use of the Nintendo Switch’s touchscreen, and allows for you to drag and drop commands into place, or tap on whatever you need to select. Using the Joy-Con like a Wii remote was quite good fun, though I soon found it to be a little lacking on the accuracy side, and swiftly reverted to playing the game exclusively in handheld mode.

Despite my time with it, I found that Human Resource Machine is a hard game to give a verdict on. I woke up early one Saturday morning and found myself sat on the couch researching boolean logic and questioning my life choices – both activities arising simply from playing this game. I would guess that your own enjoyment of Human Resource Machine depends on what you are looking for from a game, but if you are wanting to unwind after a hard days work with something that will be fun and not too taxing… then this isn’t what you’re looking for. That said, if you’re looking for something that will really challenge you and make you work for results, then this is a game that is definitely worth a good look (you sadistic pen-pusher, you).

Human Resource Machine is a game that aims to teach you basic programming. The one thing it fails at is that it forgets to teach – you will soon be tasked with puzzles that seem impossible, making this job-simulator game feel like a real chore. While aesthetically pleasing and certainly charming in an odd way, you will soon be eyeing up a career change!