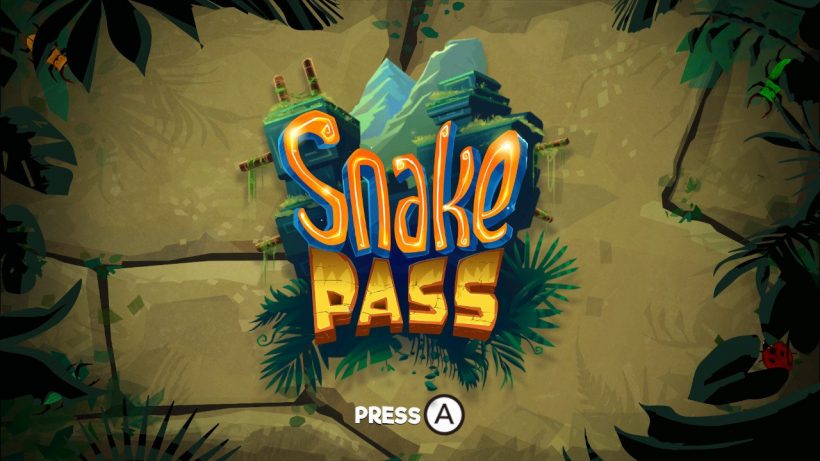 Snakes on a bus. Or a train. Or a plane. Or just docked.

You’d be forgiven for thinking that Snake Pass is a game born in the wrong era. At first glance, it sure looks, sounds and feels like it would not be out of place on your beloved Nintendo 64; nestled amongst the other colourful and vibrant 3D worlds that existed back then. What better console to showcase Snake Pass, then, than Nintendo’s own Switch.

The object of the game is simple; guide your slithery friend to the end of each level, collecting, orbs, coins and – most importantly – the three portal keys on the way. Like any good puzzle game, a simple objective with increasingly difficult level design makes it easy to pick up and play, but very hard to master. Snake Pass is a beautifully vivid game and its colour palette takes you right back to the late 90’s – in a very good way. 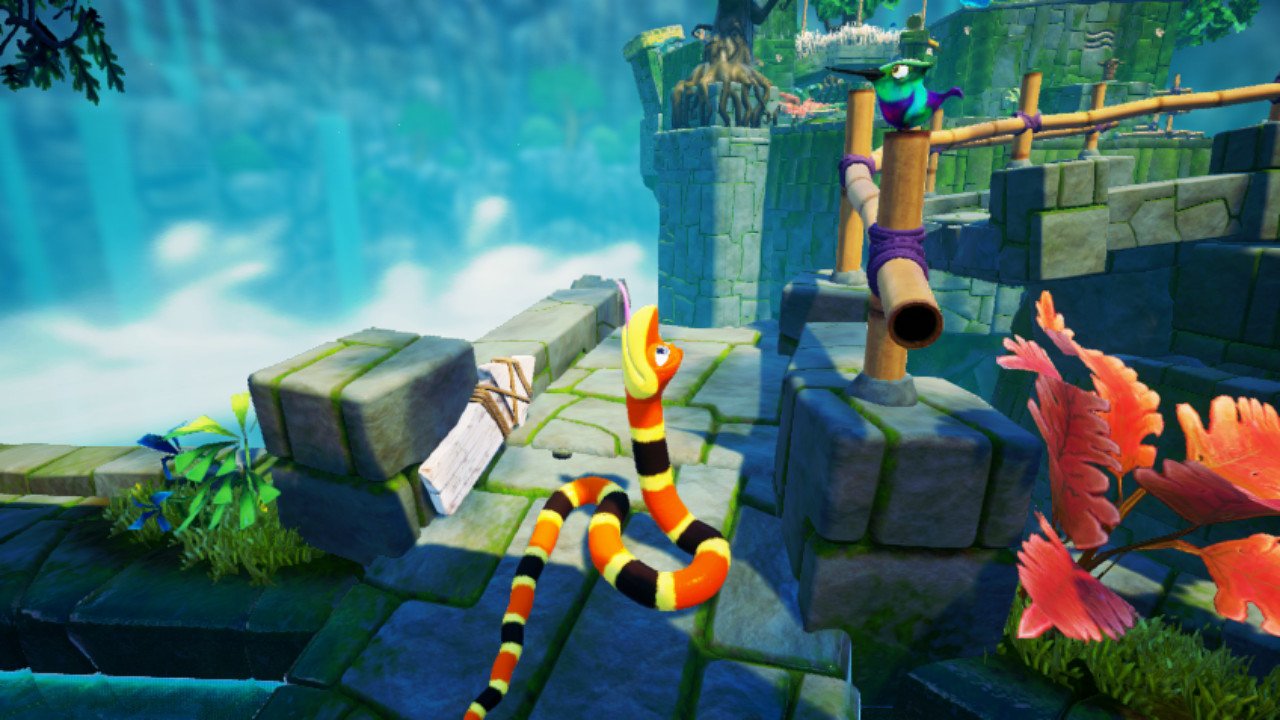 Unlike most platform experiences, in Snake Pass you are not afforded the luxury of a jump button and instead must navigate Noodle (yes, that is really his name) through the courses using your body alone. To move forward, you can’t just push one direction – you must instead hold the right trigger and sliding from side to side. To ascend a ledge or climbing frame you must wrap yourself around it with careful use of the left trigger which alters your grip levels. It’s complicated at first, but after a while it does start to feel like second nature.

The levels themselves are small arenas filled with collectables. Initially, these are easy to come by and require a simple climb here or swim there to get the lot. A few levels in, however, and it isn’t quite so obvious. Luckily, your winged friend, Doodle (I know, I know), flies next to you, giving you hints on the sort of direction you should be heading. A quick press of the Y button also allows Doodle to pick up Noodle’s tail – a very nice helping hand when you need just one more “leg-up” to make it to the top of the ledge you’ve been climbing for the past five minutes.

Level variety comes thick and fast, actually, which is a good thing. Water pools are introduced which allow you to swim freely, diving down and floating to the surface to find hidden orbs, but also allowing you to move from one area of the level to another through the various underwater tunnels.

Levers that you need to wrap yourself around to pull, spheres that need to be pushed into holes – Breath of the Wild-style – and lava pits all ensure that the levels feel different enough to be challenging but not to the point where you’re learning a new mechanic every single time; a consistency which is key for any puzzle platformer to get right.

Unfortunately, it’s not all wonderful. The camera is often troublesome – a problem that, whilst innocent enough and normally easily fixed with a wiggle of the right thumbstick, is a problem that really shouldn’t exist in 2017. Snake Pass is a game where exploring your environment is absolutely critical and so when you’re trying desperately to see what’s on top of that grassy verge with little success, it can become incredibly frustrating. 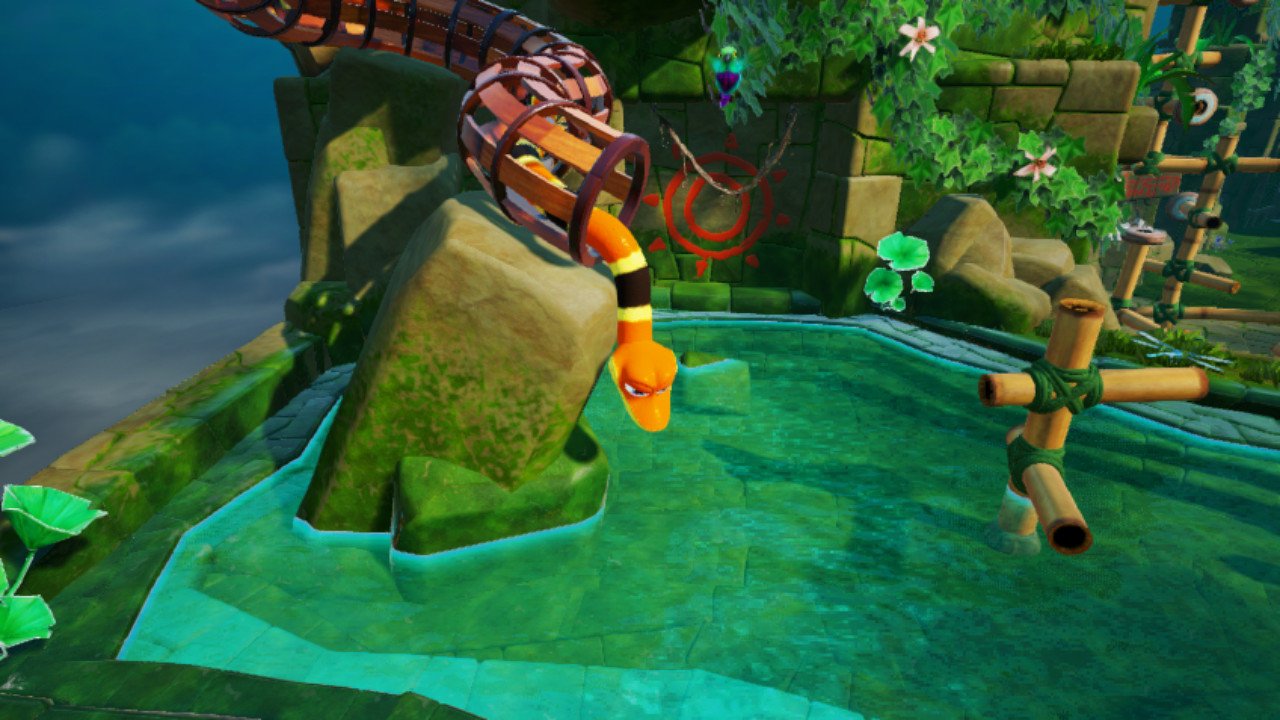 The controls themselves, whilst creative, original and work well most of the time, sometimes just make you feel like you’re waggling sticks and pressing triggers in hope more than skill. As the levels get harder, you’re baited into traversing long climbing frames with little room for error. The checkpoint system compounds your frustrations when deaths are a frequent possibility – losing a huge portion of progress and tricky collectables that were recovered up until that point is a bitter pill to swallow.

Nevertheless, the game is still fun to play. It’s a not a game that you’re likely to have marathon sessions playing, but it also doesn’t need to provide that sort of experience. The most fun I had playing Snake Pass was in between lengthy sessions on Zelda – a colourful palette cleanser, if you will.

There’s a fair bit of content here to get through, and if you’re a completionist, you’ll inevitably want to go back to find every collectible on each stage. Unfortunately, at the time of going to press, the Switch version is the only one not to have the Time Trial mode included – a curious omission and one that would certainly have helped with the lasting appeal of the game.

If you’re going to treat Snake Pass as a pure 3D platform experience to enjoy on your sofa, then I’d argue that there are better alternatives available. But as a pick up and play puzzle platformer for when you’re out and about, it’s hard to recommend not playing it. If you can already feel the nostalgia tugging away inside, it’s worth the experience for that alone.

Snake Pass is a flawed experience – of that there is little doubt. But, for the most part, it’s worth your perseverance. I’d argue that the Switch version is where this game “belongs” the most. Having it available as a handheld experience which you can dip in and out of in short bursts plays right to the strengths of this game and, critically, avoids the frustrations which inevitably build up with any prolonged playtime