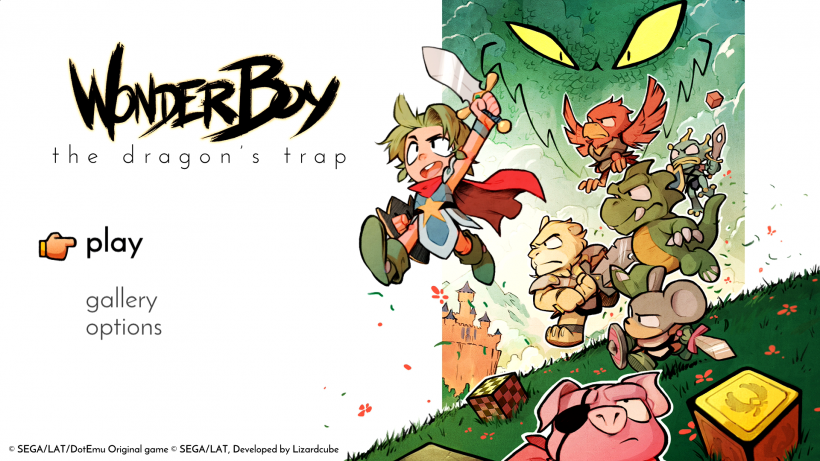 Nostalgia can be a deflating thing. Tracking down that elusive chocolate bar to discover it’s been ruined by a humungous corporation that decided to take an interest in UK chocolate is never good, but it can at least remind us of how far we’ve come.

Thankfully, Wonder Boy is the rare thing from our youth that hasn’t been ruined by age or money: it’s just a lovely thing that has had a shiny coat of paint slapped across it with tender, loving care, and brought to life in a, let’s face it, ridiculously busy time for the game playing populace. 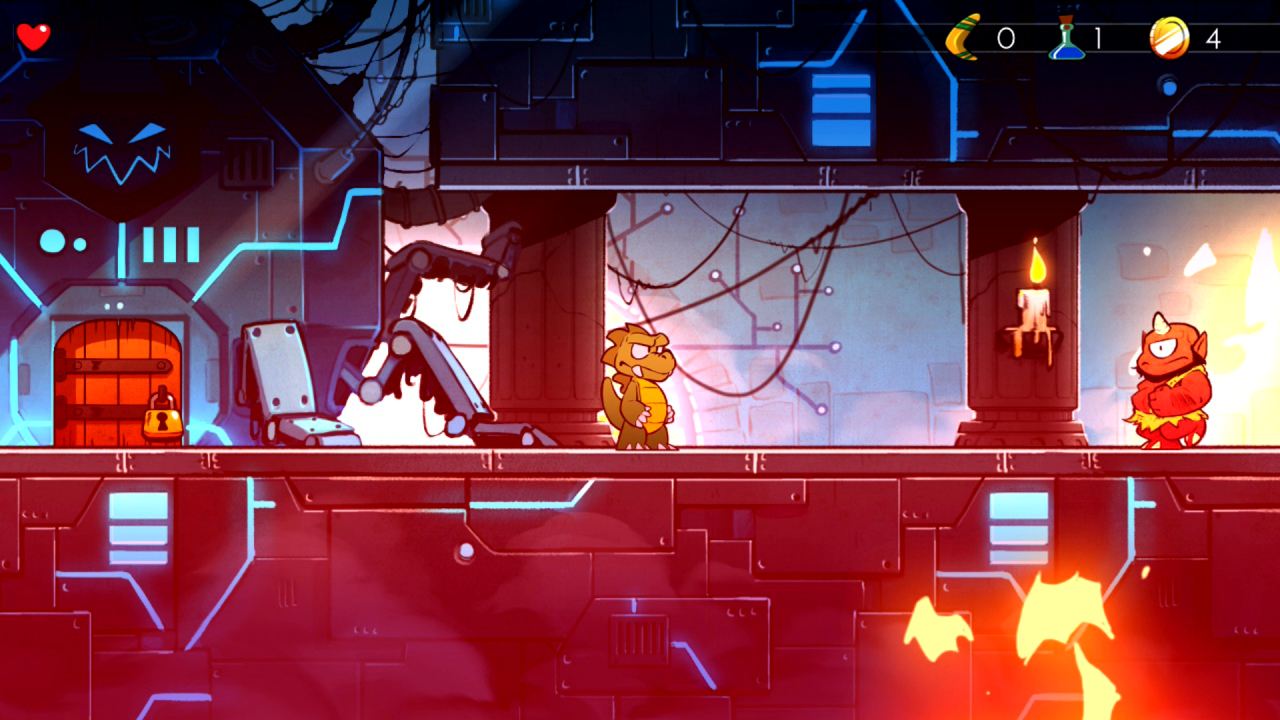 But let’s not gloss over that remaster job done by developer Lizardcube, because this is a remake of a game from 1989 on the Master System, and the likelihood is that most people reading this weren’t even born then – and may not even know what the Master System was. I do, because I’m frighteningly aware that I am a very old man.

The marvellous thing is that you’d never know this was a game nearly 30 years old, because thanks to hard games being en-vogue these days, this is a beautiful looking game and looks like a painting come to life. It’s only obvious if you hit a button which switches instantly between the original game and the new art style. It’s startling and reinforces just how incredible a job the team has done on the new look.

As the titular Wonder Boy, you start with lots of health containers and a powerful sword. Invading the Dragon’s castle, you’ll easily defeat it and be rendered a Lizard-Man. From there, it’s your job to roam the lands and defeat bosses which will turn you into other, new Animal-Men; thus giving you new abilities, and the chance to travel deeper into the world – towards completion.

Despite its retro origins, it’s a nice touch that, while called “Wonder Boy”, you can also choose to play as Wonder Girl (and the titles and in-game text changes to match). Sure, it’s a tiny thing – but inclusiveness in a game like this is worth championing. Although it’s being released in a period that requires it to stand against some massive games, here is a small developer (and publisher) making the effort to be there for everyone.

This is a game that requires patience. It’s a tough one made harder if you rush through like it’s a platformer. There are elements of jumping of course, but the design is meticulous and wants you to slowly approach each enemy and take them out one by one. 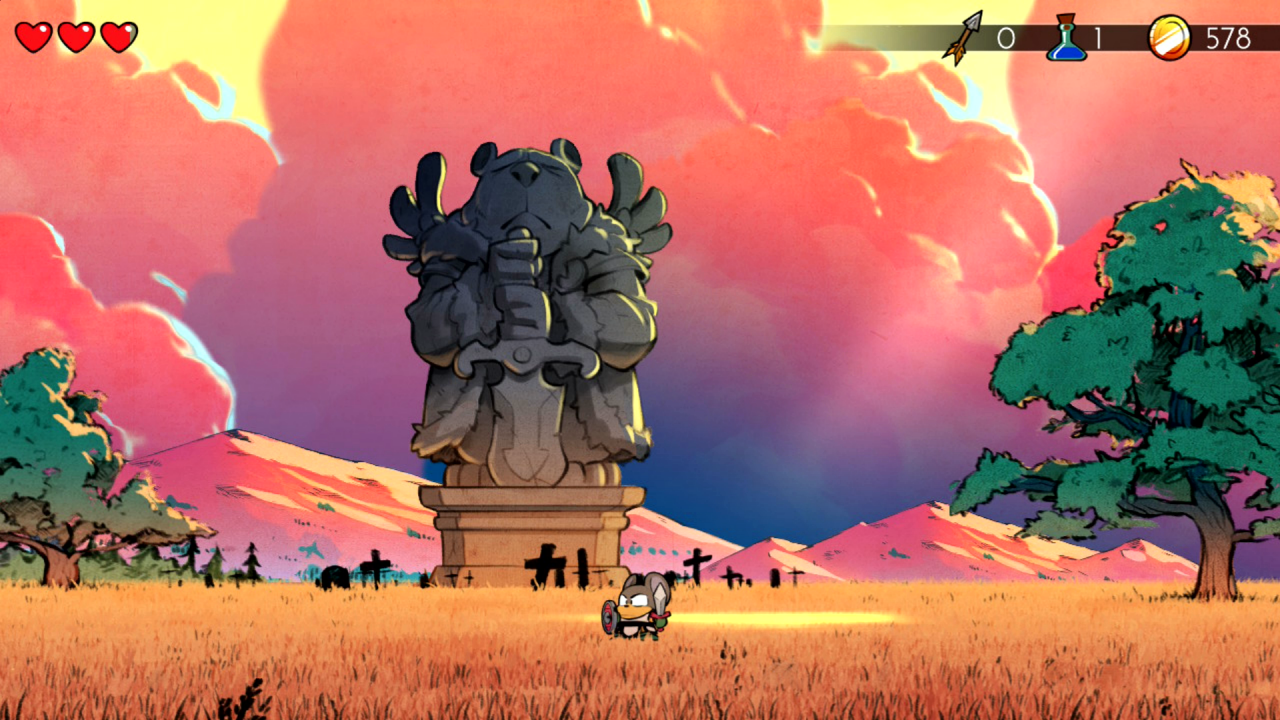 This is made abundantly clear when you reach the third transformation and become Mouse-Man. Now you can climb in small areas and attach to blocks that give you access to new areas, but you are also tiny; meaning your sword-reach is also miniscule. If you run around, jumping at enemies and trying to kill them, you’ll take hits all over. Slow down though, and learn enemy patterns and movements, and you can take anything out – regardless of your stature.

I can’t stress enough how well designed this game is, and strangely it’s the boss battle that closes the Mouse-Man section that really puts this into perspective. The grueling climb up a tower via tiny corridors littered with enemies of all kinds has no save point before that final door to the boss. The difficulty is so high that it’s also one of the first times you can buy a “revive” potion on the way (if you die, it’ll revive you – it’s that simple), but the strangest reward is the boss. Initially you’ll take a hit or two, before realising the pattern is incredibly simple to understand and beat. After that you will pretty much kill that boss without taking a hit. Usually you’d walk away thinking “what a rubbish boss,” but you quickly realise that the real boss was the climb up to the more traditional encounter. 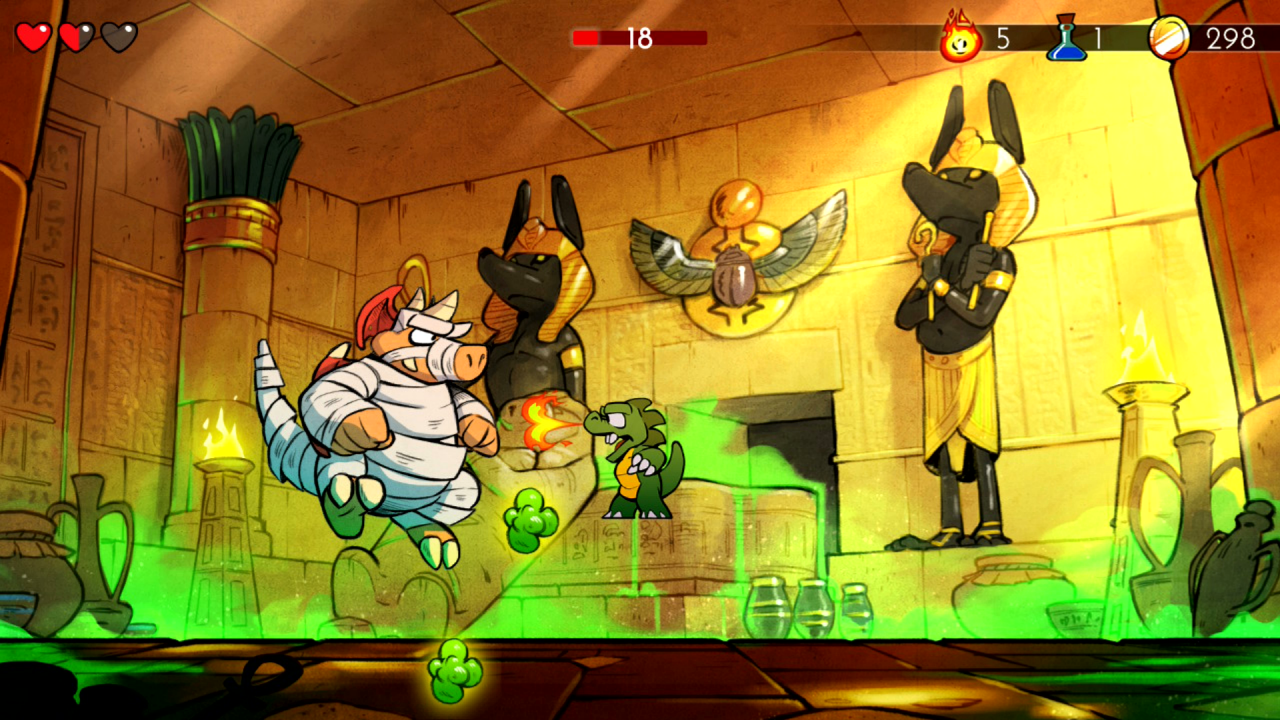 Of course, after beating any area you’ll get a new power in the form of a… well, a new form. This keeps things fresh and interesting – as will finding the numerous shops along the way, and buying new armour and weapons. Killing enemies will get you coins that are the currency of the world, but it’s random what they’ll drop, and it may just as often be a projectile weapon (something that’ll help you kill those outrageously annoying cloud enemies).

There’s no question that the difficulty will put people off, though. Taking a hit will stagger you in a similar way to the Mega Man series, and can mean you’ll fall off to another screen. On its own this isn’t the worst thing in the world, but there’s an early portion where due to the lack of a certain ability you can’t get back up the easy way. Expect to be frustrated unless you take your time clearing out the enemies and – again – learn how to take them out without taking a hit, because death will send you back to the starting village; requiring you to travel all the way back to where you were before you died.

Wonder Boy then, reminds us how far we’ve come but also how great games can stand the test of time. Sure, it won’t be for everyone – and many will be put off by the difficulty. For those who enjoy harder games that require patience and fortitude however, The Dragon’s Trap is a rewarding and (frankly) beautiful game to experience. It feels perfect on the handheld mode of the Switch, though it otherwise makes no explicit use of the console’s options.

While it’s unlikely to kick start the franchise into matching the likes of a Castlevania or Metroid, it’s a damn good time… and sometimes that’s enough.

A beautiful lick of paint and superb execution mean that Wonder Boy: The Dragon’s Trap is not only well worth your money, but it also feels perfectly at home on the handheld mode of Nintendo’s Switch. This love-letter to the past proves a great game forever remains a great game.