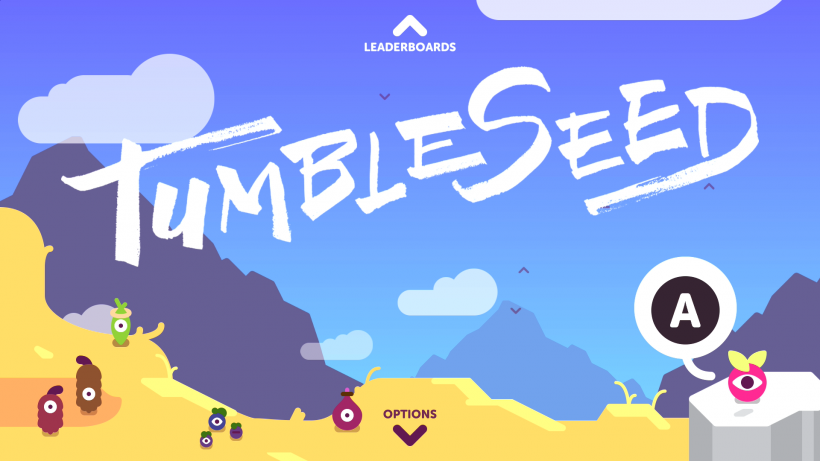 We’re all guilty of making lazy comparisons: every game is hard “like a Souls game,” or has “Ubisoft Towers” (okay, that last one is probably fair enough); but Tumbleseed offers something rare, as it’s unlike anything I can immediately think of.

It’s a mighty strange game, too. You don’t actually have direct control over your avatar, yet somehow you’re immediately and inexplicably emotionally attached to the little seeds that will either make it to the top of the mountain, or die trying. 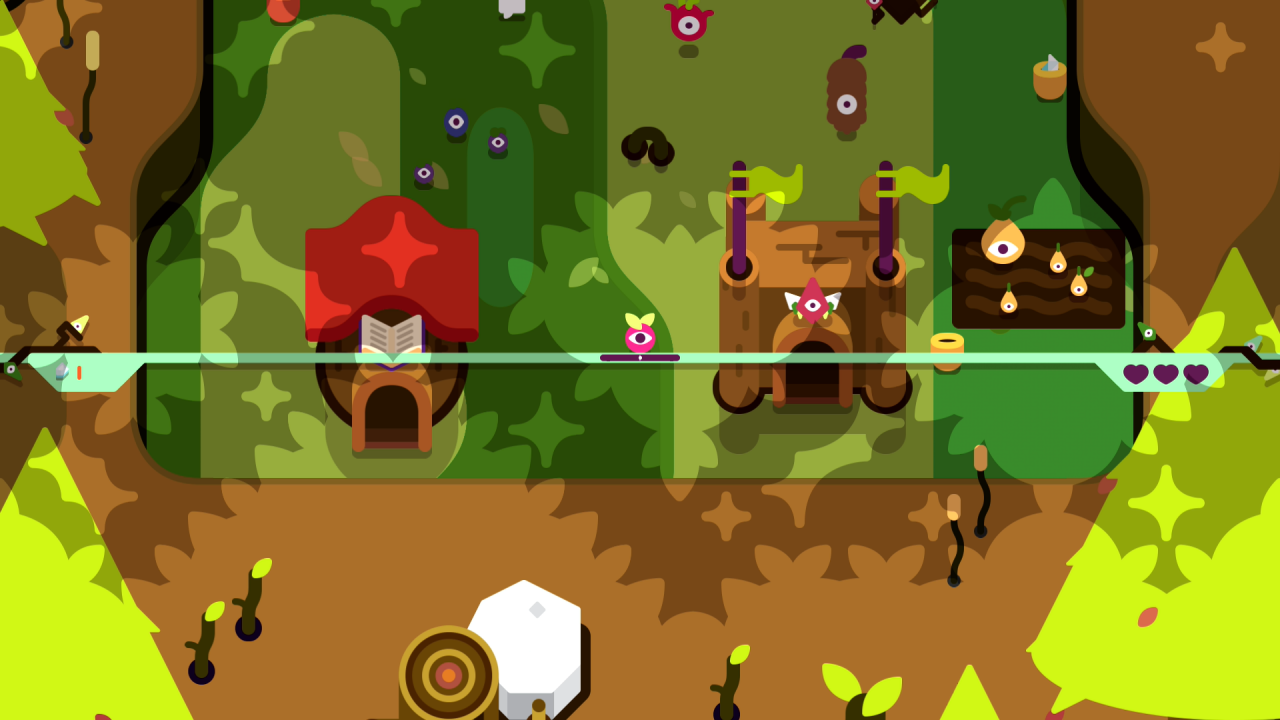 As a Switch game, this is the perfect fit. A single face button (A) and both analogue sticks are all you need to play, with the sticks controlling either end of a big, straight vine that covers the entire width of the screen. Perched upon the vine is a seed, and by moving the sticks up or down together, you lift the seed higher or lower. Moving the sticks at opposite angles (one side higher) means you can also roll the seed left and right; your goal being to fight gravity and reach the top before you die.

On that note, not dying is bloody hard. The procedurally generated levels are monstrously difficult. Potholes on the way are up are the least of your worries, as this mountain is littered with foes that will push you to breaking point on your journey to the summit.

Perhaps it’s the spider that bounces around who’ll get you, as its jump is almost always landing either on or near you. Maybe it’s the absolute scumbag snake that is not only fast enough to cause panic and make you change course (slithering towards you no matter where you go), but will also respawn when you kill it – reappearing as soon as you move up the screen. Hell, it could be the bird enemy; the one that floats slowly from side to side, but the instant you cross its path it will go million miles an hour to harm you.

Christ, this game is stressful. 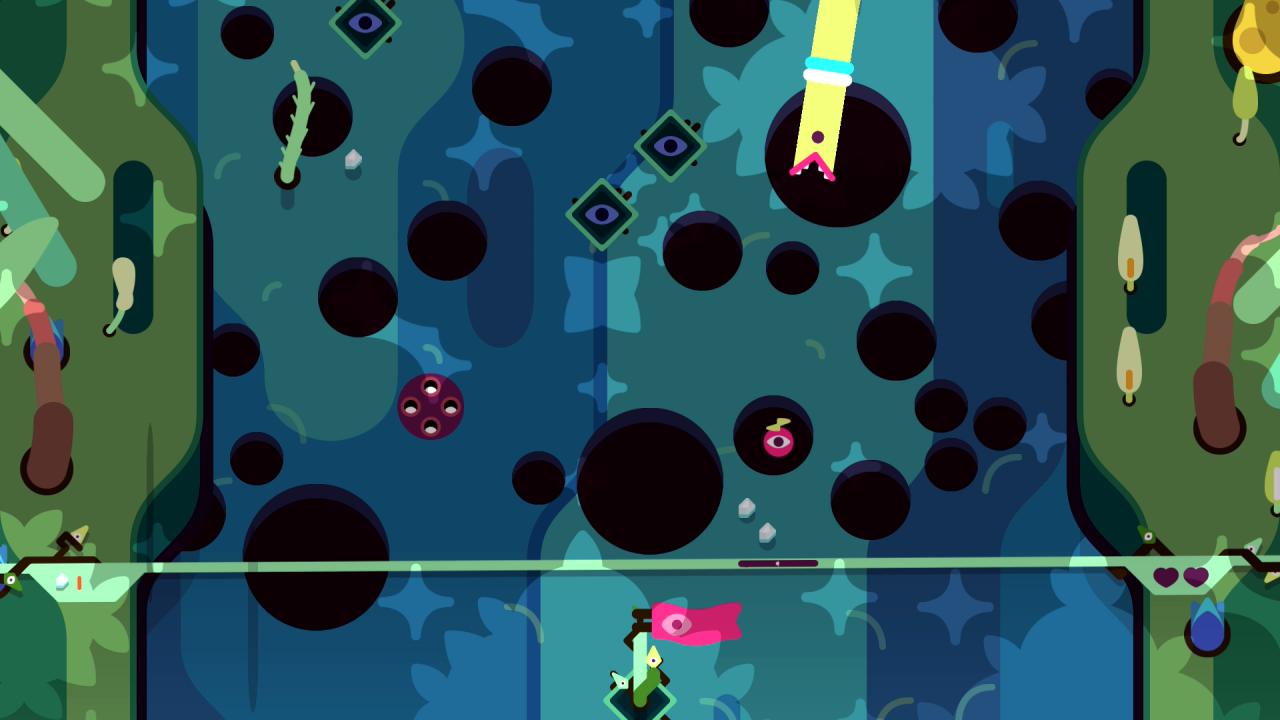 Thankfully, you have health. Hearts that will be knocked down at an alarming rate as you progress, to the point where – on some runs – you’ll take a hit and know right away that this is not “the run.”

What does help though, is the fact you can switch seed-types with the tap of the A-button. You start with the default one which plants a flag. Among all the holes, you see, are small circles that you can plant yourself in. Planting a flag means that if you fall you’ll respawn (health permitting) at that flag. These starting seeds are split into categories that basically amount to attack, collect, regenerate, and continue.

The heart shaped seed will slowly collect heart portions to regain health, while the attack seed grows a spear that spins around you as you climb – meaning you can attack enemies. The most important one is the gem collecting seed, as for every three times you plant one you’ll get a few gems. Gems are important as they are what the other seeds use to actually work. Yes, that means if you don’t collect them on the way up you won’t be able to grow a spear, recover health, or even plant a flag.

Elsewhere, there are seeds you can collect from underground areas that vary in how helpful they are. I don’t know if it’s coming across how bloody hard this game is, but some of these new seeds seem great at first; one firing around a ball that attacks everything it sees. It’s only when it hits you – causing damage to the one who fired it – that you realise this game kind of hates you.

Split into five procedurally generated levels, you’ll probably only see two of them – and that’s if you’re dedicated and stubborn. Tumbleseed simply requires a level of patience that you don’t see from many modern games. You have to proceed with caution, every movement on the sticks a calculated risk. You’ll hope and pray that you don’t lose control of your momentum for even a few seconds, because that’ll be you down a hole if you do. Plus, you probably forgot to plant a flagseed – meaning you’re going way, way down (if you even survive at all).

The problem with the difficulty here, is that the carrot on the end of the stick just isn’t great enough. Seeing a new area is nice, but the sense of accomplishment is soon a distant memory when you encounter your new most hated enemy. You can mix things up with the seeds, and it’s genuinely cool switching mid-run to a more defensive effort, but your tactics will eventually feel set in stone; new efforts met with failure. This is a game that won’t quite let you fall in love with it, because it punishes you at every corner. Take the attacking seed, for example. You can spend half a level building it up with gems and have a veritable murder-seed sliding up the hill. Then you slip up, and down a hole you go. You don’t die, but you lose a heart and every one of the six spears that were surrounding you. That’s beyond punishment, that’s a game throwing two very angry fingers up at you.

Elsewhere, you might finally unlock fast travel that allows you to skip the first level and start on the second, only to realise you have to roll up that first level again with an item attached. The added stress means you’ll take another four or five attempts at unlocking that level skip.

All said however, Tumbleseed is beautifully and intentionally designed. The audio is phenomenal; a plethora of squidges, pops, and squelches popping out of the little Switch console. It’s got lovely music, personality in spades, and it feels cracking in handheld mode. In fact, you could argue the Switch is the best version of the game, as the HD Rumble shakes you so hard you can feel every death. It’s one of those games that makes a real case for the Switch offering something unique, actually. Tumbleseed is a new kind of game to many, and offers up a lovely experience that is both brilliant and frustrating. Were it just a tiny bit easier, it’d be so easy to wholeheartedly recommend – but as it is, people will be wowed by the look and sound and then quickly annoyed by the lack of progress and brutal difficulty. Those that persevere however, will eventually fall for its charms.

Tumbleseed is a good pick up and play game that feels perfect for Switch, but will frustrate as much as it pleasures. While it certainly feels fresh and new, it’s simply going to be too hard for most to enjoy in any long term fashion.