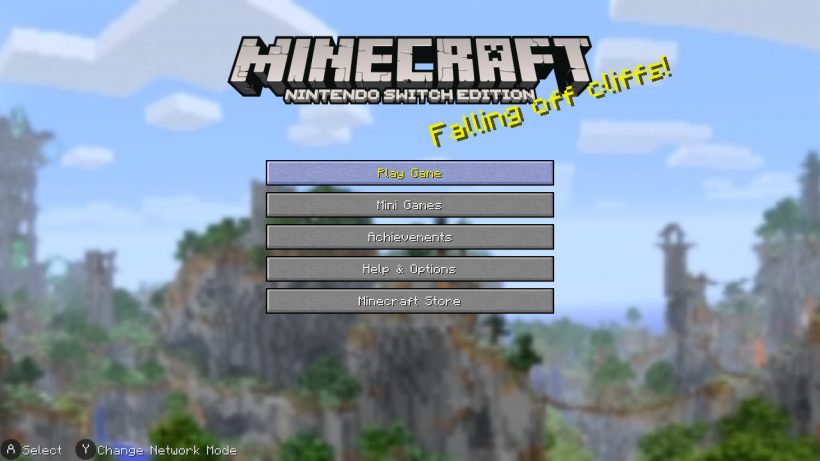 What can you say about Minecraft that hasn’t already been written? It’s a franchise so gargantuan and relevant to wider gaming spectrum that it resulted in Microsoft shelling out $2.5 BILLION to obtain parent company, Swedish studio Mojang AB. The title has been released on almost everything that can run it, so it’s no surprise to see a version arrive for the Nintendo Switch.

Allow me to indulge the few that may not know what Minecraft: Nintendo Switch Edition is all about. It’s a game about breaking the blocky world around you to craft resources, and ultimately do whatever you want. Not to be confused with Minecraft: Story Mode – a story-based adventure game from Telltale Games, this version is the original (vanilla) one. It puts you in an open-world sandbox where the sky (and your ability to visualise the world around you) is the limit. 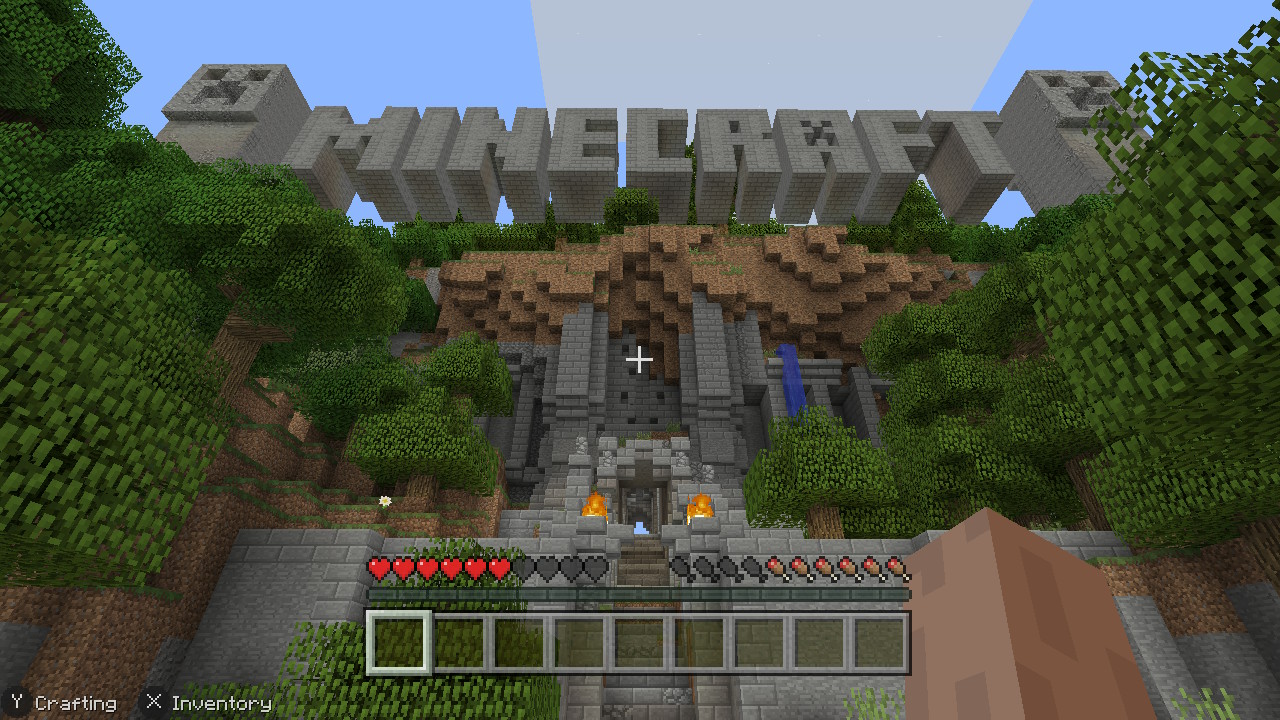 Initially, you’ll be launched into the world with nothing, and it’s up to you to start foraging around in order to survive. Literally everything around you can be deconstructed into usable materials, so that’s trees becoming wood, wood becoming planks or sticks, planks and sticks making tools, and so on. Start combining these with other things around you, and you’ll soon have access to higher quality tools, and items like stone, coal, iron, glass, or bricks. You can dig down into the depths below you to locate some of the rarer materials – like gold, silver, and diamond – or you can even build a portal to a ghastly underworld known as the “Nether.” Whatever it is you want to do and however you wish to play, Minecraft will have you covered.

There are three ways to play, and the first is survival. You have a health bar and a hunger bar. As you can imagine in a large open-world environment, you are NOT alone here. There are a wide variety of creatures known as “mobs” to contend with. Not all are aggressive – such as cows, sheep, and chickens – but some are unfriendly, and they mostly come out at night. Mostly.

Zombies, Skeletons, Spiders, and even the dreaded Creeper – a being which can detonate itself and your valuable creations – are attracted to your very presence. As such, having an abode and somewhere to sleep (thus moving ahead to the next morning) will be essential to your survival… hence the name of the mode. There’s no specific story to speak of, but there is a point to the game and that’s to reach “The End” and to defeat the Ender Dragon. How you actually go about achieving that (or not) is entirely down to you. 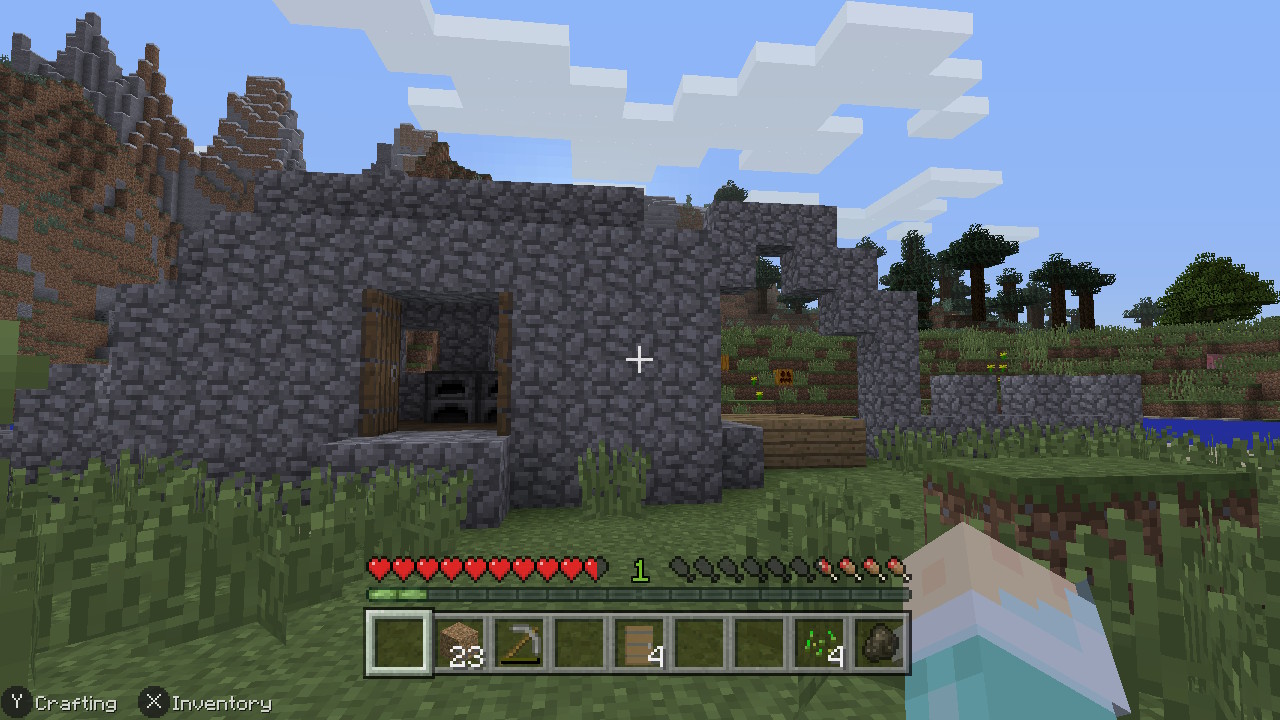 If resource gathering is not your thing and you’d rather be able to play and create with an unlimited amount of resources, then creative is the way for you. With access to every in-game item at the press of a button, this is where you’ll want to spend your time if creating elaborate creations is your thing. You can also play in adventure, which is where some elements of the gameplay like destruction and removal of the world’s blocks are deactivated. If you are playing with others and don’t want them to “grief” your world (Minecraft speak for smash your stuff up), then this is where you’ll be playing.

As fabulous as crafting your own creations can be, there’s no denying that games are much more fun with others. Minecraft looks after that multiplayer need brilliantly. If you want to engage in some 4-player split-screen shenanigans – including in table top mode – than you can do so, providing you have enough controllers that is. There’s no Joy-Con sharing here, and everyone will need their own full controller (pro or otherwise).

You can also take your creations online with up to eight other players, and you can customise the options somewhat to protect your pride and joy. Working together on projects not only speeds up the process, but it can also be a good laugh – at least in my experience elsewhere. The Switch version suffers somewhat through a lack of communication options, as no text/voice chat options are available. You’ll need to find an alternative means of conversing with your friends to be effective here. Whether that’ll improve when the online service launches with it’s voice app is anyone’s guess, but for now it’s “fend for yourself.”

If you’re looking for something more than just crafting and block-breaking in your group sessions, then Minecraft also packs in a couple of mini games for you to get stuck into as well.

Battle throws you into a small arena with chests, the aim being to grab some weapons and kit, seek out your opponents, and defeat them (before they do the same to you). With some cleverly designed dungeon-styled levels, you’ll be either running with your fists/weapons flailing, or mastering the shadows and striking when the opportunity is there. The levels are not destructible either, so your focus is solely on combat – and it’s a huge amount of fun.

It isn’t – in this writer’s opinion – the most fun you’ll have however, as that’s reserved for the other mini-game; Tumble. Again there’s a small arena, but this time the idea is to destroy the ground under your opponent using either a shovel or snowballs. It sounds incredibly ludicrous, and in all fairness it probably is, but it’s also an absolute blast. My children and I laughed for hours. 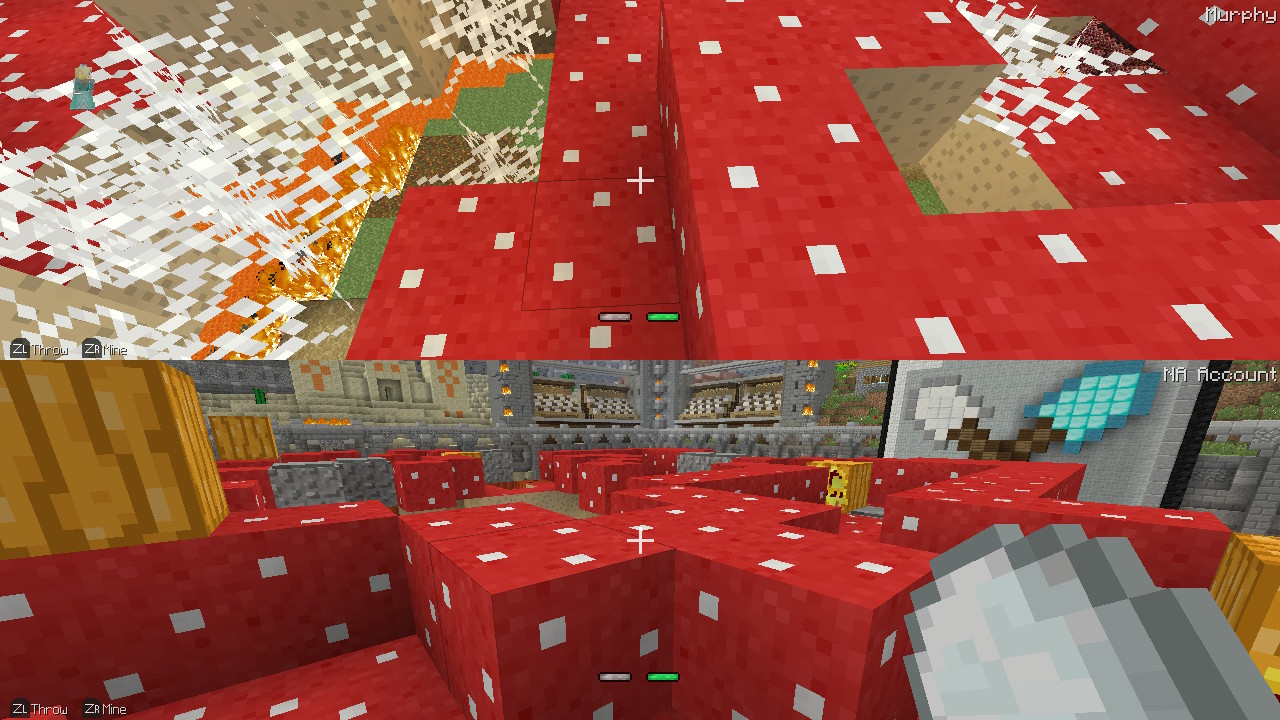 Minecraft is presented in your typical first/third person fare. The left stick controls your movement, whilst the right controls your camera and orientation. The LR and ZR triggers control placement/destruction of blocks or the use of weapons, whilst L and R cycle the items on hand. A is your jump, B discards whatever you are holding, and X opens your inventory. The Y opens a basic crafting ability, and you can run by pushing forwards with the left stick sharply.

In creative mode you can fly to gain a better perspective of your surroundings and this is activated by pressing A twice. Pressing it yet again will let you climb higher, and depressing the right stick will let you decrease your altitude.

Best described as featuring an 8-bit 3D world, you are either going to love or hate this game’s look (depending on your graphical preferences). There are skin-packs available which take the visuals and put a different spin on thing, some of which – such as the City pack – make a huge difference to the way it looks. Not all of these skins are free however, and you could spend a few quid easily trying to find a flavour you like.

On the technical side, the game runs at 720p both docked or undocked at launch, and we are told it also runs at sixty frames per second. 4J Studios are apparently looking how to get the docked experience up to 1080p – and though that’s not available as of this review, if it’s implemented in the future then it will undoubtedly enhance the experience even further. From a performance perspective, console Minecraft has always had pop-up when moving as new “chunks” of map appear before you, but this is much more noticeable when playing in handheld mode on the Switch. It’s certainly not enough to ruin the experience, and enough of the world is in view at times to really make you feel immersed in your surroundings, but it’s worth mentioning.

Also worth mentioning is the sound, and luckily the traditional Minecraft sound is present and correct. Again, you’ll either like the simplistic chirps, beeps, and notes that play out around you – or you won’t. Personally, I’ve always been a fan of the atmosphere it creates. 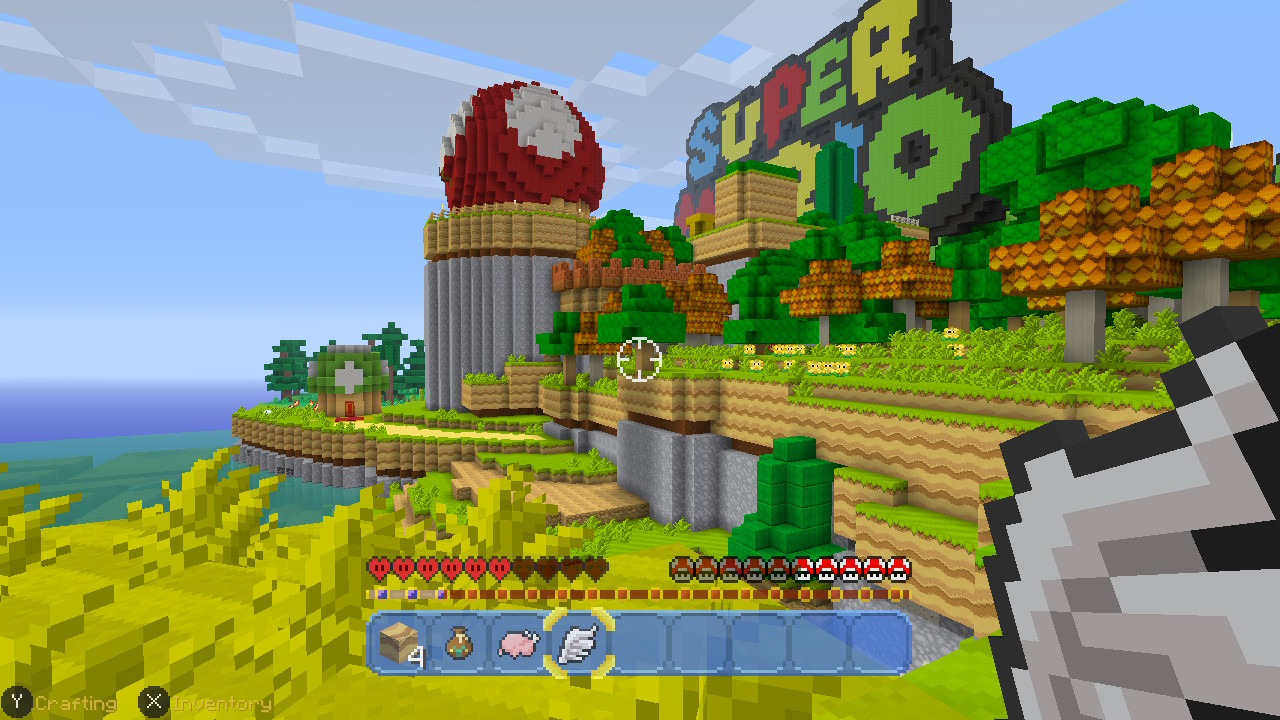 Sticking with the theme of atmosphere, one of the best things about this package is the Super Mario pack (which is bundled with the game). With everything taking on a distinctly Mario flavour, the blocks, items, and even the music are fabulously recreated in an 8-bit styled representation of a 3D world. Playing on the specifically created Mario world is an absolute joy, with recreations of many Mario moments, pixel art of popular characters, and much more. Warp pipes even connect you quickly to other parts of the map. It felt amazing to be part of this world, and I must tip my cap to the team; they must have spent countless hours recreating this representation of the Mushroom Kingdom.

If you own a Switch, you’ll probably be only too aware that Nintendo decided against a visible trophy/achievement system for your Nintendo account, but that doesn’t mean that games can’t implement their own. In that vein, Minecraft is packed full of achievements to unlock. Sure, you aren’t going to be able to show it off easily like your would on other systems, but at least you’ll get some sort of internal acknowledgement for your progress.

There are eighty achievements in total, and they vary from simply using tools and crafting basic blocks (easily completely by completing the tutorial), to excavating some of the more precious commodities from the ground beneath you. Making signs or lengths of rail will also be rewarded, as will defeating enemies in certain ways. Battle mode rewards are also looked after well, and recognized with in-game achievements -though conversely, you won’t earn achievements in creative mode (for what I hope are obvious reasons). 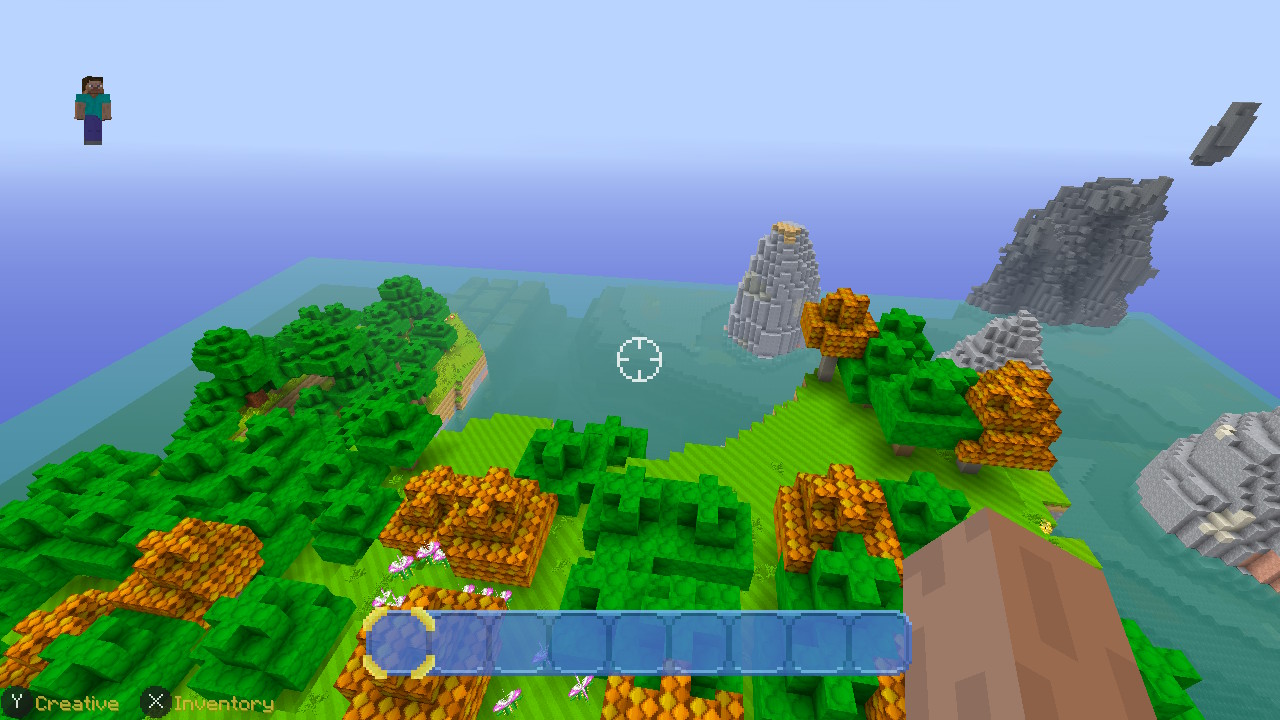 So, the game provides you with hundreds of hours of entertainment, bags of nostalgia and fun, and the ability to create anything that you can think of – albeit in a block-based form. You’d think it was an essential purchase, right? If you’ve never played Minecraft before then I’d easily say yes, although with a word of caution; there’s surely a reason you haven’t purchased it yet. If you’ve just been waiting for the perfect platform to play it on, or just didn’t get around to it, then now is absolutely the perfect time to grab it. If you have played it elsewhere, and – perhaps more importantly – you’ve played it for hundreds of hours, then you may find it a little stale.

If you don’t already own Minecraft elsewhere and the idea appeals to you, then there’s no question; buy it! If you do own a copy on another console, then you’ll be needing to justify that double dip. It’s the most practical and probably the best portable version of Minecraft you can buy however, and that added Super Mario content really adds to the charm. Plus, you’ll be playing this for a very long time – and the only real limit will be your imagination.