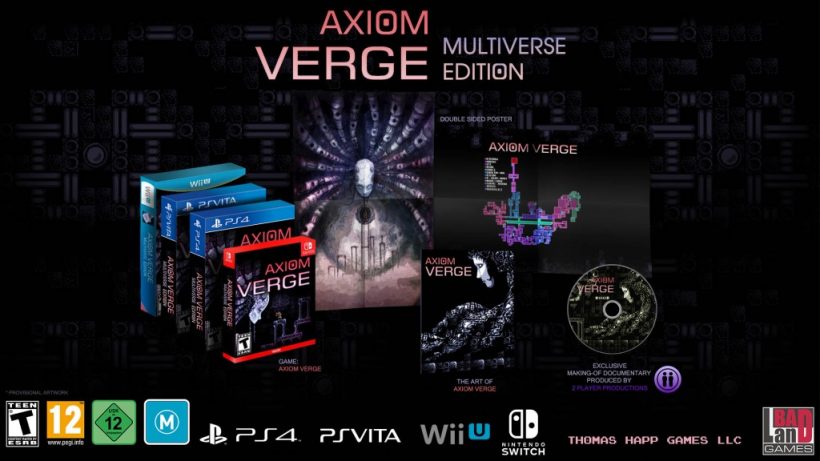 The critically acclaimed Metroidvania crafted by a single developer gets physical, physical on the Nintendo Switch.

Tom Happ’s passion project Axiom Verge initially received a digital release in March 2015 and has since made its way to various gaming platforms. Collectors of physical media can now rejoice, however, as publisher BadLand Games will be releasing Axiom Verge: Multiverse Edition to the masses this August on Nintendo Switch (alongside Wii U, PS4, and PlayStation Vita).

The physical release will contain the actual game along with a handful of retro goodies, like an art book, a double-sided poster, and a “making of” documentary by 2 Player Productions — the folks behind the documentaries Minecraft: The Story of Mojang, Double Fine Adventure!, and Amnesia Fortnight. A CD soundtrack will also be included in all pre-orders of Axiom Verge: Multiverse Edition, though pre-orders are not yet available as of the time of this post.

According to the official BadLand Games website, the pricing for the Multiverse Edition will be $29.99, €29.99, £24.99 on the PS4, Vita, and Wii U, but the only price confirmed for the Nintendo Switch release is €39.99. I’ve since reached out to Tom Happ and BadLand Games for the official pricing elsewhere and will update this post accordingly.

UPDATE: It’s been confirmed to me via Twitter by developer Tom Happ that Axiom Verge: Multiverse Edition will be more expensive on the Nintendo Switch than the other platforms. Official pricing is $39.99, €39.99, and £34.99.