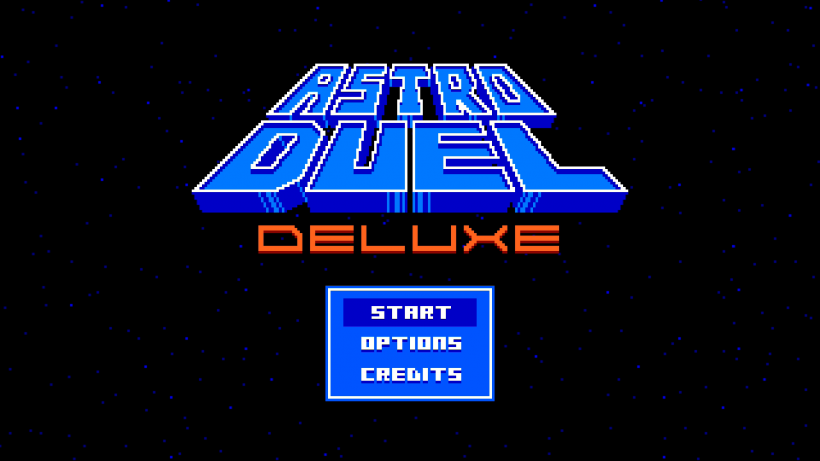 It’s funny, really; despite being the newest console on the market, Nintendo’s Switch is playing home to some great retro-based games. Along with the innovation in the likes of Breath of the Wild, we’re back playing Wonder Boy. For all the talk of it being a new game, ARMS feels like an evolution of Punch Out!! (a series that needs to come to Switch at some point).

With that in mind, Astro Duel Deluxe is yet another old-yet-new-again game which takes ideas from the past and tries to bring it up to date, while keeping the core ideals of Switch at the centre; play anywhere multiplayer fun. 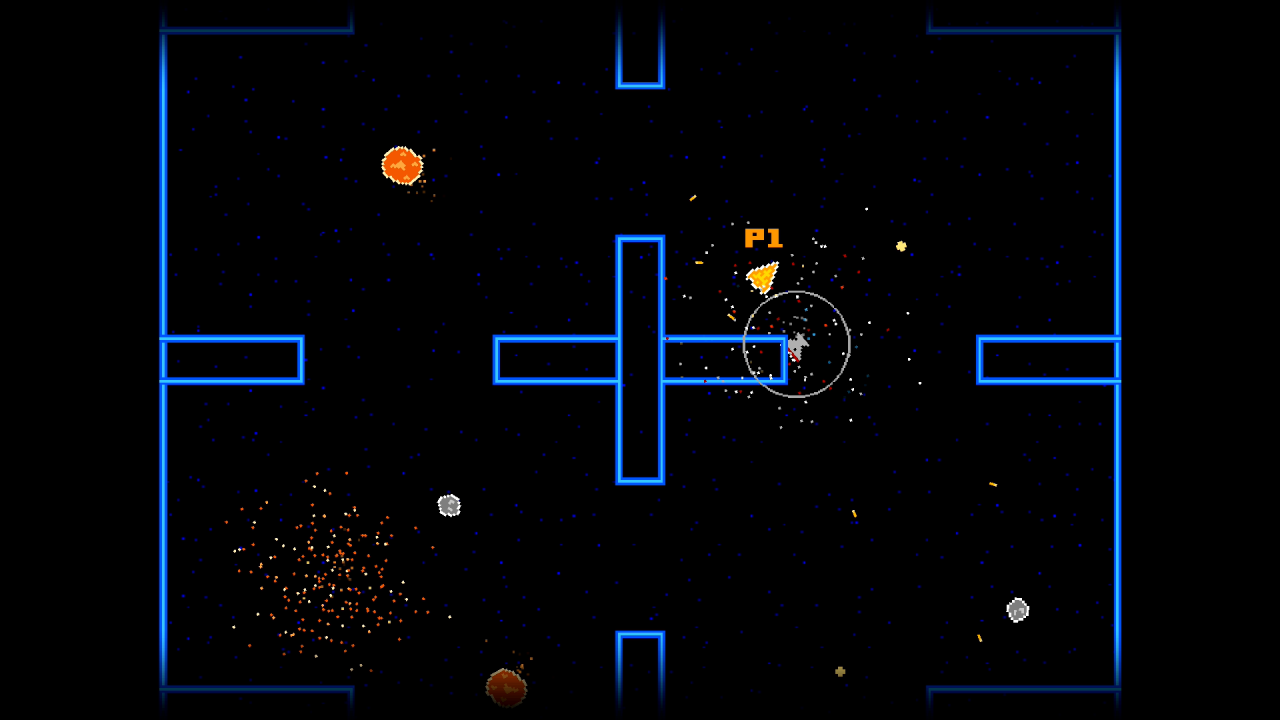 First though, what is it? I’m going to assume you’re familiar with Asteroids, where you pilot a triangular ship and shoot things, and those basics are exactly the same here. Pushing the B button will propel you forwards, Y will shoot your primary weapon (you can’t spam it, and you’ll lose if you don’t at least try to aim carefully and shoot when you have a chance of hitting), and A fires your special weapon – if you’ve picked one up from the battlefield.

I say battlefield, but really it’s just a square arena with a few obstacles casually littered around to make piloting your triangle a little more difficult. The maps aren’t overly complex but they are varied within the parameters of the game. In microcosm, this is a game lacking huge complexities, instead focusing on skill. 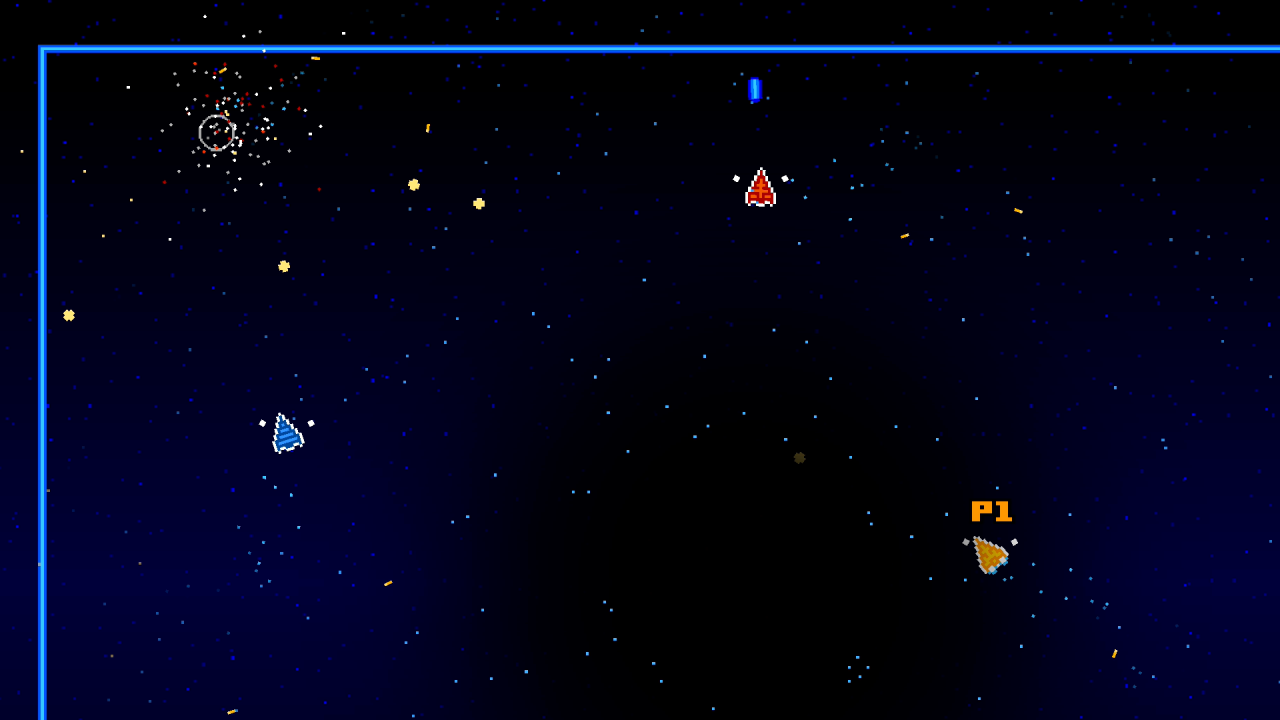 Make no mistake, this is a multiplayer-only game. The idea is that you play against the AI (with varying difficulty) or other human opponents. There’s three modes to cut your teeth on, starting with classic. This is a very basic mode for 1-4 players, which is the most balanced (and frankly slightly boring) mode. Chaos is up to six players, and spawns you closer to your opponents while also adding more power-ups.

Within these two core modes, there are four separate game types, but it’s really just player vs player and team deathmatch. The difference is between killing ships and killing pilots, and that amounts to a need to shoot a ship then a smaller human to finish the job. Replays will run after each round, and a nice animation that has the leading team accelerating on a physical scoreboard kicks in, then you carry on playing.

Rounding off the feature list is a party mode, which incorporates the touch screen (bizarrely, by the way – the menu buttons aren’t touch screen enabled). Built for four players, each corner of the Switch screen has two on-screen buttons; one turns right, the other shoots. Your ship will constantly move, so it’s fairly frantic, but the small screen just means you’re all bunched up for something you could play on a big screen with extra pro controllers, or splitting some Joy-Cons up.

There’s no online, which is a major omission and a terrible shame. It would elevate it from a game you play now and then before forgetting, to something you will fire up to test your skills against other people online. Before each match you have to do a warm up lap which acts as a way of reminding you how to thrust, but this quickly becomes old and feels like it’s masking loading in a game that shouldn’t need to load for more than a second.

As a Switch game, this is one best played on the big screen. The components of the game are already small, but the screen is just not big enough to make Astro Duel Deluxe playable in tabletop mode. It’s also a bit pricey at $14.99, especially when there’s an older iOS version of the game that costs a third of that. Sure, it’s not the same game, but the experience is similar. For the record, this non-deluxe edition of the game is also on PC – again, cheaper. It also relies heavily on retro affection. While it has moments of fun, this is a game that a younger audience will bounce off very quickly. The visuals dig into the hearts of people who are 30+ who’ll fire this up for 5-10 minute bursts here and there, but who’ll never really shout from the rooftops about it. Those without rose-tinted goggles probably won’t feel the same way. It’s not bad by any means, but the only thing particularly strong about Astro Duel Deluxe is the HD rumble, which – in fairness – is top notch.

It’s by no means bad, but Astro Duel Deluxe suffers because of the lack of an online option, and it just doesn’t have enough variety to keep you entertained for long.