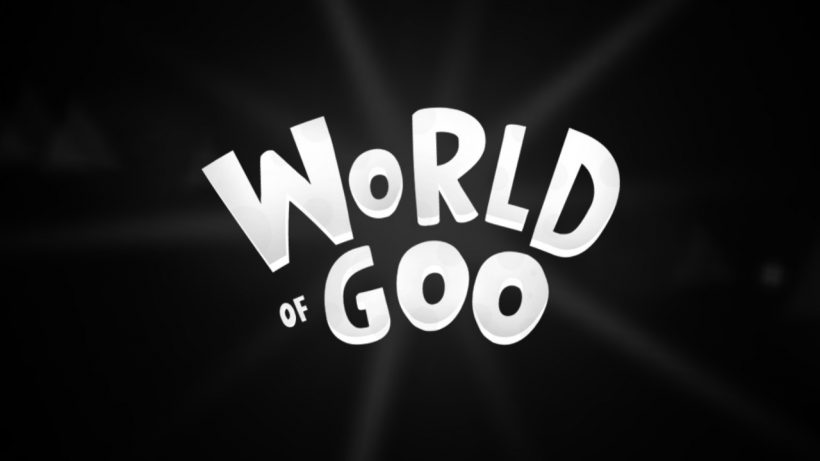 Physics games are a dime a dozen these days, but rarely does a physics game have a hook that catches you for more than five minutes. World of Goo is that rare occasion, and over its handful of chapters and plethora of differently styled levels therein I had a lot of fun… when it worked as intended. It’s one of those games you really want to like, but can very easily be frustrated by.

Focused around building structures out of goo balls and their connective properties, World of Goo has you taking a simple existing structure like a triangle or square and adding to it by connecting extra bits (usually to reach a destination tube). Doing so efficiently will mean you’ll have left over goo balls, which are the “currency” you need to progress to the next level. Sometimes they’ll only require a few to pass, while other levels will have you trying to squeeze out every last bit of goo. It’s all about efficiency, so you definitely need to understand the physics of it all to do well. 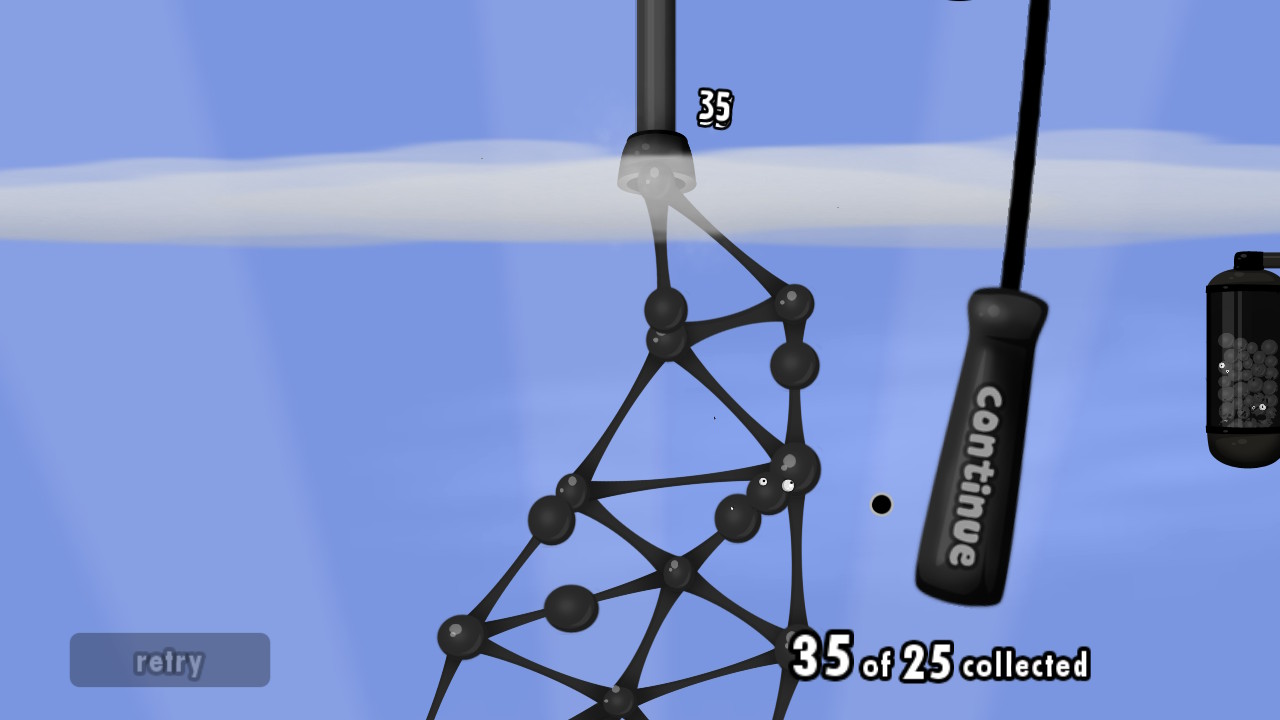 Over the game’s four main chapters, you’ll encounter challenges that span from building a bridge over a hole, to using flammable material to build a line to a fire source, or flinging infected bits from pre-made shape to pre-made shape in order to get them to the goal. There are basic challenges – which are also the default level challenges, but then there are also the Obsessive Completion Distinction goals – which are often a fair bit harder. As such, there are many different situations that you’ll encounter with your goo, and some will take a lot of trial an error no matter how much you understand physics, but it’s all in good fun… when it works.

That brings me to the biggest problem I have with the game; the controls. Able to be controlled either by motion controller (like a pointer) or touch, you would think that you’d have some adequate options – but really you don’t. Motion controls suffer from drift, and I found myself re-calibrating my Joy-Con with the “+” button almost as often as I was placing goo balls. Touch is cumbersome, and even without overly large fingertips I found I was always missing placements, or accidentally pulling goo balls out of place when I meant to scroll or pick up a free bit of goo. This issue with a lack of accuracy overall means that I often messed up structures near the end, the middle, and even the beginning of each build. It was massively frustrating, and I put the game down quite a few times due to issues stemming from accuracy in both modes. 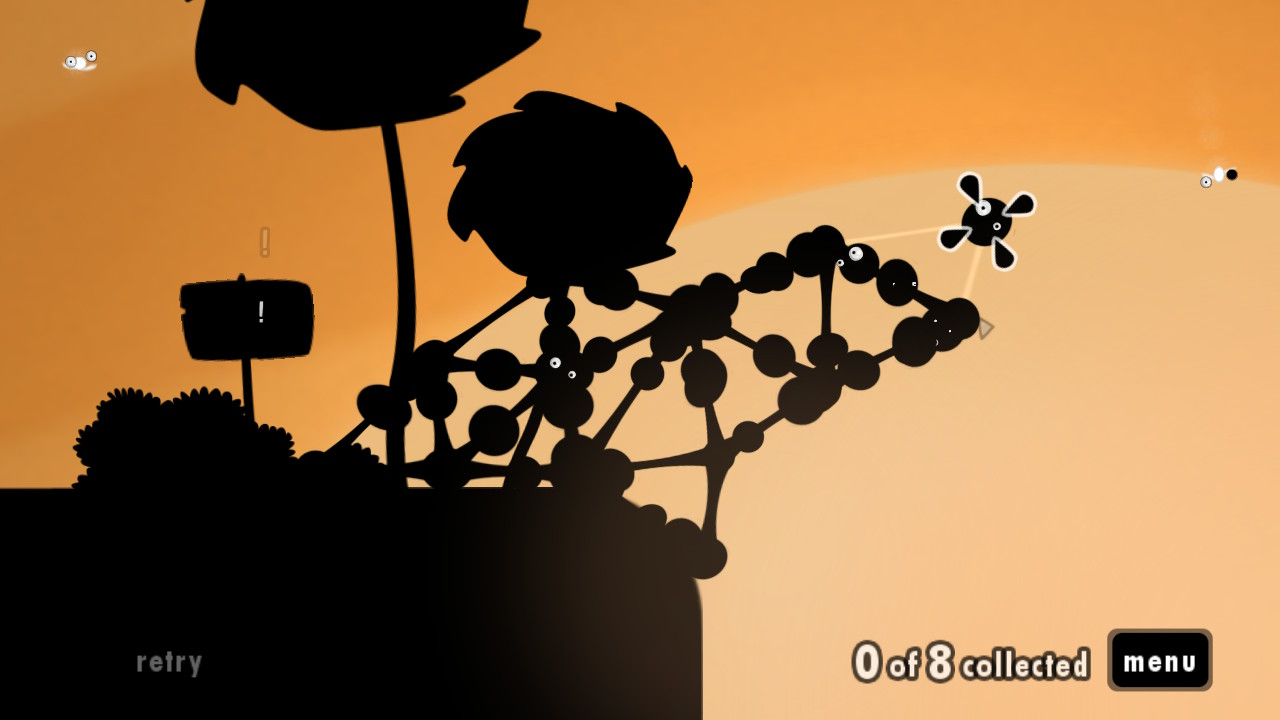 As for the graphics in the title, they were executed flawlessly – though they were certainly nothing spectacular. The unique themes across the chapters and their levels, the effects when flammable bits ignited, and the short cutscenes were all well done; never feeling like they were sub-par or intrusive. That said, it never really seemed impressive… so I guess you win some and you lose some with picking such a simplistic idea.

The sound aspects of the game seem solid at first play, but they can get grating and annoying fairly quick. I definitely preferred playing with the sound off on this one, though others with a tolerance for carnival music (which is what this sounds like) might fare batter.

In the end, World of Goo is a game that does what it set out to do, but is held back by its control scheme and limited scope. It doesn’t offer too much aside from the just-shy-of-fifty levels included in total, and that ultimate goal of building the tallest tower out of the goo balls you collected during the game – so once you’ve finished it there’s little reason to come back. What could have been a fairly good game is instead a fairly average title of its calibre; and as such I can’t recommend this one to everyone.

World of Goo is for the die-hard fan, the patient physics fiend, and the gamer looking to get in a few minutes of play at a time – but it might not be for you, so make sure you know what you’re getting into.

World of Goo is a game with an excellent concept, held back from greatness by its limited scope and inaccurate control schemes. More levels, a proper ultimate goal, or even a good control scheme could’ve boosted this game out of middle-of-the-road territory – but as it stands, that’s right where it sits.

One thought on “World of Goo Review”