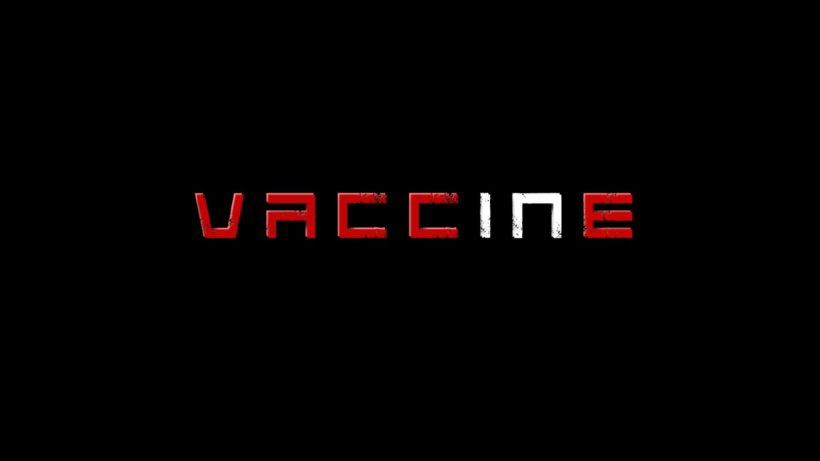 To those who haven’t played it, Vaccine seems very much like a rip-off of the original Resident Evil. You’re stuck in a mansion of sorts, there are corridors and hallways everywhere, there are zombies and hunter-like creatures running amok, and the way the voice says “Vaccine” when you start a new game all seem oddly familiar if not dead on. Then there’s how you choose between male and female characters, the way the character attacks with the weapons, the style of graphics used, and the whole “notes everywhere” web of story line hints – all of which practically scream Resident Evil in your face. That’s just the surface though, and underneath this game is a fair bit different. 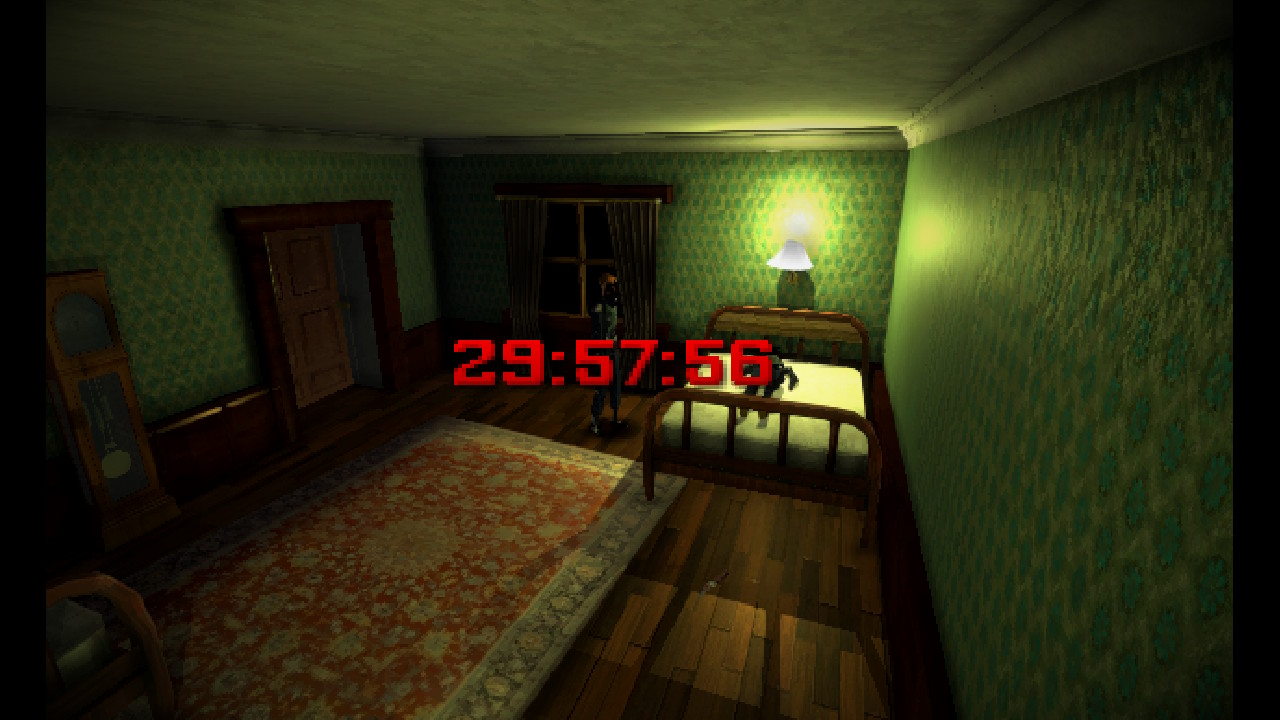 Likely one of the first things you’ll notice when playing is that Vaccine is a procedurally generated “save your friend” style game with a time limit – not a lengthy survival horror slog. The entire game will take you less than an hour to beat if you’re quick in the inventory menu (which stops the timer), though due to its high level of difficulty it’s clear to me that almost everyone will take much longer than that from start to finish. You’ll likely be repeating the three tiers of vaccine hunting (or maybe just the first one) over and over again until you finally have the skills and the luck to make it to the end, so be prepared for that.

The other big difference is that Vaccine is a game where you can upgrade your character’s abilities – sort of like an RPG. By collecting experience (which comes by way of damage to an enemy or interacting with select objects) you’ll be able to upgrade your character’s determination, stamina, health, luck, and aim – making for easier kills, longer running, more life, and better item drops. All of this is done from the inventory menu, so you can do it even in the middle of battle if you like (especially since the inventory menu pauses the game). It’s an odd system from a Resident Evil standpoint, but it works well enough in Vaccine, and you’ll be thanking your lucky stars that it’s there once you get to the later tiers. 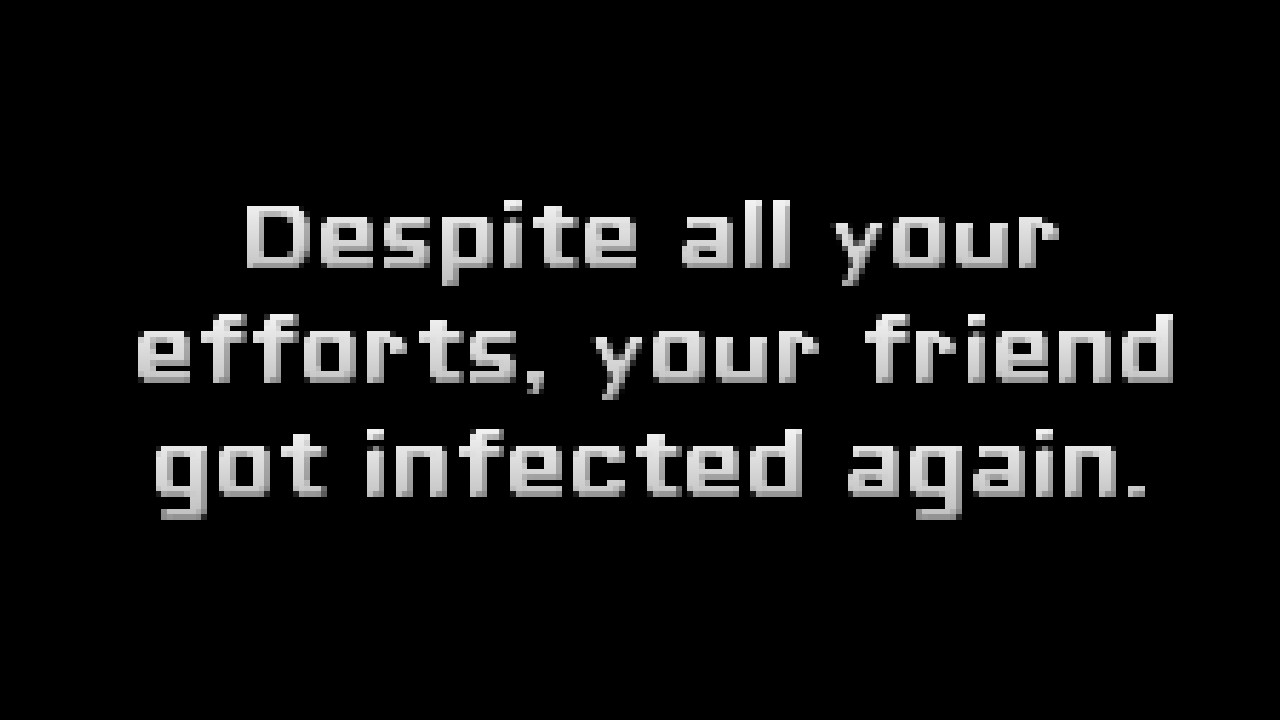 Speaking of the tiers in the game, the three tiers of vaccine hunting play out in a system which removes ten minutes from the starting clock on completion – and kicks you back in for another of the same thing all over again. As such, you’ll be playing though games limited to 30, 20, and then 10 minutes before finishing the game proper. That’s because your friend – the one who you’re getting a vaccine for – is an idiot, and keeps getting infected. You must really like him or something, ’cause man is this game hard!

As I said before, in Vaccine you’re going to die a lot. Plague levels of digital corpses are going to be piling up as you attempt to get your idiot friend the help he needs – even the zombies being a problem early on. When grabbed by one of these lesser beings your health will be munched away as you flail at the controls, and when they let go you only have a minute to react. Hunters are worse, and seem to chomp away health like it’s going out of style – but nobody is as dangerous as the boss in the lab, which sort of reminds one of the Tyrant from that biohazard-ridden game this one seems to draw from. 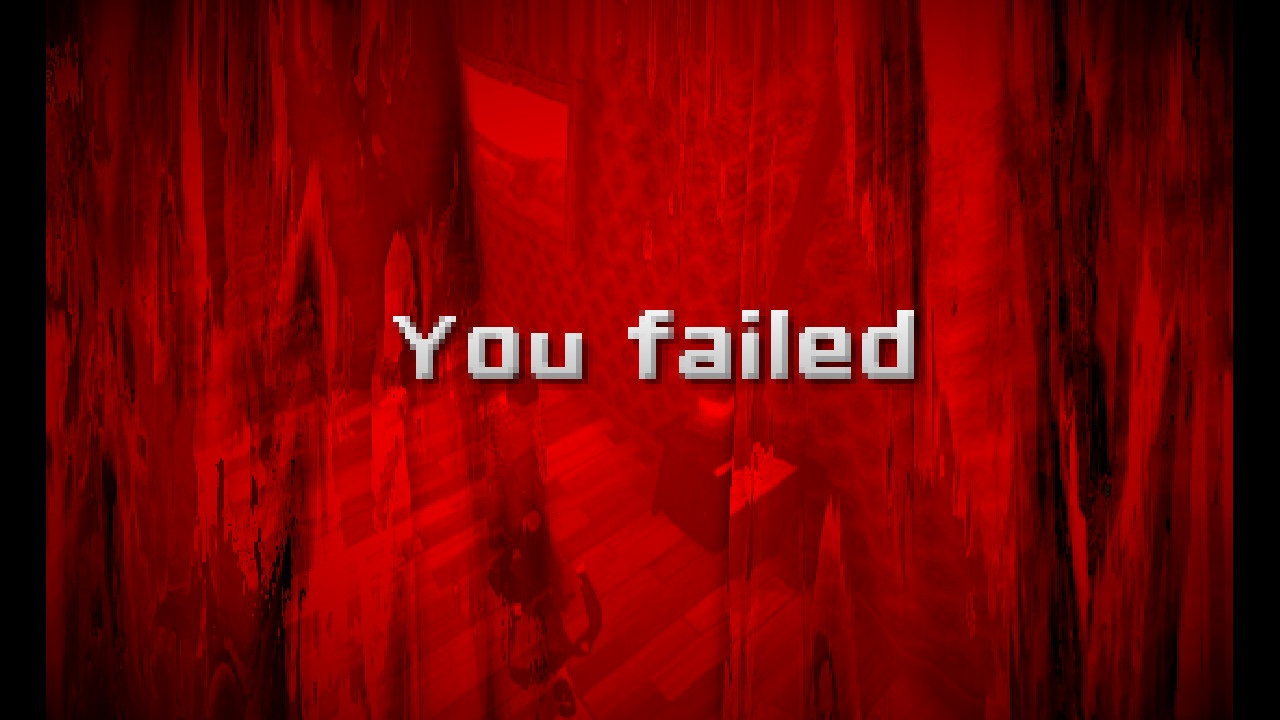 Almost as dangerous as all those things put together however, are the camera angles. You’ll often be walking right into papa zombie’s arms since you can’t really see or hear them coming from a lot of angles. Be prepared to jimmy those controls!

Behind all this however, is a game that itches for one more go. Sure, it’s short if you pull it off – but most times you’ll be getting ate to death before you even get close. Even if you manage to get the hang of staying alive though, there are still the fastest run records and the procedural generation to take on… meaning this one should last at least a bit longer than a single, full run-through. 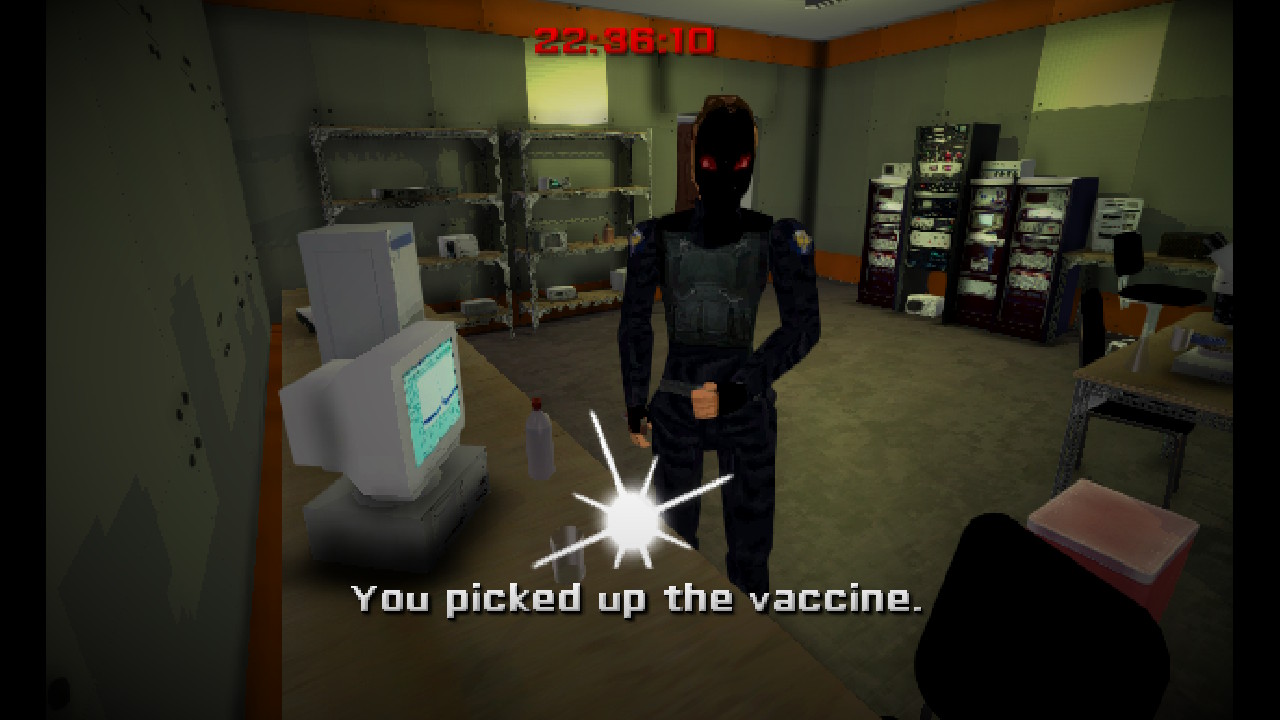 What it doesn’t offer though, may turn you off. There is no real save function – meaning you’ll always have to start a new game when returning to the game after it being closed completely. There’s also no difficulty level setting, meaning if the game is too hard for you to enjoy it you’re pretty much screwed. These two little “issues” may turn one off the game entirely, but I thought that they were used quite well. I hate to use a tired comparison, but this almost seems like the “Dark Souls” of Resident Evil; as hard as can be, and completely unforgiving. If you can’t handle the heat of that idea, you had best step back from the metaphorical oven that is Vaccine. 😉

As we look to the title’s graphical prowess, it’s quite obvious that the game looks like the PlayStation One version of Resident Evil; it’s got the blocky, pixilated art style down pat. Though I’d usually call that a bad thing for a game of this sort (especially in this day and age), it actually does Vaccine quite a bit of justice – and makes the game feel more atmospheric. The dark corners and heavy use of stationary camera angles make for a good horror style environment, and the pixilated art lends to that theme by making everything a little less sharp in your eyes. Is that a monster, or just a shadow? You’ll have to pay attention or you might find out the bloody way. 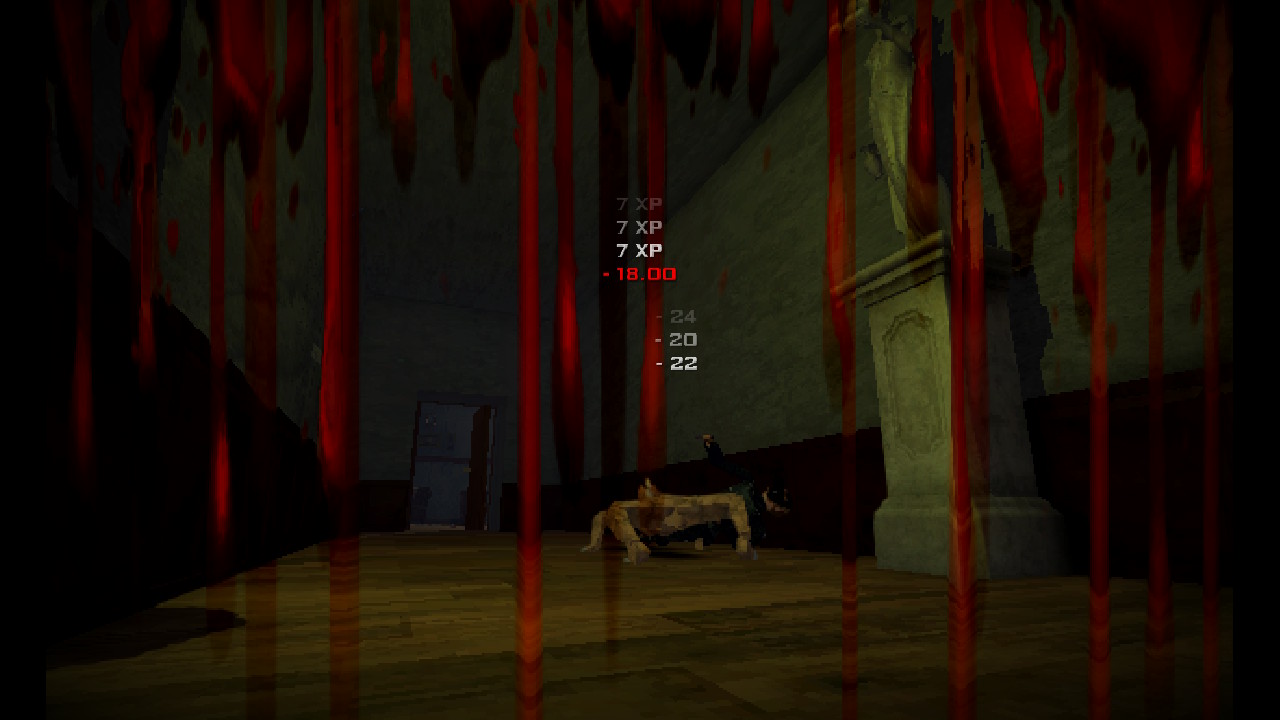 Though the game looks kind of retro, it also has the good sense to run solid – which is good news for those nitpicking over a dropped frame or two. You won’t find any performance issues here, unless we’re talking about how you got killed fifty times before you finished tier one. 😛

Thankfully, this solidness also extends to the sound, and I’m happy to report that the audio in Vaccine is serviceable. It’s not going to be winning any awards for its efforts, but you’ll be able to hear and understand everything put forth just fine when you give it a go.

While there are many things that you can nitpick about Vaccine, one thing that I think is clear is that it can be fun and addictive. It takes a pretty interesting game to have you coming back for more so soon after dozens and dozens of deaths, and this game manages to do that in spades. It’s not pretty, it doesn’t sound the greatest, and it’s not entirely all that original; but it’s a game that might cure what ails you, if what ails you is a lack of a fun and challenging game.

Do yourself a favour and take out a few bucks for your Vaccine, you’ll feel better once you’ve injected it into your Switch. 😉

A game which seems to draw a lot from Resident Evil, Vaccine is more than just a clone; it’s a hard-as-nails rendition of what the series would be like if it was procedurally generated and smaller in scope. At this they’ve succeeded, and have managed to weave in some fun to boot. It’s not the best Resident Evil clone I’ve ever played, but it’s better than average – and the gameplay twists are both addictive and satisfying in their own right.