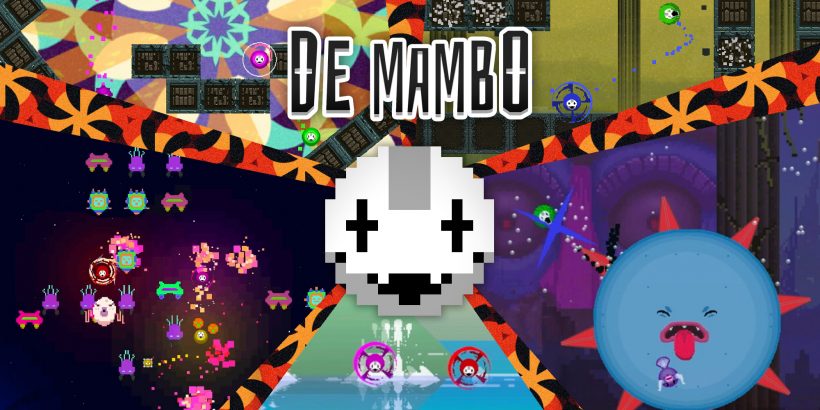 Akin to Smash Bros., the 8-bit, retro-inspired De Mambo is predominantly a multiplayer game. There is a single player mode, which I will discuss later on in the review, but for now – let’s get stuck into where you will find yourself (and your friends) spending most of your time!

The aim of De Mambo is simple, send your opponents off flying off the screen whilst trying to remain on it yourself – with the last person standing crowned the winner. You can play with up to three friends, allowing for four player battles that can get quite hectic and heated! Before each round you get to pick which colour you wish your circular character to be, and are then presented with the stage select screen. Although only a few stages are available to duke out in from the off, after a few rounds you will start to unlock more levels. All participants can pick a stage, and then one will be selected in a roulette-like fashion – which I thought was a pretty nifty way of doing things and would ensure that everyone has a fair shot of playing on their level of choice.

The arenas that you will be battling in are quite varied, and I found myself excited to unlock a new one and see the different ways that the level design would affect the gameplay. With features such as warp pipes that would transport you to different areas of the stage (in a similar fashion to those found in the Mario games), clouds and water that you can float through to take advantage of increased movement capabilities, and environmental hazards such as lava, there is quite a lot of variance to ensure that each of the many stages in the multiplayer feels unique. This is helped by the fact that De Mambo‘s 8-bit, colourful aesthetic is fantastic, and really looks great! I couldn’t imagine this game looking any different, and feel that this plays a key role in helping the game seem like a homage to the SNES generation (and the couch co-op games that used to be a blast back in the day).

Once the stage has been set, it is time to Mambo and do battle! Unlike a lot of arena battle/fighting games, De Mambo‘s controls are as simple as they can get. All of your attacks are mapped to the A button, and movement is controlled via the left analogue stick. How long you press the A button for will determine what type of attack your round rumbler will perform. A tap of the A button will see spikes protrude from your character, a short hold of the button will see it perform a spin attack, and a long hold of A will have projectiles fly out in both horizontal and vertical directions. Your attacks do not damage your opponents, but instead they will send the coloured balls flying around the arena, crashing uncontrollably into the environment. This keeps up until eventually the walls break, and soon after someone exits the screen – losing one of three lives. Lose all three and you are out!

It may take you a few attempts to get used to these controls (and the single player mode does help you hone your skills), but soon you will be pulling off these attacks with ease – it is that simple! Your character can also make use of a triple jump ability by pushing up on the left analogue stick (one push to jump in the air and then up to twice more while airborne) and a ground slam to bring you back to earth with a bang!

This minimal control scheme fits the Nintendo Switch exceptionally well when using a Joy-Con each during multiplayer bouts. It will not take long for novices to pick up and play – even those with big hands should find that they can use the compact Joy-Con without too much difficulty when playing De Mambo. The question is, will you use skill and finesse to win, or will you find that mashing the A button and hoping for the best is your chance for victory? Either way works well to be fair, and I often find myself using the latter – even though I start with the intentions of trying to win using the former…

Stepping away from the game’s main attraction, there is a Survival mode – which can be tackled either alone or with friends. This mode plays like a chaotic Space Invaders, with waves of enemies (increasing in number as you progress) descending down the screen towards you with the aim of destroying the ground you are standing on. You will need to attack these enemies to prevent them from achieving their goal – and with high scores given to those that take out the most enemies, this is definitely a mode that is best with friends. Who doesn’t want some friendly competition? 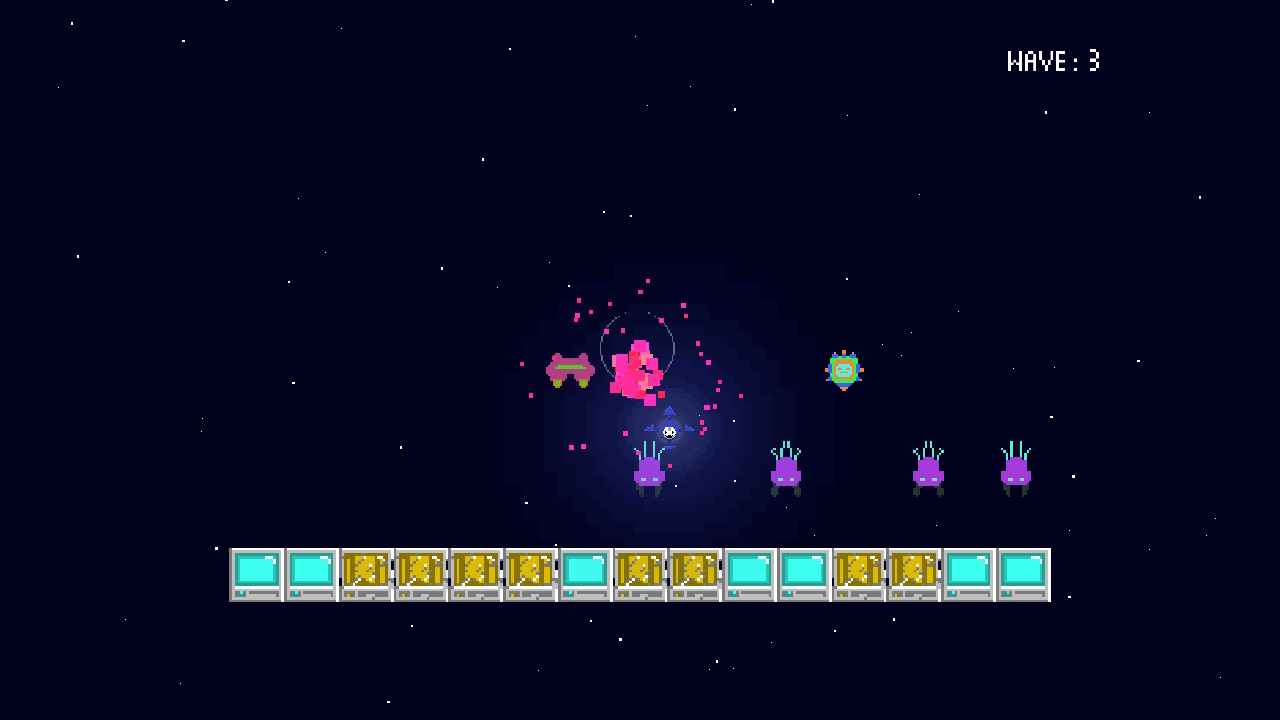 Keeping up with the comparisons, De Mambo also has a solo mode that has whiffs of WarioWare about it. This mode is a little different to the others and sees you tasked with completing sets of challenges that increase in difficulty. These challenges are all timed, and range from using your platforming skills and finding keys to unlock doors so you can escape, to finding collectables before a timer runs out, or defeating all the enemies on screen before the clock runs out. Completing a challenge sees you climb the “Tower of Destiny” (think a load of CRT TV’s stacked on top of each other) to the next challenge, with you beating the difficulty level completely once you reach the top.

Each difficulty level sees the number of challenges you need to beat increase (with around seventy in total), and you are given a set amount of lives on each difficulty level to beat these challenges with. Losing all of these lives will see your progress reset, meaning that you will have to start again from the bottom of that difficulty’s tower. This mode is rather challenging, and I found some of these levels to be rather brutal during my first few goes.

However, after a few attempts you will quickly learn the layout of the level and what is required to beat it – giving you a rewarding sense of achievement when you topple that tower that has been causing you great difficulty. The only complaint I have about this mode is that controlling your coloured ball in the air can feel rather floaty, which isn’t ideal when you are tasked with some precision platforming and are down to your last few lives.

If you are predominantly a solo player, the addition of online multiplayer or the ability to play the multiplayer mode against AI-controlled characters would make this package a lot more appealing. Although I could go back and try and beat my best times in solo mode, I’m not in any rush to go back to it.

So with that in mind, if you have no one to share the joy with then De Mambo is probably not for you. If you’re looking for a new, addictive game to play with friends, however, De Mambo is a title that feels right at home on the Switch – very much feeling like it was designed with the console’s Table Top mode in mind!

De Mambo is a game that definitely needs to be played with friends for you to get the most out of it. Although the solo mode is challenging and rather unique on the Switch, it can be beat in a few hours and doesn’t offer much in the form of replayability. However, if you add a few friends to the mix and hit up the multiplayer modes you will find hours of fun with this game. With a simple to pick up yet difficult to master set of gameplay mechanics, it’s not hard to find yourselves hooked on battling it out; vying to see who can become the De Mambo king (or queen) amongst your local circle of friends!

One thought on “De Mambo Review”