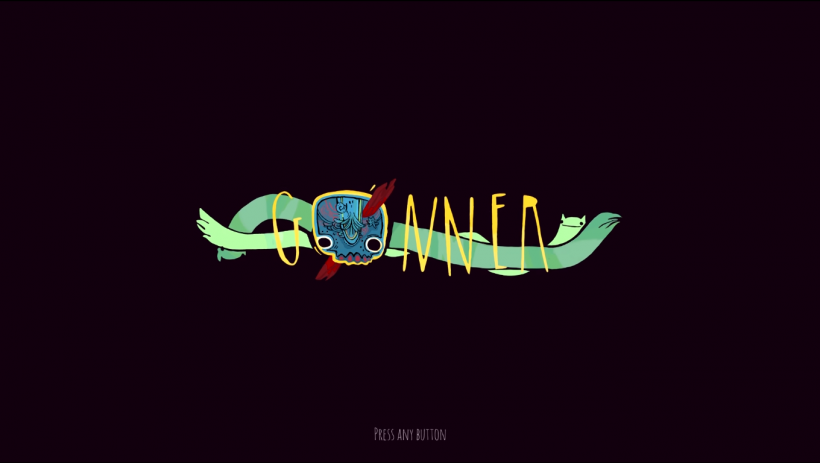 You are GoNNER want this one if you are a roguelike fan.

As someone who considers themselves a very passionate gamer, I also tend to identify as someone who’s better than most people at video games. While that may seem egotistical, or even unsavory, I’ll have you know that the game GoNNER has shifted this perspective; definitively hampering my personal opinion when pertaining my skills as a gamer. It has taught me humility in a way no game has for quite a while.

GoNNER is a randomly-generated roguelike where you take control of Ikk – a sentient water drop who’s seeking a gift for his friend, a harmonious whale named Sandy. On his journey, he’s met with horrific cave monsters, intimidatingly infernal machines, and even Death (a concept which you should expect yourself to become quite familiar with throughout your various play sessions) himself. The story is one that while not explicit, is assuredly interpretive with its torturously rare stills of art. With the aesthetics of an abstract children’s book, GoNNER features four distinctively unique worlds that are coated in a ghastly cacophony of colours. Amongst these worlds I shot, collected, and platformed through mazes of enemies – eventually reaching a boss level at the end of each of these transcendental worlds. Regarding those bosses, I fought bats which resembled splotches of flying red, a decrepit golem which was akin to a patched plush toy, and even snakes which were streaks of bright and alarming colours. However, the abstraction in GoNNER isn’t just an aesthetic or story choice, it’s a thesis to how the game functions as a whole amongst every facet. 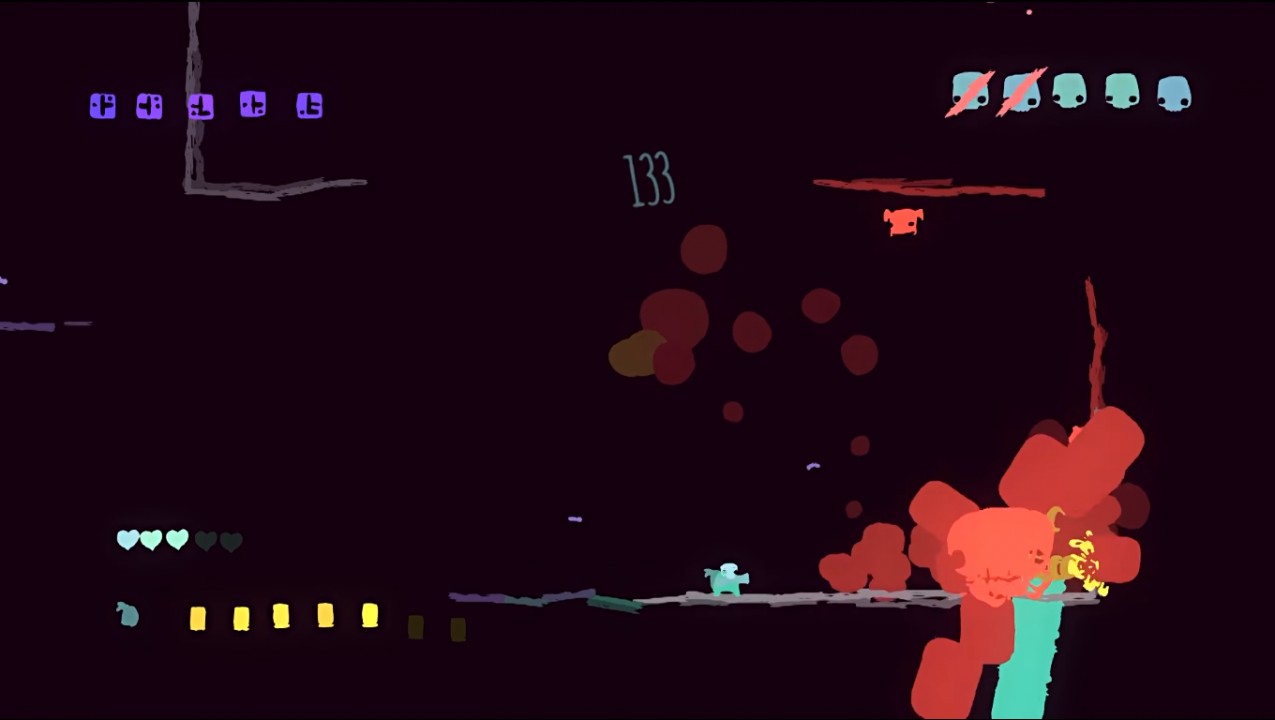 This abstraction is also inherent with GoNNER’s difficulty and design. As with many roguelikes – such as The Binding of Isaac and even the most recent Dead Cells, each run feels purposeful, and with the similarities of previous runs you eventually get a handle on the familiarities within the game’s design. You’ll become a better player not just by leveling up different parts of your character, or ensuring that your store has better items when you come across it next, but mostly through personal knowledge of the game as a whole. While GoNNER doesn’t have as much variety in terms of the choice in gameplay difference and gun-type, it makes up for this with each level feeling threateningly unfamiliar with each attempt. As I ventured into the caves (the game’s first set of levels) for what seemed like the 50th time that day, conquering it many times before, I still had the worry that I could easily die due to not being attentive to the ever changing labyrinth. 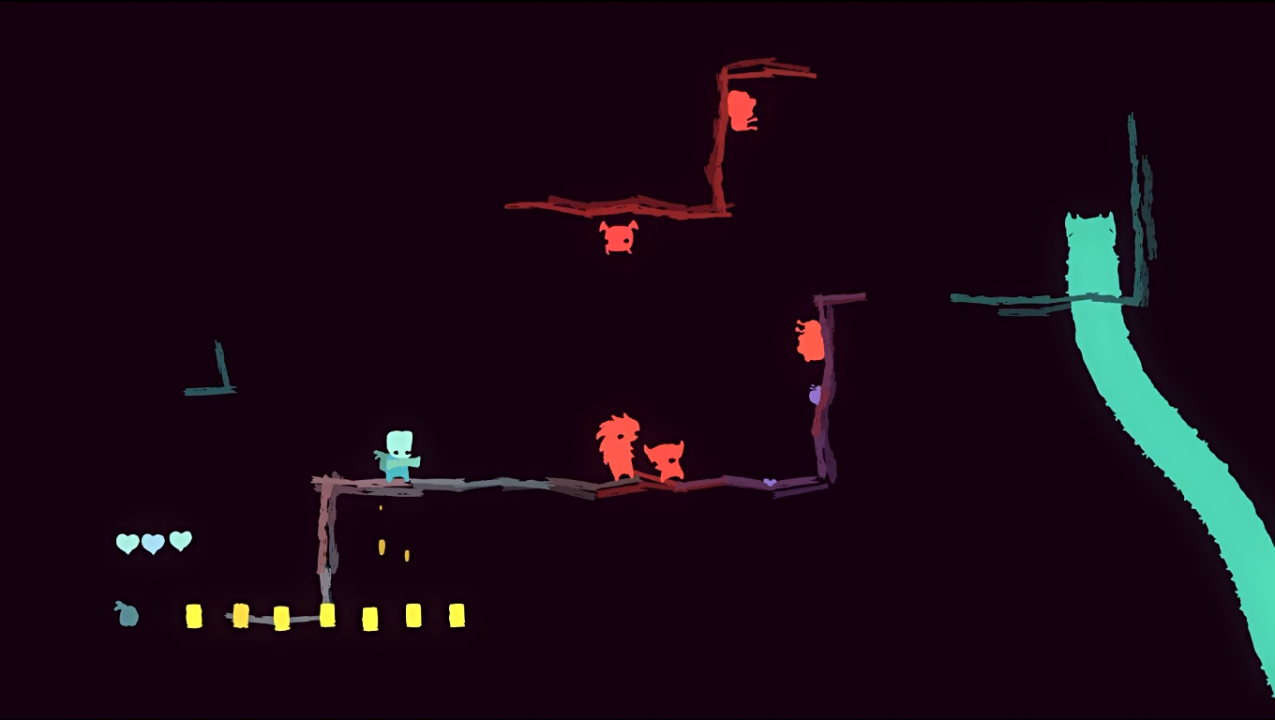 As for the weapon and gameplay variety which carries past each run, there are no descriptions to rely on for each new item you receive. Not a single word is written for any of the game’s various pieces of equipment. As such, a lot of your time will be spent finding and testing new weapons, buying and trying new headpieces (which drastically change gameplay with Glyphs – the game’s currency), and acquiring and experimenting with new backpacks (which cause your jump function to work differently). At the beginning of each run (and if you die and have enough Glyphs to re-spawn) you’ll be able to choose which of the various items you’ve collected beforehand you’d like to take right back into the shooting and platforming action.

I can’t stress this enough; GoNNER is one of the most difficult games I’ve ever played on my Nintendo Switch, and this is even after attempting to delve into the recently released Master Mode in The Legend of Zelda: Breath of the Wild. While it never comes off as aggravatingly frustrating due to the quick and brief play sessions (it fortunately plays into the “one more run” mentality quite easily), I’ve died many times due to the ever unfamiliar level design and overwhelming amount of enemies. 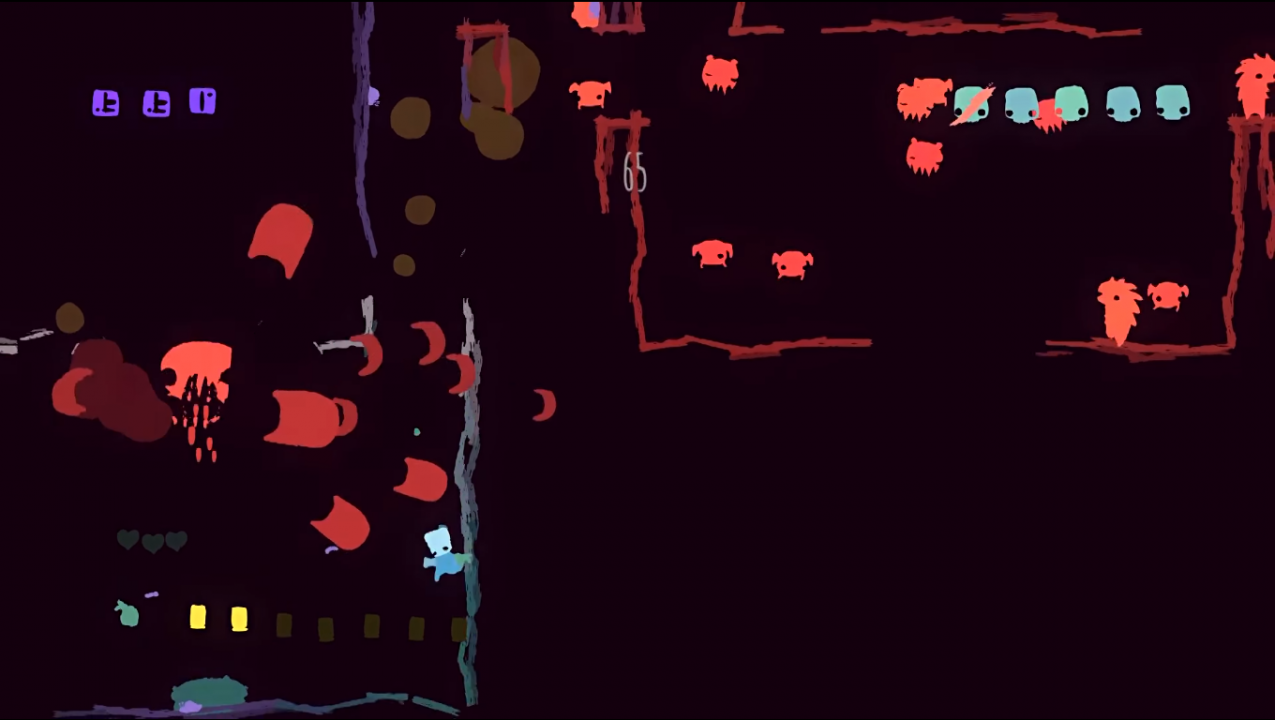 Every death doesn’t feel like it’s the game’s fault, but an error in my own skills – which purposefully puts me towards the mentality that I have to be able to perform better. Whether that means pulling the trigger faster, having tighter awareness of the controls (I can’t stress enough how splendid they are), or making small changes to my equipment set; I was always able to progress in the game by imparting more awareness with what the game could possibly throw at me.

GoNNER is a game full of hardships and difficulty, both within its gameplay and story. Its enchanting dreamlike aesthetic may have definitely piqued my interest, but for the unforeseen future I’ll be decidedly shooting and jumping through its many worlds each day. Its many secrets, game design, and calculated abstraction provide testament to the type of independent games the Switch should strive to make a home for. Plus, as GoNNER is an ambitiously replayable game full of individuality, and being that it fits greatly within the portable’s versatility, diverse library, and core message of great games, it should be one to keep in mind for a long time coming.

While GoNNER may be brutally hard, there’s plenty to find rewarding if you’re someone who doesn’t get frustrated too easily, or who can appreciate the diverseness that the randomly generated roguelike can exhibit. Underneath the game’s pastels of bright and intense coloring, there’s great gameplay systems waiting to be explored. If you’re the type of person who loves tight 2D platforming and shooting in your games, then GoNNER isn’t something to be slept on.