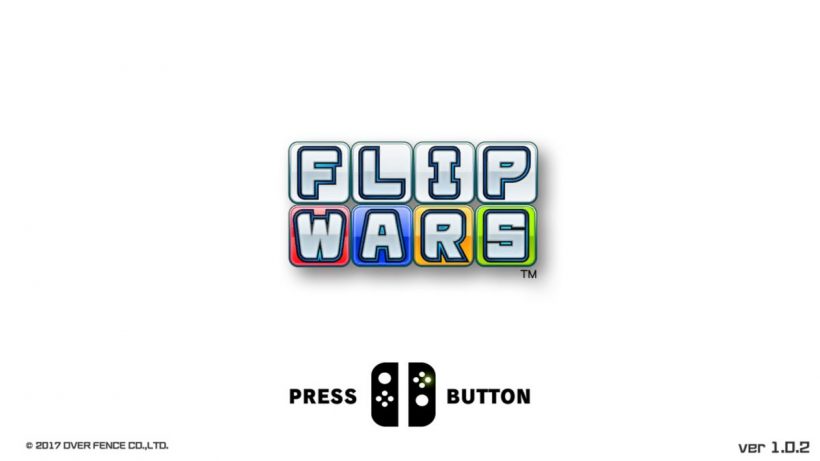 With Snipperclips a stellar first first-party entry into the Switch eShop catalogue, Flip Wars – released in mid-July – is the next offering.

While it does employ the same pick-up-and-play ethic of the cutting-out puzzler, that’s where the similarities end between the two titles. Flip Wars places the focus on the battling, the head-to-head multiplayer which crowns the best as the winner and the rest as the also-rans.

To give the best effort possible at trying to sum up exactly what Flip Wars is, this is a Nintendo title which takes bits from many games already on Switch. We get from Splatoon the idea of covering the field in as much of your colour as possible, Othello the concept of flipping tiles in order to do so, and Bomberman‘s viewpoint of the grid – with players frantically running across the tiles to try and blast their opponents off the board.

Up to four players can take part both locally and online, and gameplay involves running from tile to tile, hitting the A (or right-most button if you’re playing with a single Joy-Con) to leap into the air. Once you come crashing down, you shift the few tiles vertically and horizontally around you from white to your colour (either red, green, yellow, or blue).

Of course, up to three other players will be looking to do the exact same thing, so as they jump and land your tiles could become their tiles – and vice versa. In Panel Battle (the game’s most quickly approachable mode), the person with the most tiles when the time limit hits zero is the winner. It sounds basic – and it is, but there are a few discerning factors to give the wars some tactical nuance.  For instance, some weapons can speed you up (movement is quite slow unless you walk on tiles which are already your colour), while others can change your blast radius to diagonal.

Another mode to select from is Knock Out, a format which reeks of the multiplayer seen already on the Switch in Bomberman R. The onus here is not on covering the field in your own coloured tiles, but blasting your opponents off the board as much as you can before the clock strikes zero.

The third and final mode is a slight expansion on this, as Life Battle has you given a set number of lives. When you’ve been relieved of all of those however, your game is over. You can amend the time limits and live counts yourselves, so games can last from thirty seconds up to five minutes.

A series of different boards give a variety to the play. They’re divided into blue, green, and yellow; the first and last of which elementally affect gameplay in their own way. The watery blue sometimes has waves pass under the board knocking everyone off balance, and yellow sees lightning surge through the arena striking all in its path. These three all have four separate choices. “Normal” is just a plain battlefield, “Electric Shock” has a central button which flips all tiles around it, “Beam Cannon” has a blaster in the middle which can be set off with a ground stomp, and “Expert” throws a few dead blocks in the way to lower your flip radius.

It’s enough to suggest that online matches won’t be overly repetitive; dealing with the elements gives the game some of the complication needed to attract a bit more committed of an audience.

Sadly though, the online community at launch appears to be sparse. Of course, being that it’s at such a cheap price point it’s likely that a lot of people will take the plunge with Flip Wars in the weeks to come – but for the time being in its first two weeks of release, it’s proven tough to get an online match with any random opponents (let alone a full set of three). I’ve tried at different times of the day, but still the same outcome.

Even without many real-life opponents to take on though, the action is challenging and still very much fast-placed with COM players. They can be picked from a choice of three difficulty levels, and even the lowest gives you a chaotic match which can swing in an instant.

Thankfully for this reviewer, a key update to the game came on August 3rd – adding a number of new and important features. On the main menu, the “Achievement” option (formerly greyed out with a coming soon sign over it) is now “My Room” – and serves to tally up all of your records and rankings for both local and online multiplayer battles. It was the same greyed-out story for the ranking option, until the update. Local area battling between multiple Switch units is still out of action however, and listed as coming soon. While the game is of course still incomplete, it’s aesthetically pleasing to see that it’s no longer the case that half of the key menus are filled with options that you can’t make use of yet.

The music of Flip Wars harks back again to Bomberman as glitzy, bouncy techno riffs fill the menus and the main action. Sound is conspicuously absent when selecting options in the menu however, and as you see the screen flit from menu to menu through a shifting camera you expect to hear some kind of sound effects. Instead, all you get is dead silence. Normally it’s a nitpick, but it is very noticeable here.

In all – and now that it’s closer to finished, Flip Wars is a game which is at its best when taking on three friends in the same room for fast and frantic battles. At its worst, it’s an infuriatingly difficult game as far as the top COM players go, and not one that you’re going to dedicate too much time to – especially if you have the more pressing matters of ARMS and Splatoon 2 to tend to. Whether that means Flip Wars is for you is ultimately up to you to decide, however; I’m just the messenger.

Flip Wars is a good bit of multiplayer that’s fun in short bursts, and does offer something of a challenge to single players – even if the game itself is incomplete for the moment. It’s certainly one to keep an eye on as the features start falling into place, especially since you can expect Nintendo to support this one with content for months to come.