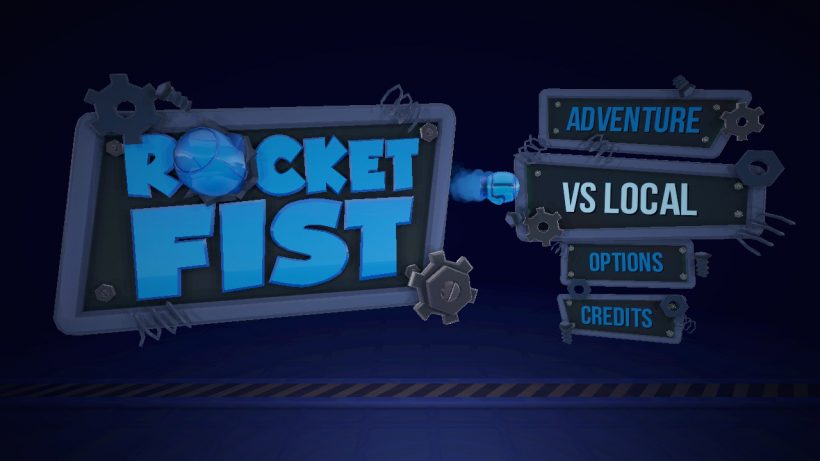 The Nintendo Switch lends itself perfectly to games based around a very simple set of controls, short bursts of multiplayer action, and – ultimately – fun. We’ve seen games such as De Mambo and Overcooked: Special Edition hit the Switch’s eShop in recent times, and they’re two great examples of this mantra. Bringing Rocket Fist to the console seems to be an attempt at continuing this trend, so let’s see if it’s a success.

The game features a solo-player adventure mode and a VS local multiplayer mode, although the controls and your ultimate aim are always the same no matter which of these you pick. You take control of a robot – a customisable robot in fact, as you can choose from a selection of different colours and costumes including Santa Claus, a unicorn, and a fez (If that hasn’t already won you over then I don’t know what will). Once you’ve spent slightly too long debating whether or not you look better as a pirate or a teapot, you’ll be ready to jump into the action. 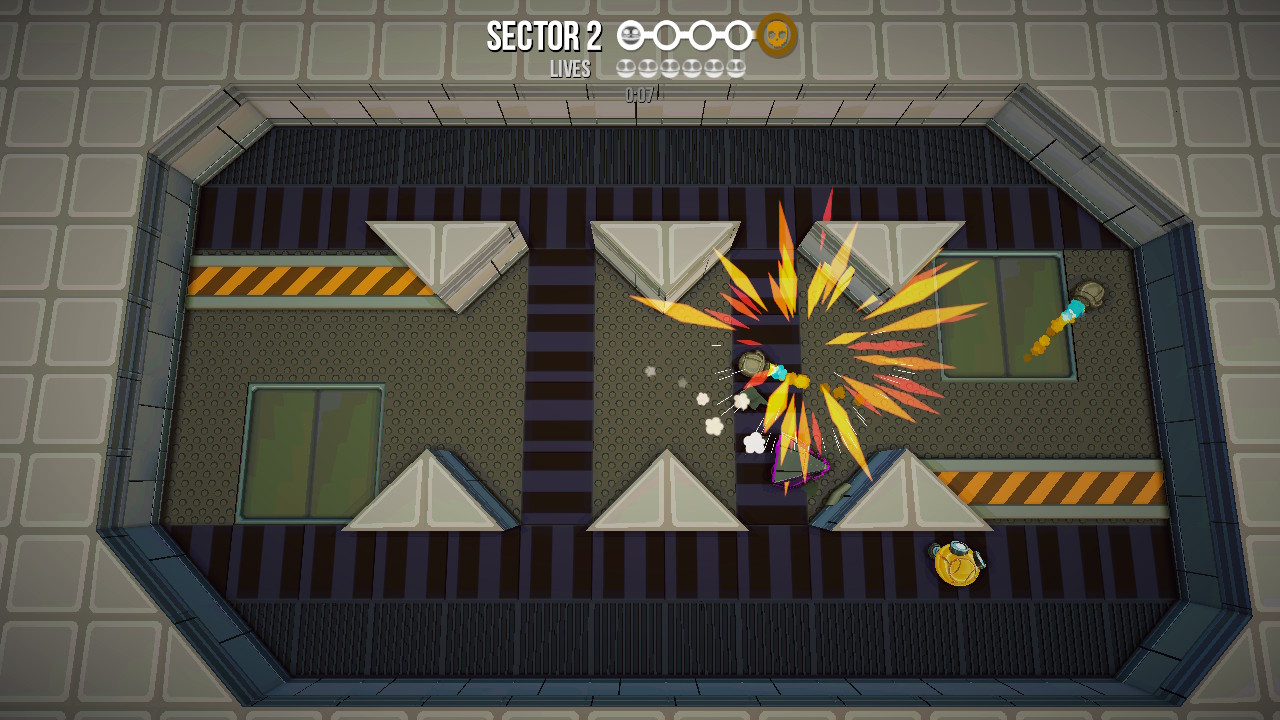 You are then placed in a small arena alongside enemies, ready to start the ultimate game of dodgeball (one that most definitely wouldn’t be allowed in the school gym). Dotted around the arena are fists, and the idea behind gameplay is simple; pick up a fist and launch it at your opponents before they can do the same to you. The reality however, is not so simple – there are a finite amount of fists available, and anyone can pick any of these up at any time. This means that it is a constant race to grab a fist before someone else, trying to line up a shot if you got one, or running away as fast as possible if you didn’t. The magic lies in the fact that once a fist has traveled a fair distance after being launched, it will cool down – becoming ready to be picked up once again. Therefore, if you are able to narrowly dodge an attack, you’ll likely be in a position to pick up their weapon; and if you pick up their weapon, you can send it right back at them whilst they’re vulnerable. It’s fast paced, rather chaotic, and a whole lot of fun in the right setting.

As previously mentioned, adventure mode is a solo experience. Consisting of five sectors (plus Sector Zero which is a tutorial), this mode sees you travelling through various stages full of enemies in the quickest time possible. Naturally, each sector is tougher than the last, with new enemy types being introduced as you progress. Starting with very basic types that travel slowly and die with one simple contact, the game soon ramps things up with enemies that have stronger attacks, ones that can only be defeated by punching them in the back, and even some spider robots that multiply when you first hit them. These different types are a very welcome addition since otherwise the “adventure” would be very repetitive – the fact that you have to keep an eye on which enemies are placed in the arena with you certainly keeps you on your toes.

Each sector has a boss level should you make it to the end, which is easier said than done as you’ll lose lives with every hit you take. Losing all of your lives puts you back one stage in the sector you are currently in (unless you’re in the first stage), so to make it to the boss you need to keep as many of your lives intact as you can – hopefully arriving there with most of them still remaining. You can choose to play through this mode on either Easy, Normal, or Hard difficulty; the latter being a real challenge. For posterity sake, the game even keeps track of how you perform in each sector and on each difficulty independently, saving your best times across the board for review.

The VS Local mode is perhaps where you’d be expected to spend most of your time in Rocket Fist, as it’s the option your cursor is ready and waiting on when the game loads up. Gameplay is exactly the same here, so expect to see familiar arenas and play much the same. The difference here is that you are now against up to three of your friends (or a combination of friends and CPU players) in a crazy fight to the death, meaning anything can happen (including tons of fun). There are two types of match you can play, each of which have slightly different set-ups.

In Deathmatch, you choose how many kills a player needs to win (up to a possible 15). For clarification, this means that as soon as a player reaches 15 kills across all other players, they are declared the winner. In Survival, you choose how many lives the players have instead (again up to 15). The best thing about this multiplayer mayhem is that a round will keep going until only the last robot is standing, at which point you are all thrown back in to start the next round. So for example, if you are wiped out first in a round, you’ll be sitting out until only one person is left – your opponents racking up kills while you ride the bench. This structure means that it is essential to stay safe rather than just attacking anything that moves, as you don’t want to be eliminated at the start of every round.

You can also opt to throw items into the mix at varying degrees of franticness (which is a real word apparently). These appear as squares on the battlefield for you to pick up – although interestingly, appear to go flying should they be hit by a rocket fist. Contained within them are powers such as a protective bubble that acts as a shield, a power that makes your movement much faster than other players, and even a slow motion item that works on every player left in the arena. These powers actually work much like the items in the Super Smash Bros. series, should you be familiar with them.

As well as all this, the option to appear as a ghost should you be eliminated is also available. This allows you to interfere with play whilst you wait to be thrown back in, and will certainly help to keep you occupied during your “down” time. 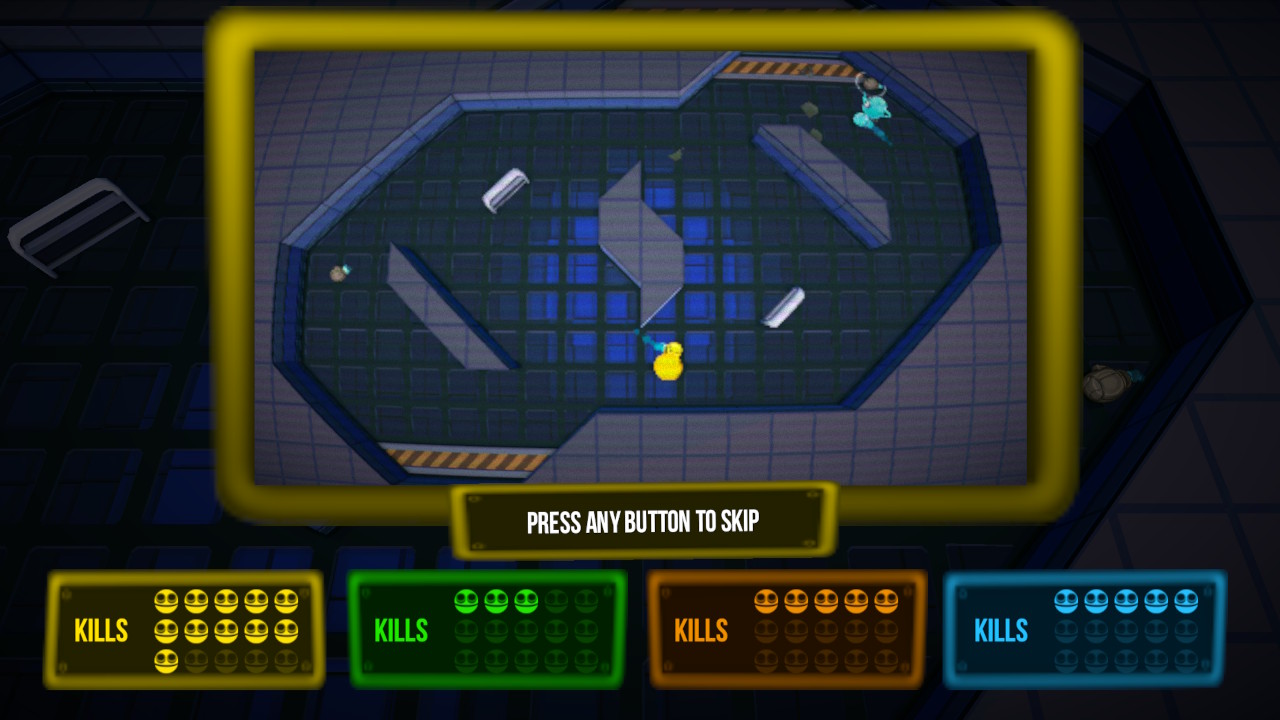 With a variety of costumes and arenas to choose from to keep things fresh, as well as the fact that the controls are incredibly simple (literally just moving with the control stick and using B to either dash or fire a rocket when you have one), Rocket Fist is a great game to stick on when you have friends round and want something that everyone can enjoy immediately. Of course, experience will still help you defeat newcomers on the whole, but the frantic pace of the game and its “pick-up-and-play” nature means that anyone could easily win a round.

The visuals and soundtrack add to the experience too – suiting the gameplay nicely. That said, this writer found that the game looked much more crisp on the Switch’s screen as opposed to its appearance when docked. As such, you’ll definitely want to use your TV and have everyone huddled around it for multiplayer madness, but for solo sessions I’d recommend playing in handheld mode for the ultimate experience.

So should you get Rocket Fist? I’m going to say yes (for the most part), but hopefully you’ll have already come to that conclusion somewhere during the course of reading this review.

Rocket Fist is the type of game that almost everyone can jump into and have a good time. As with many games of this nature however, recommending the title to players who primarily play alone is tough. The adventure mode is enjoyable – but it’s also short, and perhaps not worth the asking price alone. That said, multiplayer is where it’s at. All you’ll have to do is hand a friend a Joy-Con, and soon you’ll be beating each other senseless with rocket-propelled robot fists – laughing like crazy.