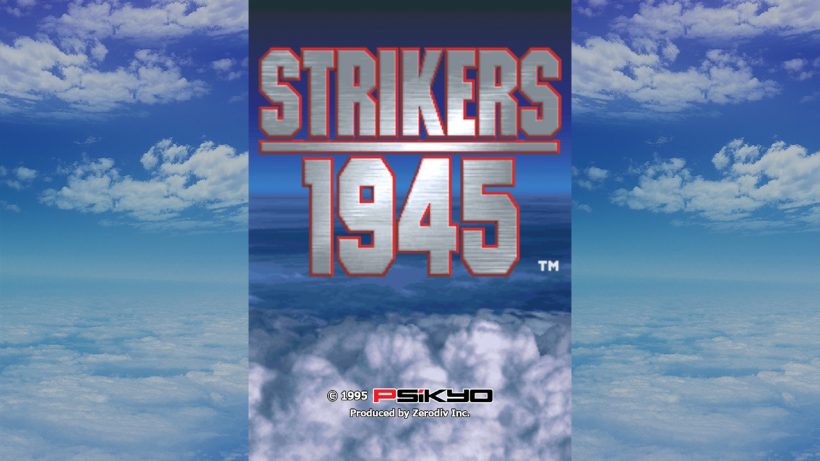 The idea is simple; load up the game, pick a plane, blast things to smithereens. Of course the reality isn’t as easy as that, but there is no plot surrounding the action which makes STRIKERS1945 purely all about the gameplay. You fight your way through eight stages which increase in difficulty as they go, shooting down enemy planes, tanks, jets, and even buildings and scenery. Naturally, the enemies are firing right back at you with wave after wave of bullets that spread all across your screen in different shapes and sizes. You fly in all directions with the left control stick, and have buttons assigned to your standard attack (which can be held down for rapid fire), a formation attack, and bombs. 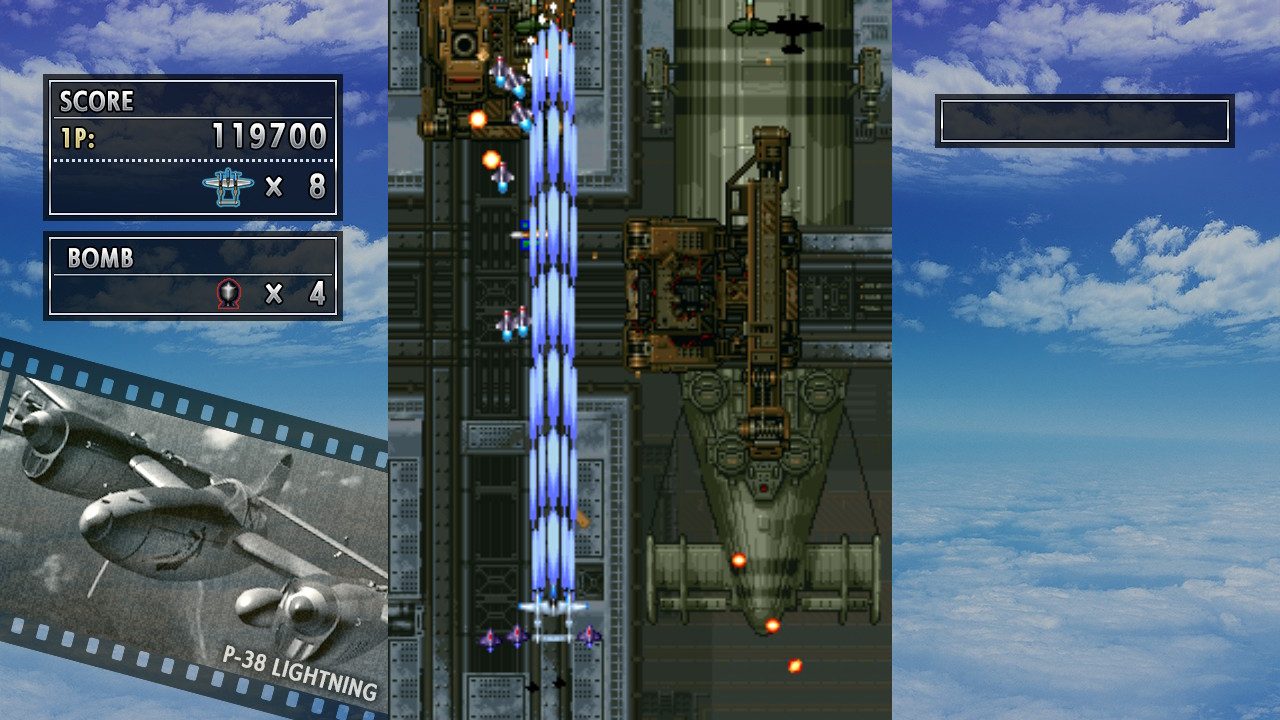 The great thing here is that each of the six different aircraft you can select have different types of attacks. For example, one might have a formation attack that allows you to place a second weapon anywhere on screen to shoot at anything in front of it, whereas another may stay in place and shoot horizontally, or even in a V-shape instead. By having a go with each of the different planes you’ll likely find some that suit how you move and shoot at enemies, and some that really do not. Personally, once I had found a plane which had a complete move-set I was fond of, I stuck with the same aircraft for the majority of my play-throughs, although you could of course keep swapping between multiple options if you prefer.

As with Zerodiv’s other recent port to the Nintendo Switch, ‘GUNBARICH’, this is a very, very tough game. Luckily, this time around the game doesn’t feel like a chore to persist with, instead offering a challenge that may well be a bit much for less experienced players, but will no doubt excite fans of earlier games such as this one. There are several difficulty options to choose from ranging from ‘Very Hard’ all the way down to ‘Monkey’, which this writer has no shame in admitting was where he spent most of his time. Again, just like in GUNBARICH, STRIKERS1945 has a system which allows you to change the amount of lives and continues from their defaults should you find things too challenging.

This is a very welcome feature as the trickiness does increase to devastating levels in the higher difficulties. Enemies’ attacks become harder to dodge in the later stages, as the screen begins to become rather congested unless you are extremely powered up and can remove them quickly. Sometimes you might find that you have trapped yourself in a corner of the screen with no escape – if your plane is one that only fires in a straight line but you have enemies pinning you in from a diagonal direction then, well… good luck! 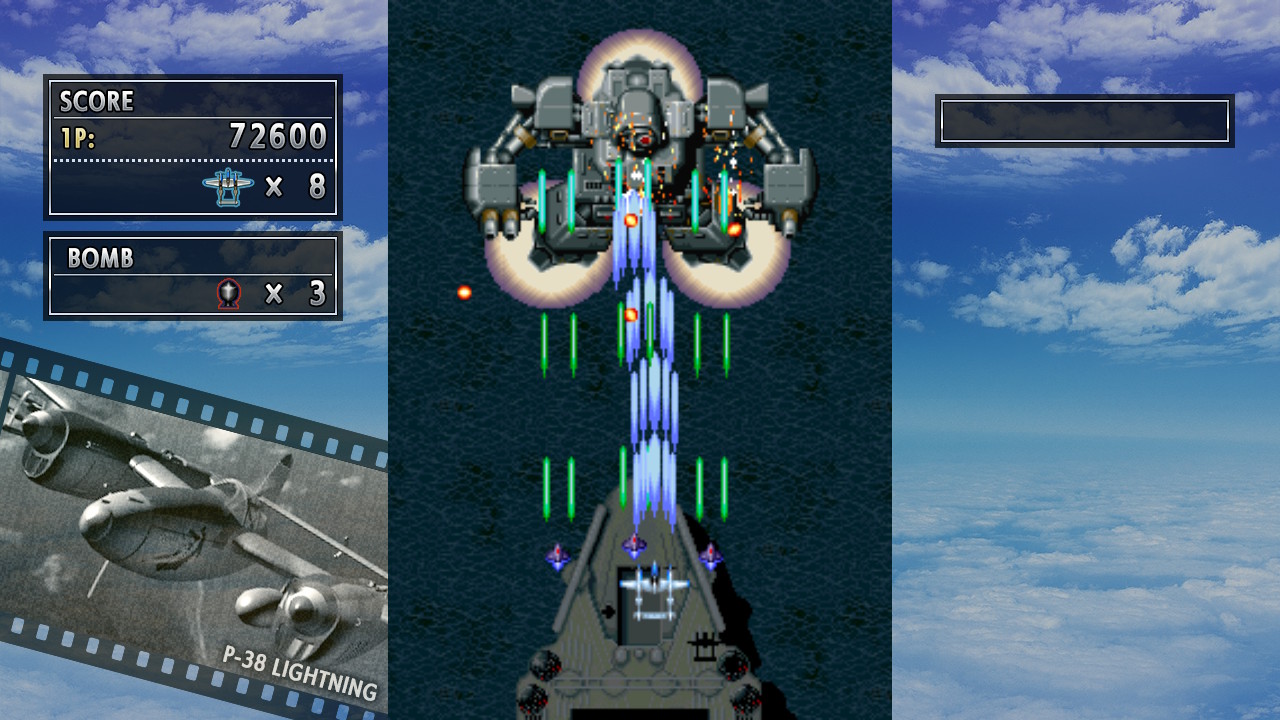 This doesn’t ever feel particularly unfair though; usually you’ll know what you did wrong, and whilst it might be incredibly hard to think of a better way of doing things, you’ll know that it is possible. Whilst I will be very unlikely to see the later stages on the hardest of difficulties personally, I still had fun with this game and felt a sense of progression each time I went back into the action. As time went on I began to learn the stages rather well, knowing exactly when certain enemies were about to pop up and where, and even which enemies contained power-ups when I blast them down which helped me to prioritise targets.

There is a local co-op mode available for those who want to take on enemies together too – simply grab a Joy-Con each, put the Switch on its side to play the game vertically in Tabletop mode (or via the TV if you prefer) and you’ll soon feel like you have a mini arcade set up in your front room. The vertical display mode is of course a nice touch, and something we’re seeing more of on the Switch as of late with titles such as Namco Museum allowing the same thing. The visuals and soundtrack are of a quality you’d likely expect from a title such as this – they’re nothing to shout about, but they get the job done and have that sense of an arcade aesthetic.

The biggest shame here is that there are no online leaderboard options. Of course, a huge part of arcade gaming is trying to get your name right to the top of the list, allowing you to show off in front of your friends and (probably ineffectively) impress the boy/girl of your dreams who couldn’t care less about your trivial success. Unless you are willing to invite the entire town round to your house for an evening of gaming, you will lose that here. Obviously, this isn’t something that should put you off giving the game a go, but it is worth noting.

Overall then, STRIKERS1945 for Nintendo Switch is an enjoyable experience. The difficulty is high, the challenge is steep, but the fun is ready and waiting and “plane” for all to see (sorry). Whizzing around, dodging bullets and placing down your formation attacks at the right time feels good, and the satisfaction from clearing a particularly tough stage with your power-ups still intact is great. The game can be blasted through in around 20 minutes if you are some sort of aviation prodigy, but you’ll likely find yourself putting many an hour into perfecting your abilities. Lovers of arcade shooters should take note and jump aboard!

STRIKERS1945 is a challenging but fun experience. As you put more time and energy into the game you’ll start to see the results of your patience, slowly being able to clear more and more of its fiendish stages. The varying aircraft options allow players to find a play-style that suits them, and the option to alter the amount of lives and continues you have means that (whilst experienced arcade lovers will get the most out of this game), players who struggle can still see the game through to the end.